This is the second time the Belgian model has been arrested after being imprisoned for posing naked at the Karnak Temple Complex near the Egyptian city of Luxor. 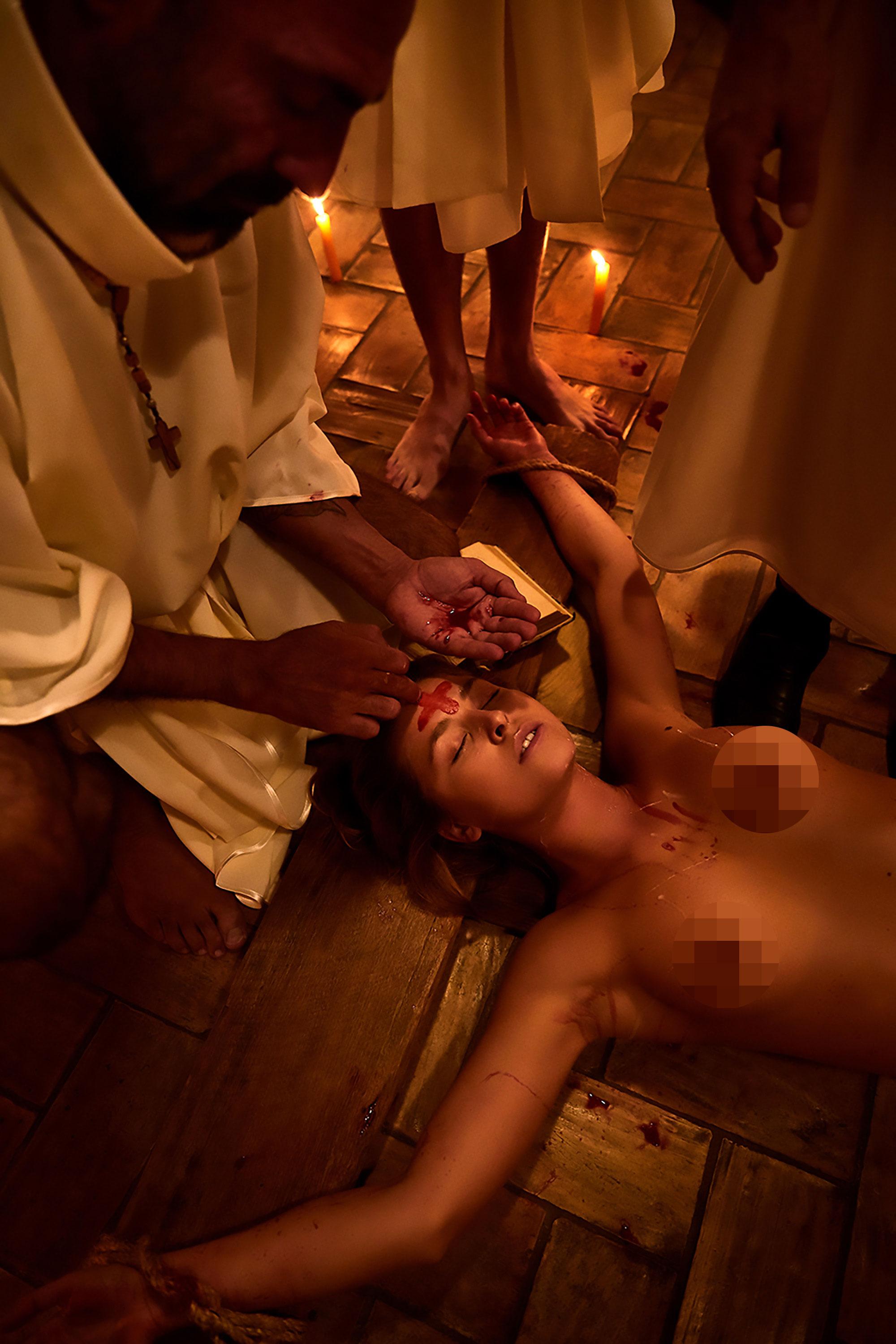 In one image from the model’s controversial photoshoot she is dragging a large wooden crucifix across the street with St Peter’s Basilica clearly visible in the background.

In another photo, the 26-year-old is tied by rope to a wooden cross as a man appears to mark a cross in red on her forehead.

The photos were taken by Australian photographer Jesse Walker, who runs the ENKI Eyewear brand, and he has taken nude snaps of Papen on multiple occasions.

A third image shows Papen sitting on a stack of bibles on the wet cobblestones in St Peter’s Square. 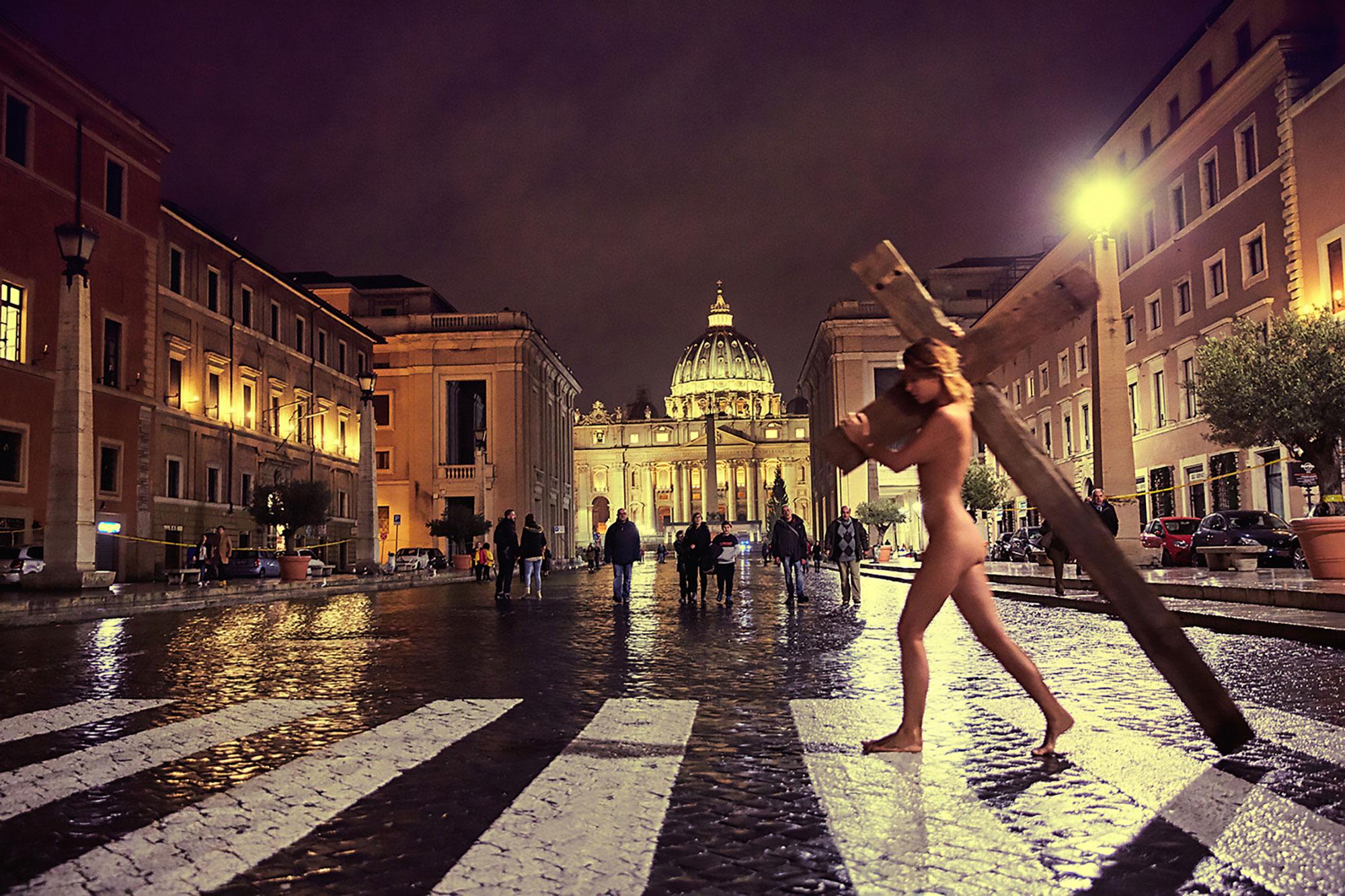 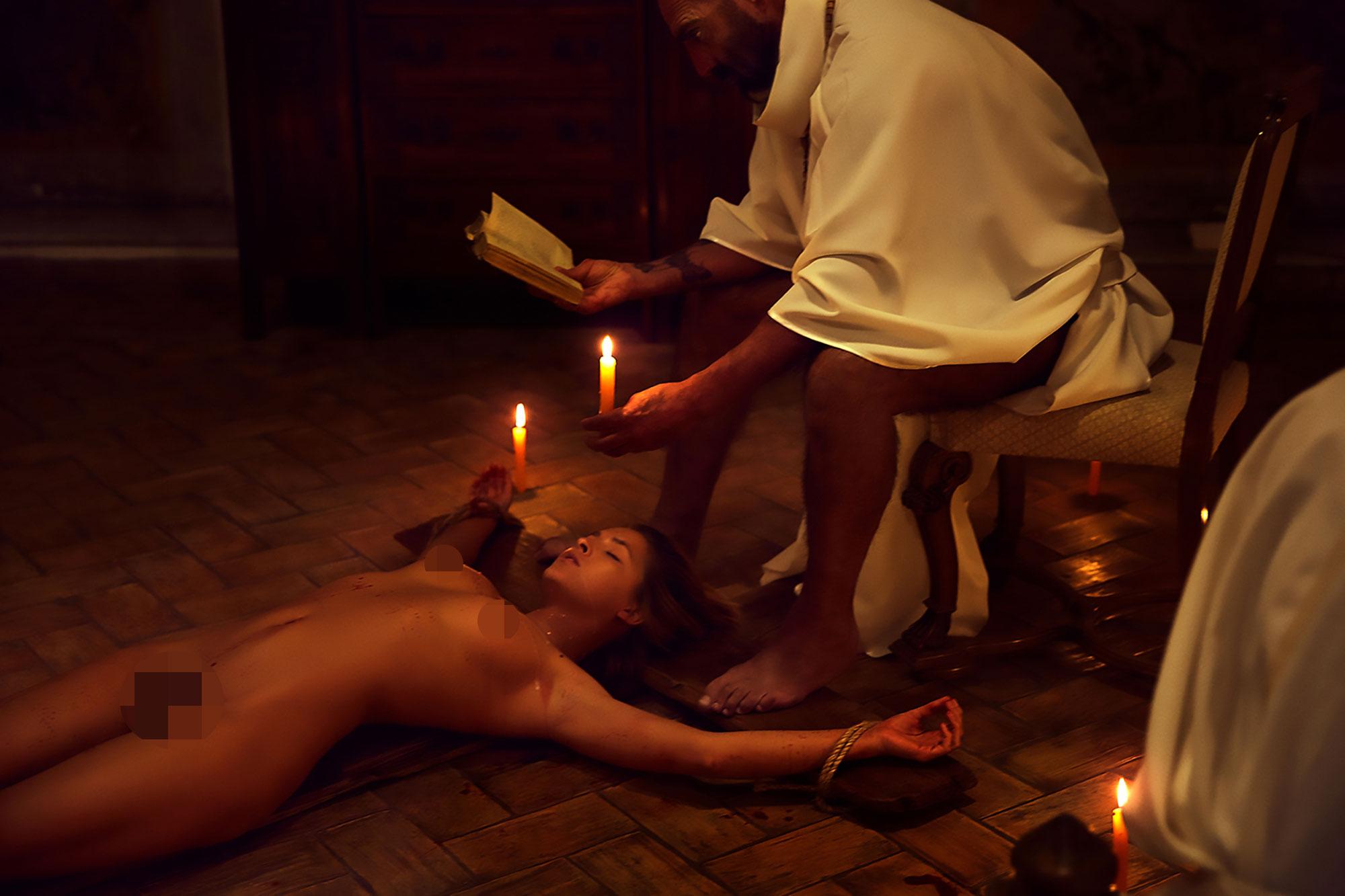 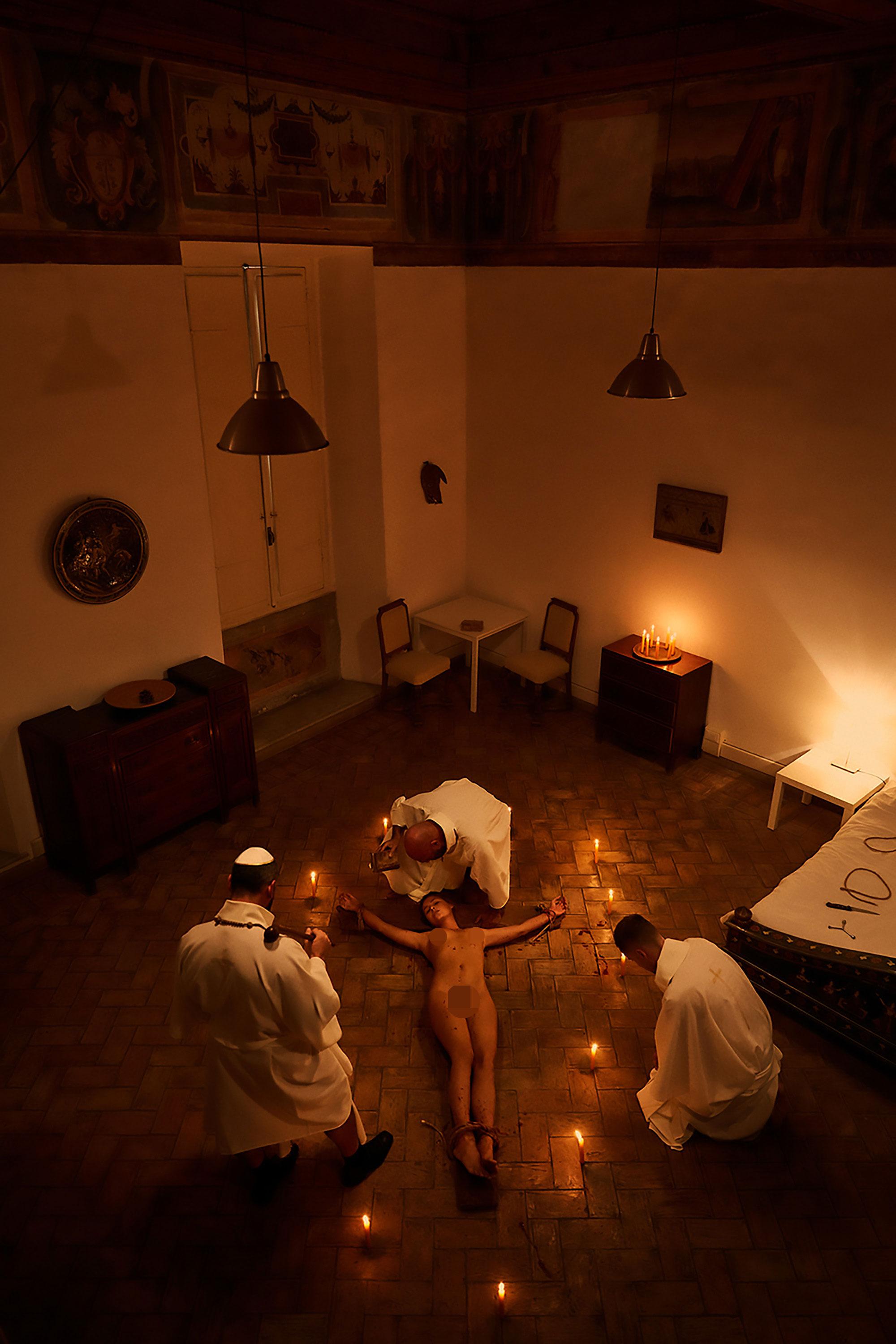 The pair was chased by Italian police after Papen and Walker were caught in the middle of the unconventional photoshoot on Sunday.

Papen said: "I was right in the middle of putting on my underwear when two police cars suddenly arrived and another four cops approached us on foot, brandishing their batons and saying 'passports please'."

They were taken to the police station where they were questioned and detained for 10 hours.

Afterwards, they were taken to their Airbnb rental apartment where cops found the large wood crucifix and other props such as rosaries, fake blood, priest outfits and a crown of thorns. 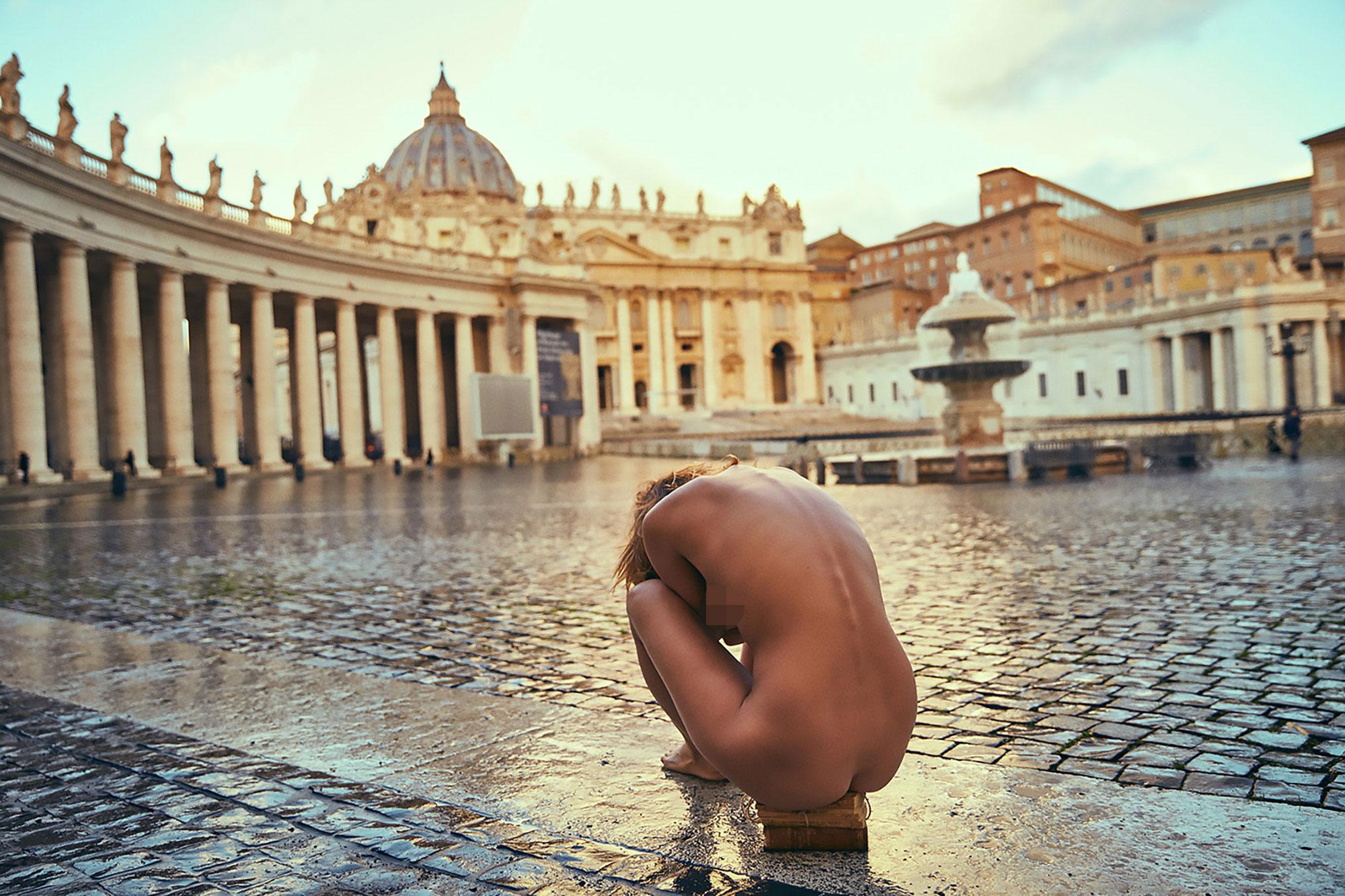 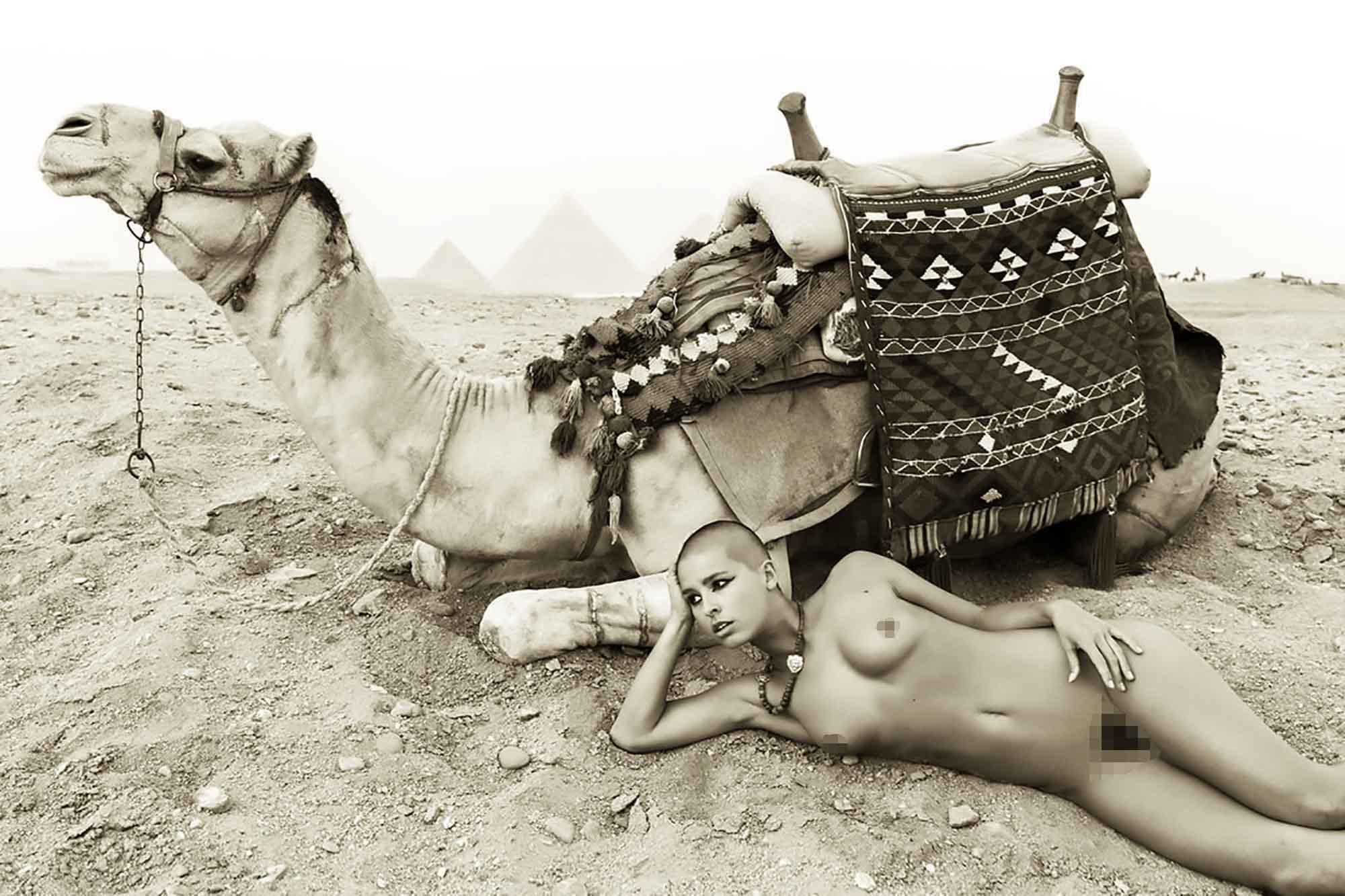 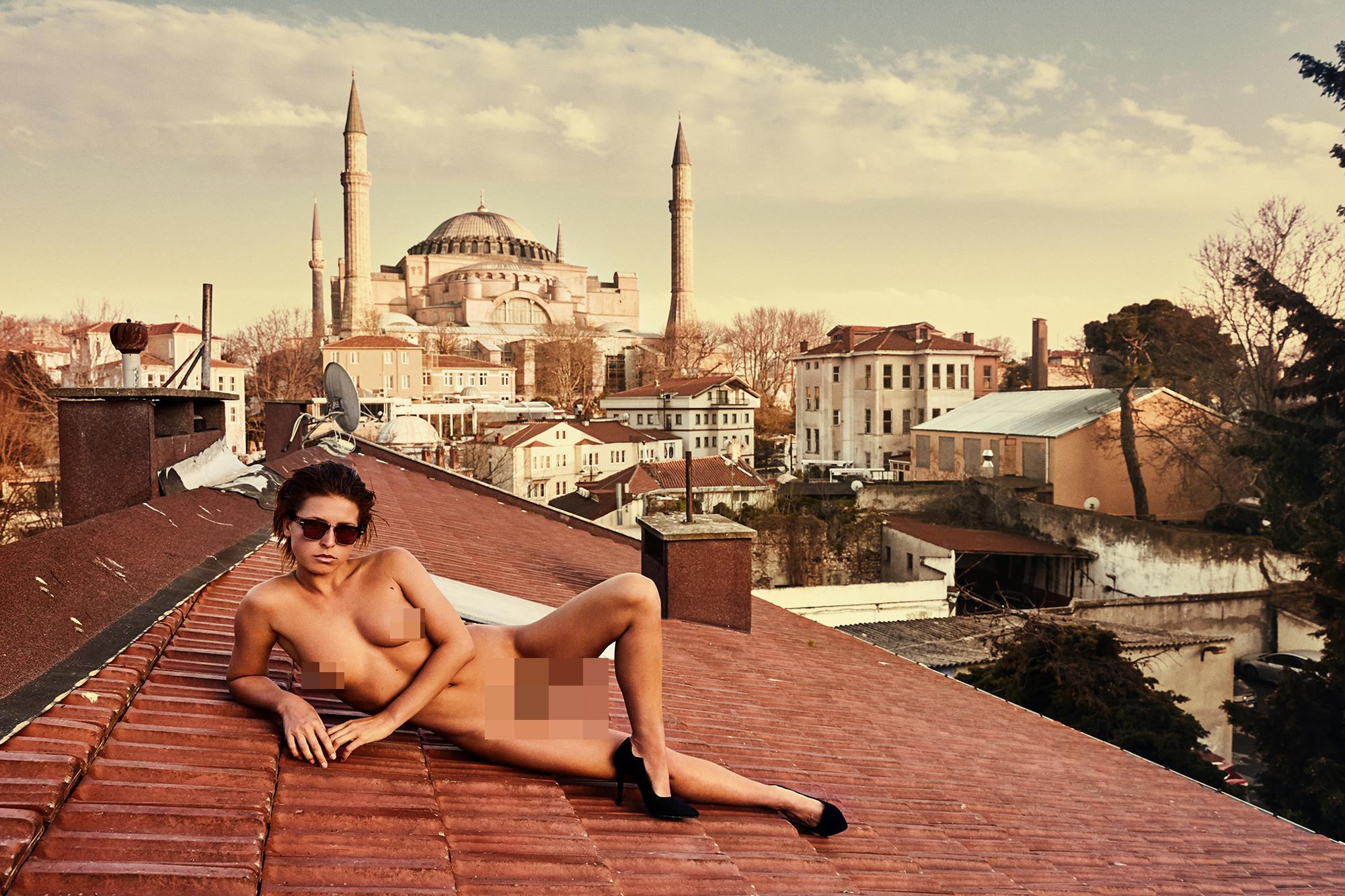 The pair had their fingerprints and mugshots taken before being released.

Papen said: “There we were again, behind bars in a tiny little cell with dirt and ash on the floor. Jesse and I looked at each other and we burst out laughing."

Papen and Walker made international headlines after they were arrested in Egypt.

She sparked even more outrage after she flashed her genital area for a photo while wearing a burka inside the iconic Hagia Sophia mosque in Turkey. 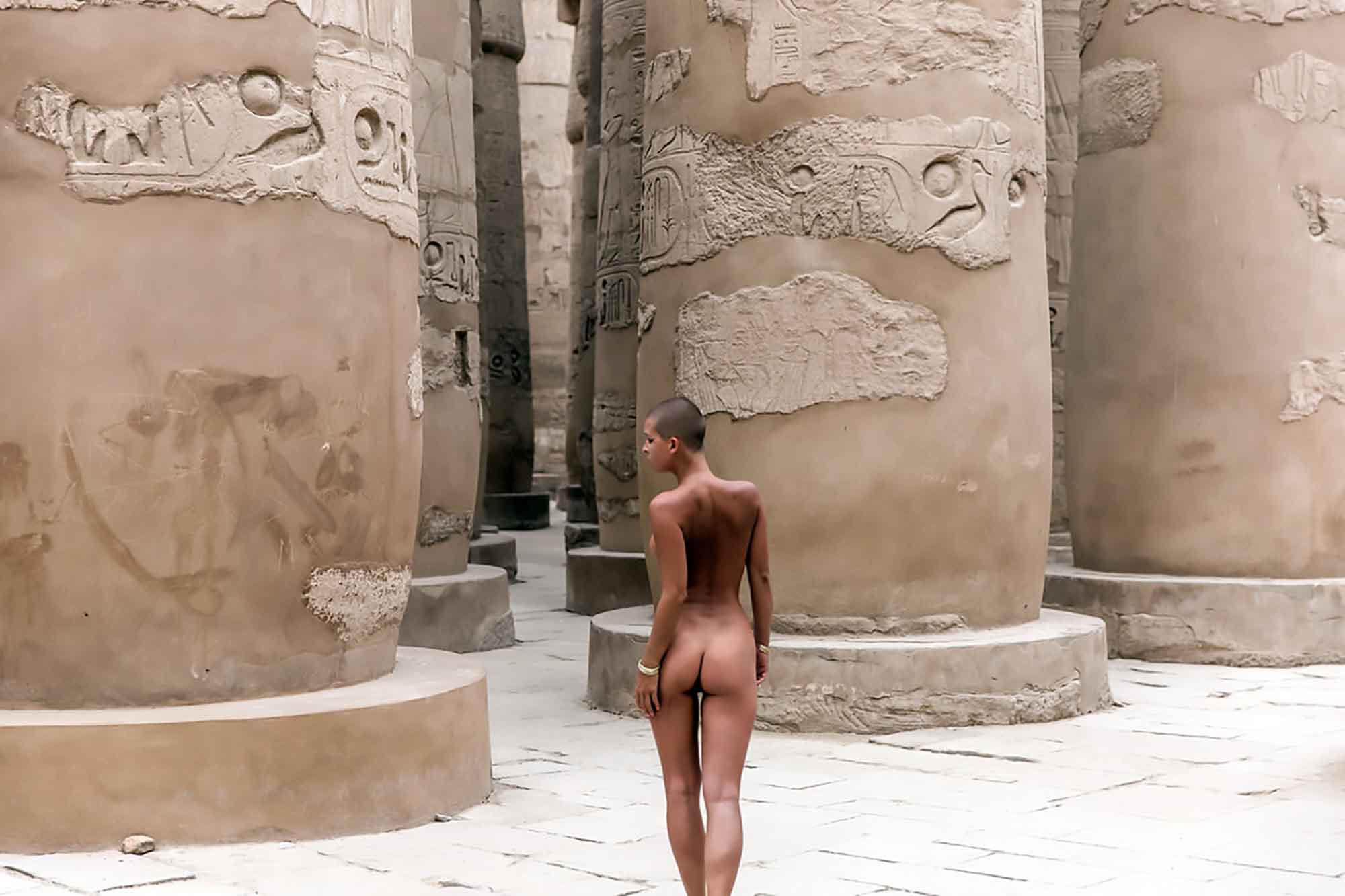 Papen, who describes herself as a "free-spirited and wild-hearted expressionist", has also posed naked in front of Jerusalem’s Wailing Wall in Israel.

Walker said they are used to getting arrested for their work.

He said: “We are willing to put it all on the line for these photoshoots even if it means jail time. It is something we thrive on and are very used to now so it is nothing new.

"I like to think ENKI and Marisa are the two most controversial artists and brand on the planet right now, and that's something I am very proud of." 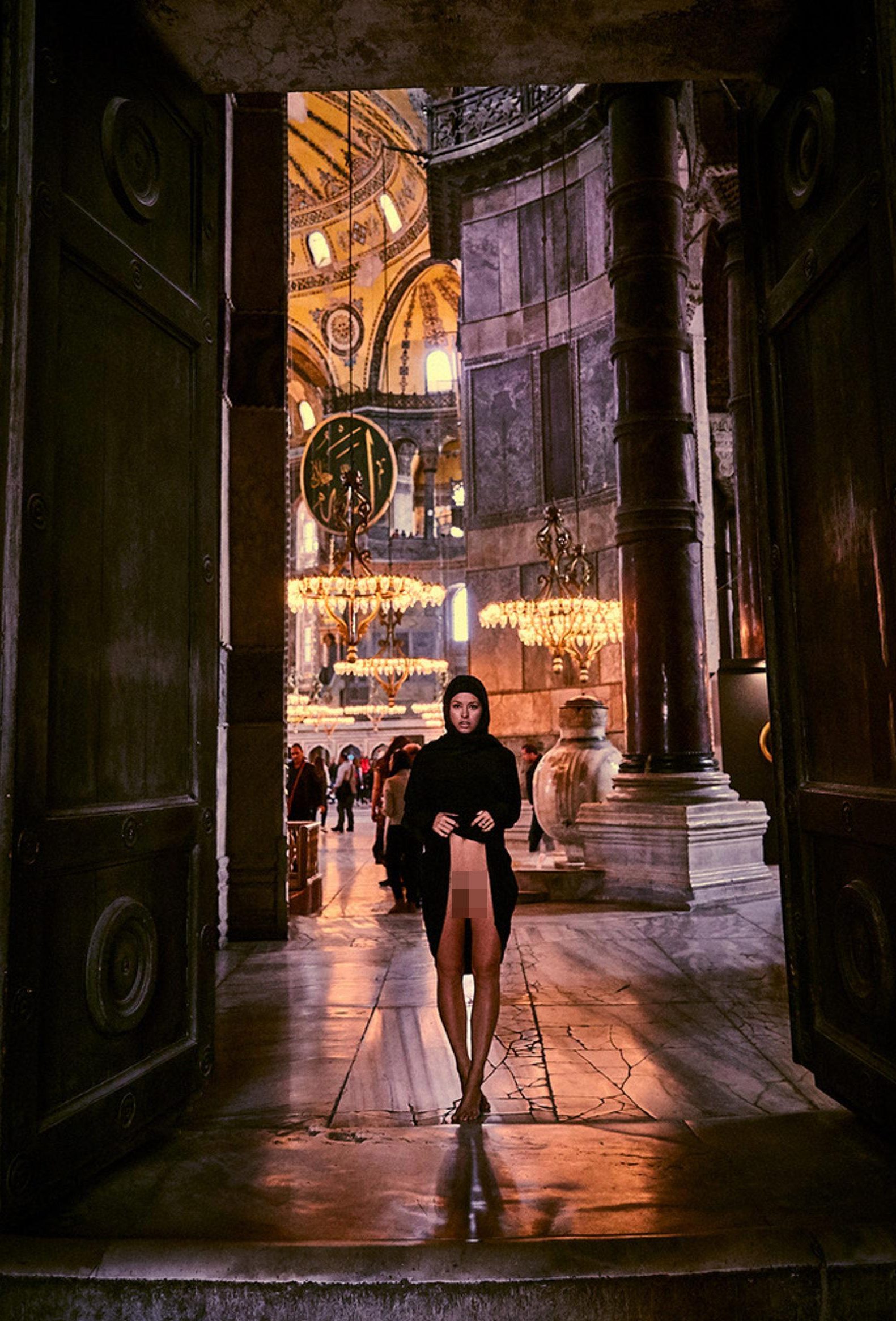 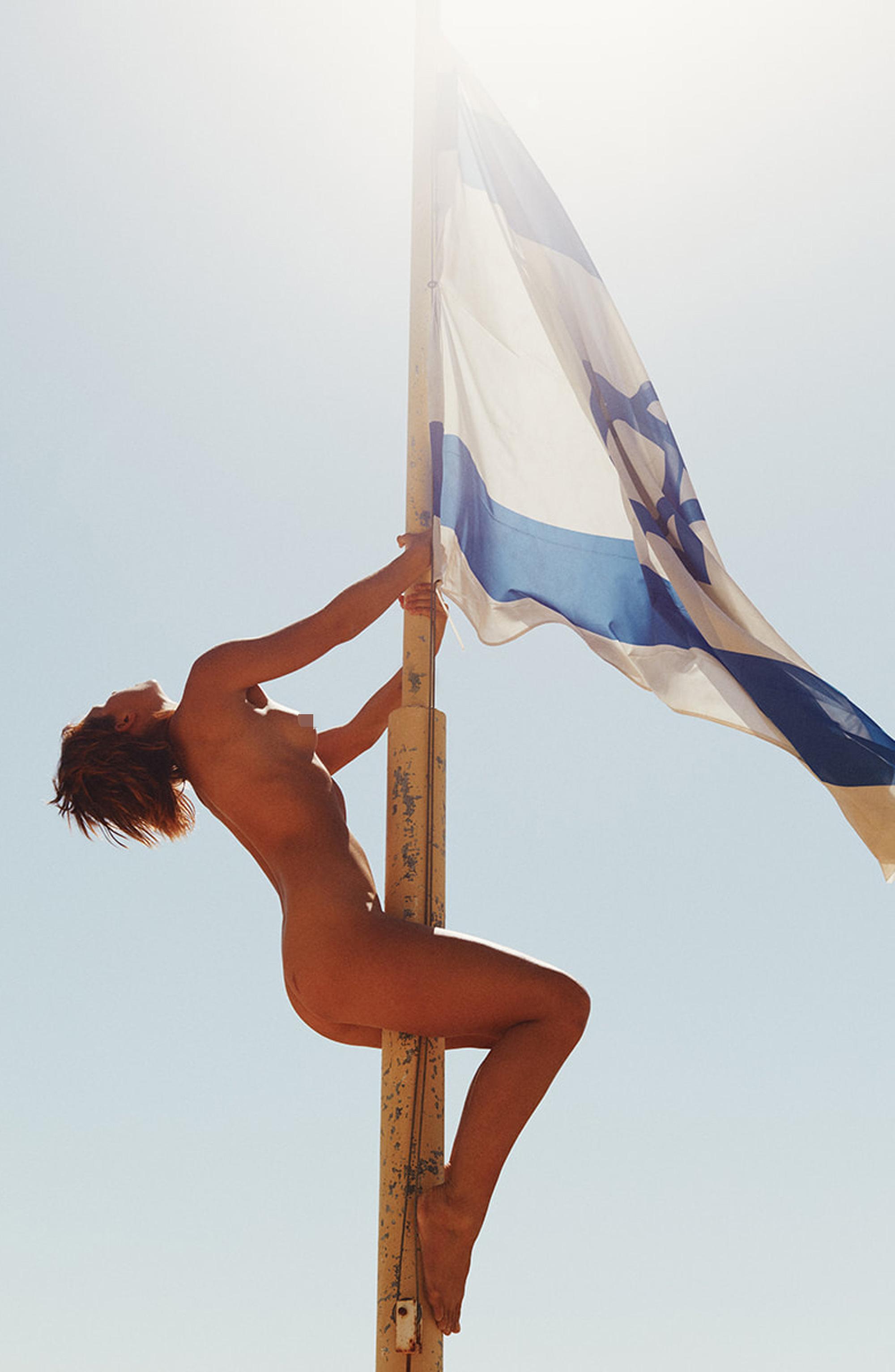 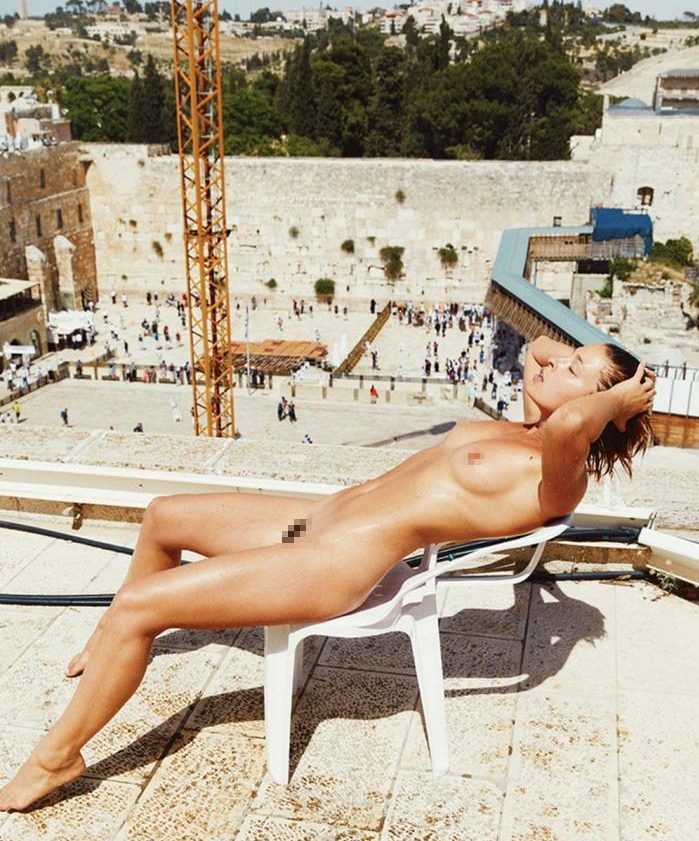 Papen added that she does it because she has a problem with religious institutions itself.

She said: “For me, the biggest problem is with the institutions built around religion. They are driven by money and are soulless.”

Papen explained that while she was at St Peter’s Square the Pope appeared and gave a short speech and traditional Angelus prayer.

She said: “One of the many beggars on the square caught my eye, a barefoot gypsy lady with badly deformed posture."

"Tears were rolling down her cheeks as she was shaking her wet paper cup for some coins.

"I thought to myself, imagine if the Vatican was a place that actually helped people. Imagine if all these huge churches opened their doors for people in need."