The clergy is shut off to Northerners due to their ‘broad northern accents’, a Church of England Bishop claimed last night.

The Bishop of Burnely, the Rt Revd Philip North, said that the priesthood favoured midlde-class and well-spoken candidates over those that came from the working-class.

According to the Bishop, church officials in the dioceses in the North of England that candidates broad accents were looked upon unfavourably by selection advisers, the Telegraph reported. 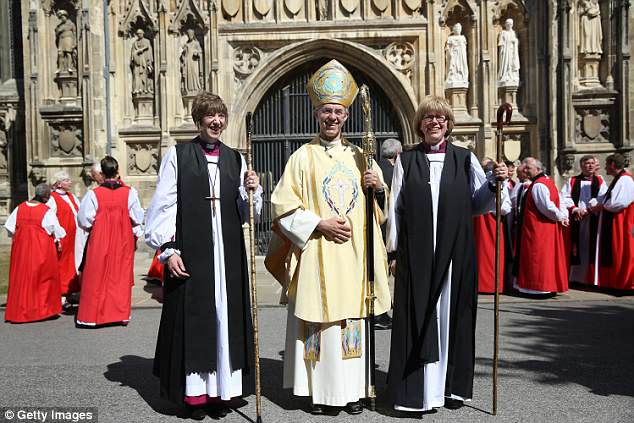 The current leader of the Church of England, the Archbishop of Canterbury Justin Welby

‘They think often there is a sense of discrimination against them,” he told The Daily Telegraph.

‘I couldn’t say whether or not that’s true but I’ve felt it myself at times, and it is a widespread perception amongst the northern directors of ordinands.

The way in which we choose clergy in the Church of England is the same as the way the Army was choosing officers in the Seventies, that’s what it’s based on.

‘So it’s by and for public schoolboys. It rewards eloquence, it rewards confidence, it’s residential, which some people find very intimidating.

There’s no doubt at all that it’s unconsciously biased against a certain demographic.’

He added that he has approved of ‘broad Lancastrians, expecting them to sail through, and either they’ve just scraped by, or they’ve not been recommended. We’ve got pretty much a white, middle-class priestly caste.

‘It does make us nervous sending people from the estates and workingclass backgrounds, and that delivers a narrow priesthood, and that’s a big problem.’

Canon Nick Smeetong, the diocesan director of ordinands for the diocese of Manchester, added to the Church Times: ‘Candidates describe feeling out of place, and being “the only northerner” at BAP [Bishops’ Advisory Panel].

‘There is too often a sense that advisers don’t ‘get’ them.’

The Church of England said that it wanted to see a more diverse pool of candidates from different social backgrounds.