A woman in east China was shocked to find a frozen mouse in her ice lolly while having the dessert.

Ms Yang claimed she had bought the ice lolly from a supermarket and noticed a furry tail sticking out while having the sweets half eaten.

She demanded a £11,300 compensation but was rejected. A market quality supervisor said Ms Yang could only get as much as £113, according to the food safety regulation. 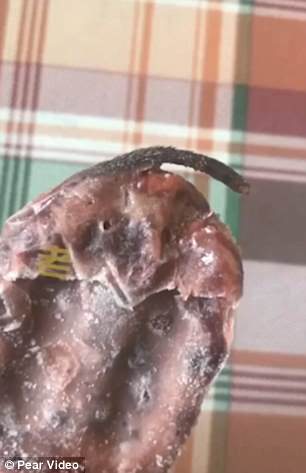 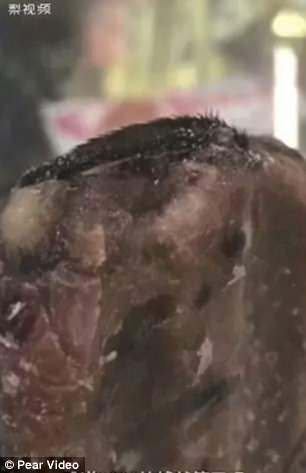 Ms Yang bought a red bean flavoured ice lolly from a local supermarket in east China and found a furry tail stuck out (left). She initially thought the furry tail was a caterpillar (right)

According to Beijing News, Ms Yang bought an ice lolly from a local supermarket in Huai’an, Jiangsu Province on April 24.

‘I took a few bites then I could feel something furry and I thought it might be a small caterpillar,’ Ms Yang said.

She then called her friend and tried to pick it out using a pair of tweezers.

‘It was stuck deep in the ice lolly and later we noticed it was actually a tail of a mouse,’ she continued.

Footage uploaded on Pear Video showed her examining the mouse tail in front of the camera.

The manager of the supermarket suggested to compensate Ms Yang with boxes of ice lollies, then later suggested a compensation of £230. 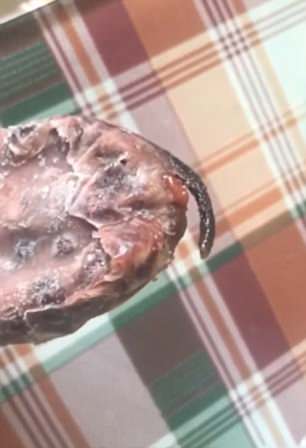 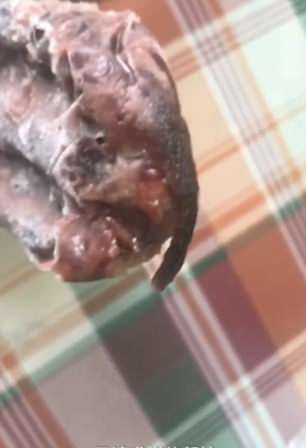 Ms Yang could not pull out the tail as the mouse’s body was stuck in the ice lolly (left). She requested a compensation of £11,300 but was rejected by local officials (right)

‘I just licked the mouse in the tail! It has cast a shadow on me. How can that little money compensate my psychological loss?’ Ms Yang told the Beijing News.

Ms Yang complained to the local market quality supervision after having her request rejected by the supermarket.

The officials inspected the ice lolly and confirmed it was a rodent.

Officer Zhu Conglai explained to Ms Yang that the supermarket is only a medium to sell the ice lollies to customers.

‘The ice lolly manufacturers are set in Shandong Province and it is out of our administrative area,’ said Mr Zhu.

According to the regulation on food safety, the supermarket could only compensate Ms Yang as much as 1,000 yuan (£113).

The supermarket is willing to pay any checkup fees.

Ms Yang did not agree and insisted to seek for more compensation.