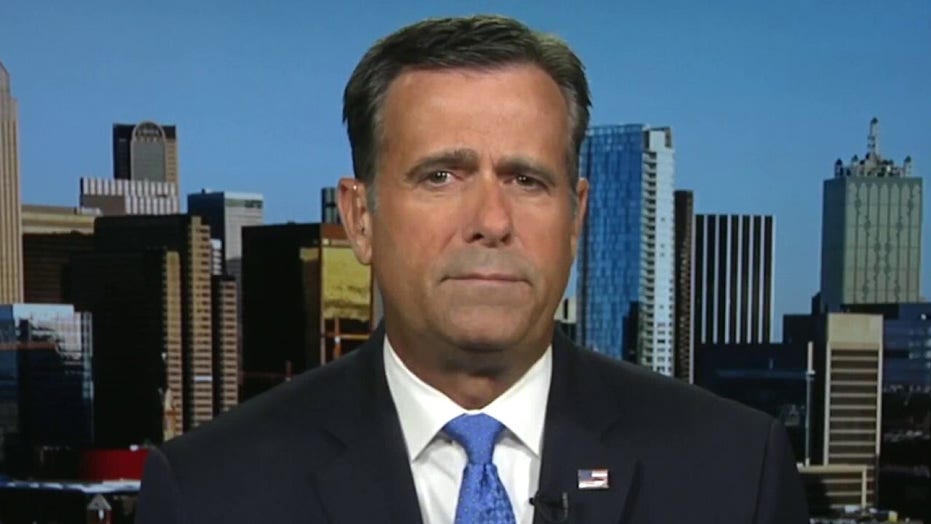 Former Director of National Intelligence John Ratcliffe criticizes the Chinese government for being ‘unlawful,’ arguing there isn’t one country that has done more damage’ to the world economy than China.

A Canadian entrepreneur was sentenced to 11 years in prison Wednesday in a spying case linked to Beijing’s effort to push his country to release an executive of tech giant Huawei, prompting an unusual joint show of support for Canada by the United States and 24 other governments.

China is stepping up pressure as a Canadian judge hears final arguments about whether to send the Huawei executive to the United States to face charges related to possible violations of trade sanctions on Iran. On Tuesday, a court rejected another Canadian’s appeal of his sentence in a drug case that was abruptly increased to death after the executive’s arrest.

Entrepreneur Michael Spavor and a former Canadian diplomat were detained in what critics labeled “hostage politics” after Huawei’s Meng Wanzhou was arrested Dec. 1, 2018, at the Vancouver airport. 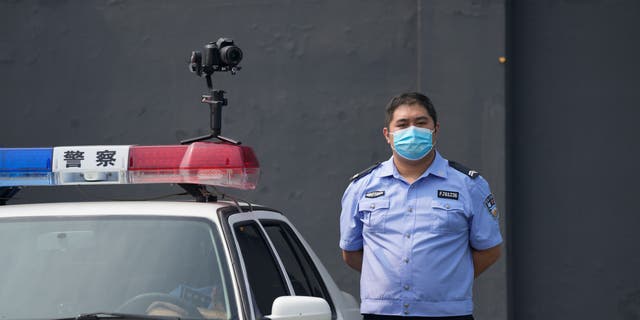 A policeman wearing a face mask stands guard next to a police vehicle with a camera outside a detention center where Dominic Barton, ambassador of Canada to China will meet Canadian Michael Spavor, in Dandong, China, Wednesday, Aug. 11, 2021. A Chinese court has sentenced Michael Spavor to 11 years on spying charges in case linked to Huawei. (AP Photo/Ng Han Guan)

Spavor was sentenced by a court in Dandong, about 210 miles east of Beijing on the North Korean border. The government has released few details other than to accuse Spavor of passing along sensitive information to the former diplomat, Michael Kovrig, beginning in 2017. Both have been held in isolation and have little contact with Canadian diplomats.

The Canadian government condemned Spavor’s sentence. It said he and Kovrig are “detained arbitrarily” and called for their immediate release.

The legal process in Spavor’s case “lacked both fairness and transparency,” said Ambassador Dominic Barton outside a detention center where the sentence was announced.

Canadian Prime Minister Justin Trudeau later said the trial “did not satisfy even the minimum standards required by international law.”

Spavor has two weeks to decide whether to appeal, according to Barton.

“While we disagree with the charges, we realize that this is the next step in the process to bring Michael home, and we will continue to support him through this challenging time,” Spavor’s family said in a statement.

“Michael’s life passion has been to bring different cultures together through tourism and events shared between the Korean peninsula and other countries including China and Canada,” his family said. “This situation has not dampened, but strengthened his passion.”

Diplomats from the United States, Japan, Britain, Australia, Germany and other European countries plus the European Union gathered at the Canadian Embassy in Beijing in a show of support. They also have issued separate appeals for Spavor and Kovrig to receive fair trials or to be released.

“The practice of arbitrarily detaining individuals to exercise leverage over foreign governments is completely unacceptable,” U.S. Secretary of State Antony Blinken said in a statement. “People should never be used as bargaining chips.”

Canadian Foreign Minister Marc Garneau said his country was “moved by the demonstration by solidarity from our international partners.”

Meng, the chief financial officer of Huawei Technologies Ltd. and daughter of the company’s founder, was arrested on U.S. charges of lying to the Hong Kong arm of the British bank HSBC about possible dealings with Iran in violation of trade sanctions.

Meng’s lawyers argue the case is politically motivated and what she is accused of isn’t a crime in Canada.

China’s government has criticized the arrest as part of U.S. efforts to hamper its technology development. Huawei, a maker of network equipment and smartphones, is China’s first global tech brand and is at the center of U.S.-Chinese tension over technology and the security of information systems.

Beijing denies there is a connection between Meng’s case and the arrests of Spavor and Kovrig, but Chinese officials and state media frequently mention the two men in relation to whether or not Meng is allowed to return to China.

Earlier, Barton said he didn’t think it was a coincidence the cases in China were happening while Meng’s case was advancing in Vancouver.

Asked whether Canada was negotiating over possibly sending Meng home in exchange for the release of detained Canadians, Barton said, “there are intensive efforts and discussions. I don’t want to talk in any detail about that. But that will continue.”

Diplomats from the United States and Germany went to the detention center in Dandong but weren’t allowed in, according to Barton.

“Our collective presence and voice send a strong message to China and the Chinese government that the eyes of the world are watching,” the ambassador said.

“A lot of it was around the photo evidence,” the ambassador said. “He obviously had a different view on that.” 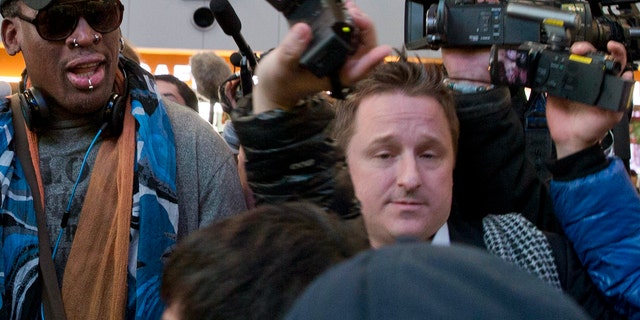 In this Dec. 19, 2013, file photo, Michael Spavor, center, an entrepreneur, is seen with former NBA star Dennis Rodman, left, on the arrival at the capital airport for a flight to North Korea in Beijing, China. The Canadian entrepreneur, who was charged with spying after his government arrested an executive of Chinese tech giant Huawei, faces a possible verdict on Wednesday, Aug. 11, 2021, as Beijing steps up pressure on Canada ahead of a court ruling on whether to hand over the executive to face U.S. criminal charges. (AP Photo/Ng Han Guan, File)

Spavor worked in China but had extensive links with North Korea in tourism and other commercial ventures that brought him into contact with the isolated communist state’s leadership. The Canadian Embassy noted Spavor had been held for 975 days as of Wednesday.

Barton met with Spavor after the sentencing and said he sent three messages: “Thank you for all your support, it means a lot to me. Two, I am in good spirits. And three, I want to get home.”

Kovrig, who also was detained in December 2018, stood trial in March. There has been no word on when a verdict might be announced.

On Tuesday, a Chinese court rejected the appeal of Robert Schellenberg, whose 15-year prison term for drug smuggling was abruptly increased to death in January 2019 following Meng’s arrest. The case was sent to China’s supreme court for a mandatory review before it can be carried out.

Canada and other countries, including Australia and the Philippines, face trade boycotts and other Chinese pressure in disputes with Beijing over human rights, the coronavirus and control of the South China Sea. The United States has warned American travelers face a “heightened risk of arbitrary detention” in China for reasons other than to enforce laws.

China has tried to pressure Canadian Prime Minister Justin Trudeau’s government by imposing restrictions on imports of canola seed oil and other products from Canada.

Meanwhile, Beijing is blocking imports of Australian wheat, wine and other products after its government called for an investigation into the origin of the coronavirus pandemic.