The University of Leicester will stop teaching Geoffrey Chaucer in favour of modules on race and sexuality, according to new proposals.

Management told the English department that courses on canonical works will be dropped for modules that "students expect" as part of plans now under consultation.

Foundational texts like The Canterbury Tales and the Anglo-Saxon epic Beowulf would no longer be taught under proposals to scrap medieval literature. Instead, the English faculty will be refocused to drop centuries of the literary canon and deliver a "decolonised" curriculum devoted to diversity. 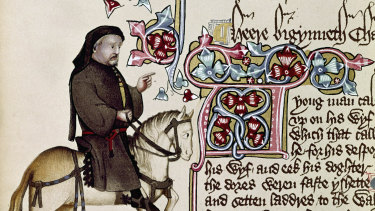 Geoffrey Chaucer as seen in the early 15th-century Ellesmere Manuscript of The Canterbury Tales.Credit:Alamy

Academics now facing redundancy were told via email: "The aim of our proposals [is] to offer a suite of undergraduate degrees that provide modules which students expect of an English degree."

New modules described as "excitingly innovative" would cover: "A chronological literary history, a selection of modules on race, ethnicity, sexuality and diversity, a decolonised curriculum, and new employability modules."

Despite Chaucer's position as "the father of English literature", he will no longer be taught if plans currently under consultation go ahead.

They would end all teaching on texts central to the development of the English language, including the Dark Age epic poem Beowulf, as well as Sir Gawain and the Green Knight.

Sir Thomas Malory's Le Morte D'Arthur, the Viking sagas, and all works written earlier than 1500 would also be removed from the syllabus.

The University of Leicester has said that teaching on William Shakespeare's work will remain in place.

Staff were alerted to the change and the threat of redundancies on Monday, with 60 jobs under threat.

Plans for restructuring at the university were announced in 2020, with management seeking to ensure courses were "sustainable" for the next decade of student intake.

President and vice-chancellor Professor Nishan Canagarajah said that changing modules was part of the long-term strategy to "compete on a global level", adding: "To facilitate this, we may need to cease activity in a limited number of areas."

While teaching on almost 1000 years of the English language and its literature may be subject to cuts, the university has pledged that students will still receive comprehensive education.

A spokesman said: "We are currently considering some proposed changes to our English program and are consulting with staff as part of these discussions. We are committed to the future sustainability of teaching English, and we will continue to work with our staff and our students to deliver this."