Charles Darwin’s notepads STOLEN from Cambridge: University library believes books including Tree of Life sketch that are worth millions of pounds were taken twenty years ago

One of them contains the 19th Century scientist’s Tree of Life sketch, which famously explores the evolutionary relationship between species.

The notebooks have not been found following ‘extensive searches’ over the two decades they have been missing.

‘These notebooks have probably been stolen,’ announced Dr Jessica Gardner, the university’s librarian.

Staff believed that the precious items had been ‘mis-shelved’ within the vast archives late in the year 2000 and the matter was not reported to Cambridgeshire Police until October 20 this year. 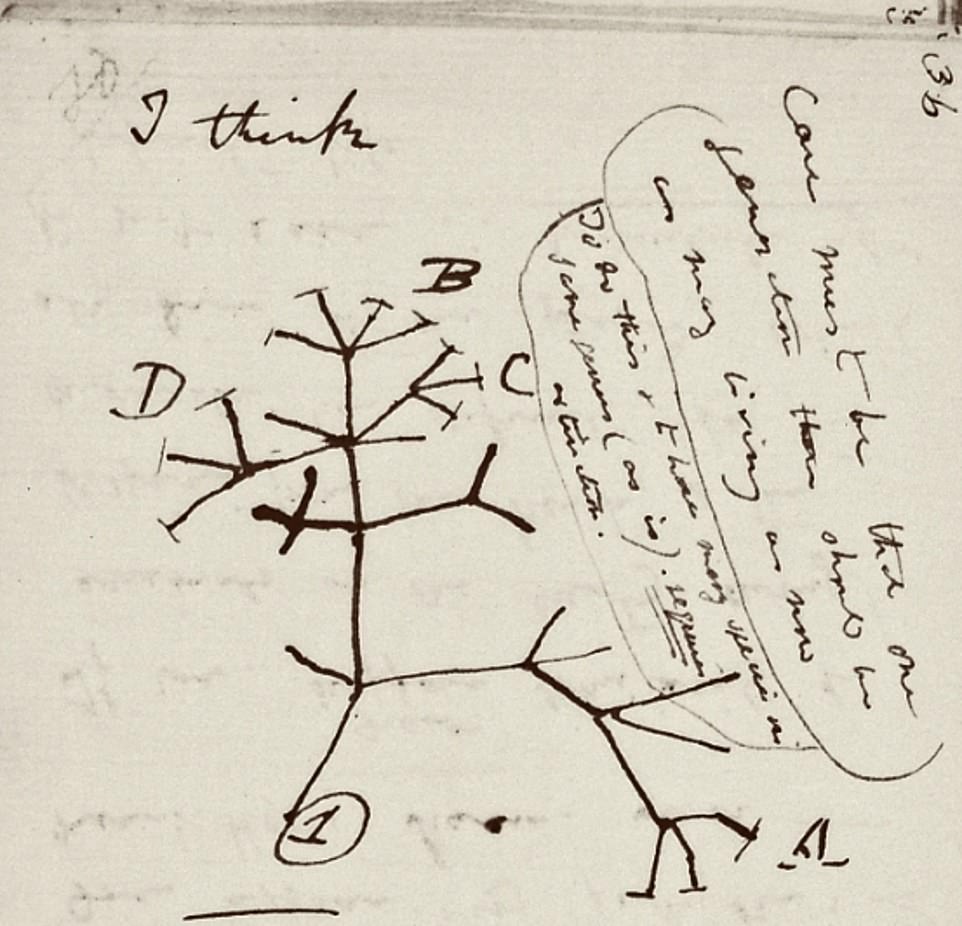 The previous notebooks contain the Tree of Life sketch, which famously explores the evolutionary relationship between species. Cambridge University Library believe the books were stolen 20 years ago 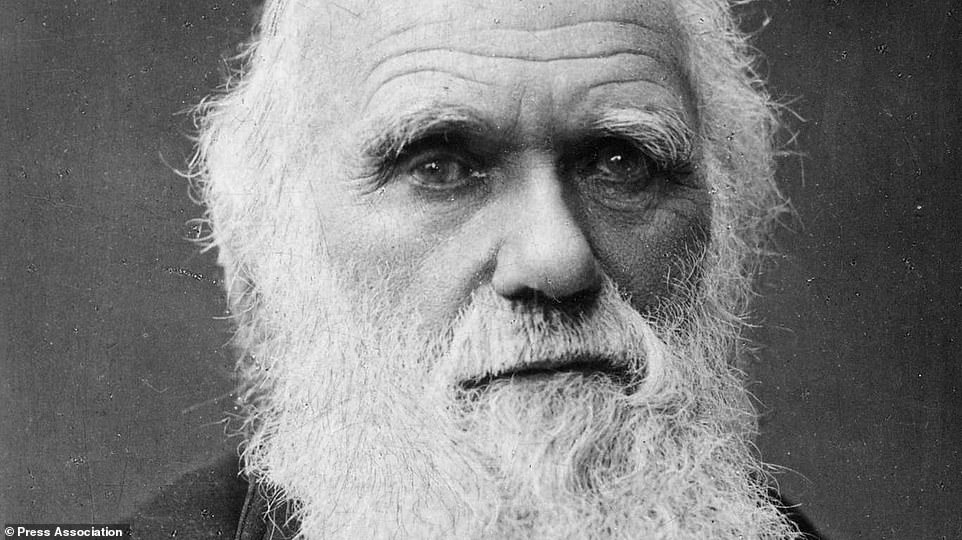 Eminant 19th Century scientist Charles Darwin made jottings in the notebooks, which have not been seen in two decades

Charles Darwin: The British scientist who introduced the idea of natural selection

One of his grandfathers was Erasmus Darwin, a doctor whose book ‘Zoonomia’ had set out a radical and highly controversial idea, that one species could ‘transmute’ into another. Transmutation is what evolution was then known as.

In 1825, Charles Darwin studied at Edinburgh University, one of the best places in Britain to study science.

It attracted free thinkers with radical opinions including, among other things, theories of transmutation.

Darwin trained to be a clergyman in Cambridge in 1827 after abandoning his plans to become a doctor, but continued his passion for biology.

In 1831, Charles’ tutor recommended he go on a voyage around the world on HMS Beagle.

Over the next five years Darwin travelled five continents collecting samples and specimens while investigating the local geology.

In 1835, HMS Beagle made a five-week stop at the Galapágos Islands, 600 miles off the coast of Ecuador.

There, he studied finches, tortoises and mockingbirds although not in enough detail to come to any great conclusions.

But he was beginning to accumulate observations which were fast building up.

On returning home in 1838, Darwin showed his specimens to fellow biologists and began writing up his travels.

It was then that he started to see how ‘transmutation’ happened.

He found that animals more suited to their environment survived longer and have more young.

Evolution occurred by a process he called ‘Natural Selection’ although he struggled with the idea because it contradicted his Christian world view.

In 1858, Darwin published his ideas after recieving a letter from Alfred Russel Wallace

Darwin drew fierce criticism from the Church and some of the press. Many people were shaken by the book’s key implication that human beings descended from apes, although Darwin only hinted at it

In 1859, he published his theory on evolution. It would become one of the most important books ever written.

Darwin drew fierce criticism from the Church and some of the press. Many people were shaken by the book’s key implication that human beings descended from apes, although Darwin only hinted at it.

In 1862, Darwin wrote a warning about close relatives having children, he was already worried about his own marriage, having married his cousin Emma and lost three of their children and nursed others through illness.

Darwin knew that orchids were less healthy when they self-fertilised and worried that inbreeding within his own family may have caused problems.

He worked until his death in 1882 and was buried at Westminster Abbey.

The force said it has launched an investigation into the notebooks’ disappearance and has also notified Interpol.

It is difficult to estimate the value of the notebooks given their unique nature but it would probably run into many millions of pounds, the library said.

‘This is heartbreaking,’ said Dr Gardner.

‘We will leave no stone unturned,’ in trying to discover what has happened, she adds.

The two notebooks, including Darwin’s seminal 1837 Tree of Life sketch, were removed from storage to be photographed at the library’s photographic unit, where the work was recorded as completed in November 2000.

During a subsequent routine check in January 2001 it was found that the small blue box containing the notebooks had not been returned to its proper place.

Dr Jessica Gardner, who became director of library services in 2017, said: ‘My predecessors genuinely believed that what had happened was that these had been mis-shelved or misfiled and they took forward extensive searches over the years in that genuine belief.

‘Now we have completely reviewed as a new team what happened and come to a conclusion that that’s not a sufficient position or set of actions to take.’

The Cambridge University Library is home to more than 10 million maps, manuscripts and other objects, and archivists believed Darwin’s notebooks would turn up.

She said that ‘extensive building work’ was taking place at the library at the time that the items were found to be missing.

There have been continuous searches since the notebooks went missing, she said, and it is now thought ‘likely that theft occurred’.

An appeal for information has been launched on the advice of external experts, including at the Metropolitan Police’s arts and antique specialist crime unit, Dr Gardner said.

She said there are currently no leads on the whereabouts of the notebooks, which are no bigger than a postcard.

The manuscripts were kept in a bespoke blue box, about the size of a paperback.

Dr Mark Purcell, deputy director of Research Collections, said he is confident the manuscripts could not be sold on the open market and it is possible they have ‘gone to ground’.

He said he hoped for a similar outcome to that of London’s Lambeth Palace, where items were stolen after bombing during the Second World War.

‘Forty-plus years later, quite literally as the consequence of a deathbed crisis of conscience, those items came to light and were returned to Lambeth and I think that’s the sort of outcome which we and all institutions of this kind would clearly wish to hope for,’ he said.

Cambridge University Library has more than 210km (130 miles) of shelving and is home to around 10 million books, maps, manuscripts and other objects.

A fingertip search of key areas was carried out early this year, including the whole of the Darwin Archive which comprises 189 archive boxes, but this failed to locate the notebooks.

Dr Gardner said that security policy was different 20 years ago, adding: ‘Today any such significant missing object would be reported as a potential theft immediately and a widespread search begun.’

‘We’ve devoted the whole of our careers to the preservation of cultural heritage and we’re devastated by what has happened.’

The two Darwin notebooks had previously been digitised and their content is available online.

But academics have warned that the scans are no replacement for the real thing.

Jim Secord, emeritus professor of history and philosophy of science at Cambridge University, told the BBC: ‘To have such an iconic object go missing is really a tragedy.’ 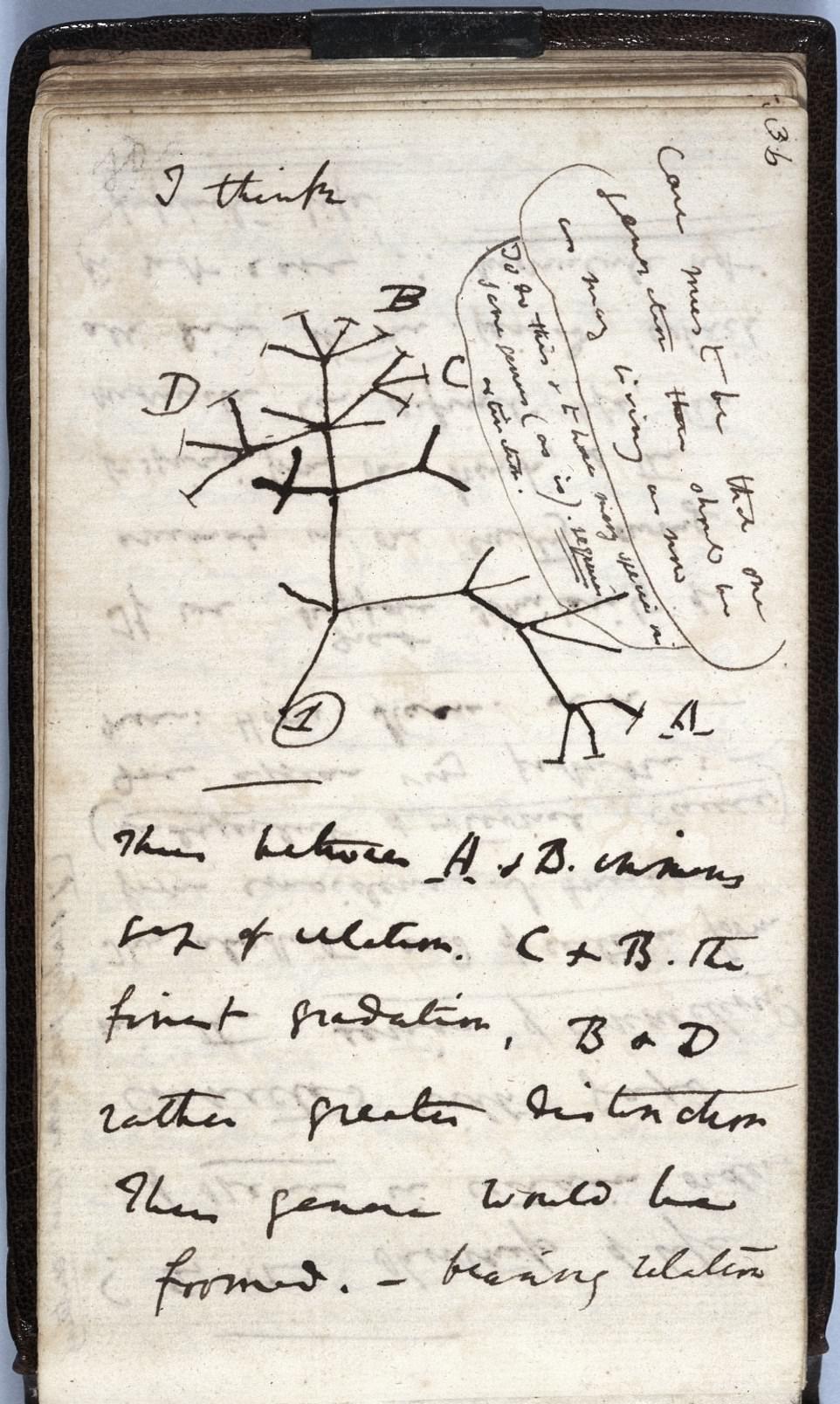 The exact value of the notebooks is unknown but they are said to be worth millions of pounds. There are currently no leads on their whereabouts 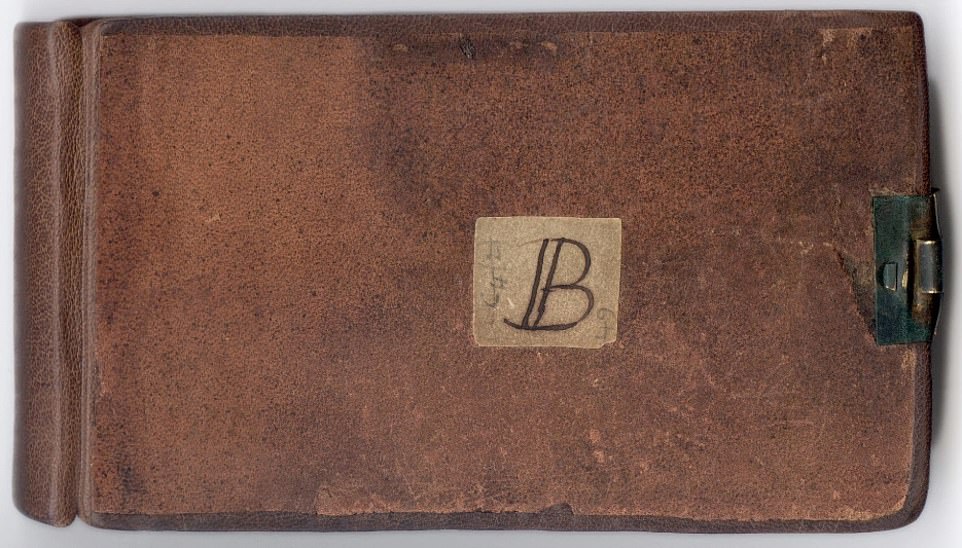 The Cambridge University Library is home to more than 10 million maps, manuscripts and other objects, and archivists originally believed Darwin’s notebooks had been misfiled and  would turn up 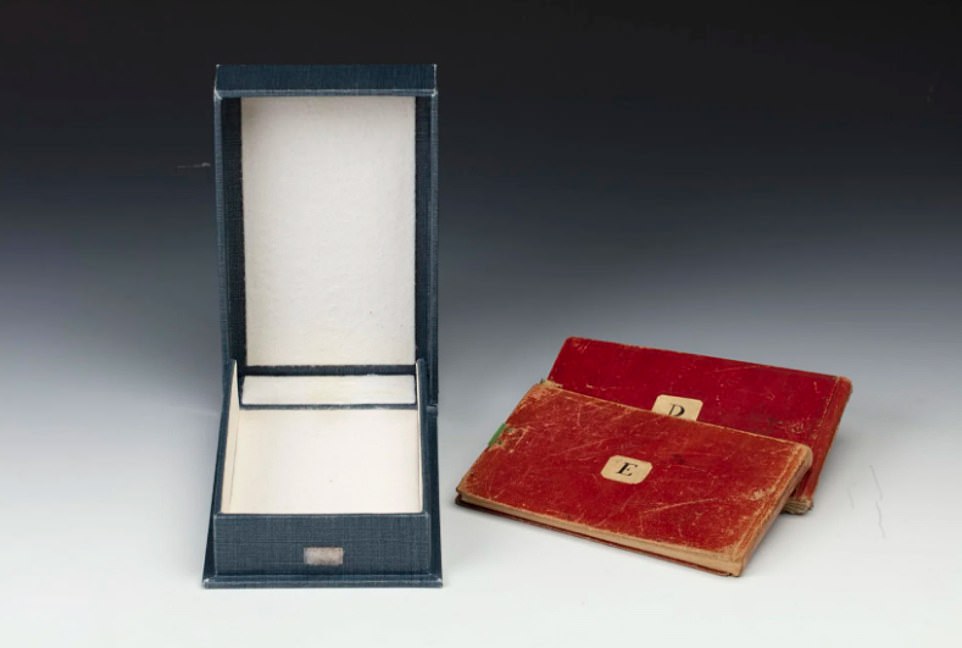 It was part of the 19th century scientist’s thought process as he examined evolutionary relationships.

Darwin made the first Tree of Life sketch in a notebook in 1837.

The illustration was a ‘tree’ depicting branching and extinction through time.

He honed the idea and included the illustration in his 1859 book, On the Origin of Species, which is widely considered to be the foundation of evolutionary biology.

His scientific ideas came to define and inform much of our modern science today.

He explained that reading the notebooks is like being given a window into the scientist’s mind.

He said: ‘It’s almost like being inside Darwin’s head when you’re looking at these notebooks.

‘They’re jottings of all sorts of information that he’s writing down.

‘You have the sense of him working through these ideas at great speed and that kind of intellectual energy which I think the notebooks really convey. ‘

Professor Stephen J Toope, vice-chancellor of the university, said: ‘Cambridge University Library is one of the world’s great libraries and home to globally important collections, assembled and cared for over six centuries, and encompassing thousands of years of human thought and discovery.

‘As a result of this appeal for help, we hope to locate the missing Darwin notebooks and restore them to their rightful place alongside the University Library’s other treasures, making them available to scholars and researchers in the centuries to come.’

He invented ‘origin of species’ and warned that species are dying out: Alfred Russel Wallace is the ‘forgotten father’ of evolution

By Steve Nolan for Mail Online

While his colleague Charles Darwin is revered as one of the greatest British scientists ever to have lived, Alfred Russel Wallace never became a household name.

Many believe the 19th century scientist, who may have even coined the phrase ‘origin of species’ which became the title of Darwin’s earth-shattering theory, could be regarded as the ‘forgotten father’ of evolution.

He also came up with the concept of warning colouration in animals, and the Wallace effect, a hypothesis on how species evolved.

Wallace also did extensive fieldwork, first in the Amazon River basin and then in the Malay Archipelago, where he identified the Wallace Line that divides the Indonesian archipelago into two distinct parts.

The work of Wallace is now finally set to be celebrated, 100 years after his death, in a series of events at the Natural History Museum in London.

A portrait of the scientist is to be unveiled in the museum’s Central Hall close to the famous statue of Darwin by comedian and naturalist Bill Bailey tomorrow, and the museum will put an archive of Wallace’s correspondence online, as well as displaying some of his most important specimens.

The Natural History Museum’s Wallace 100 programme was organised to mark the centenary of his death in 1913 and put the biologist back in the spotlight.

Both Wallace and Darwin shared authorship of the scientific article that first proposed the theory of natural selection in 1858, a year before Darwin’s book On the Origin of Species came out and secured a place in history.

Wallace independently came up with the idea of natural selection and founded the science of evolutionary biogeography – the study of the geographical distribution of plants and animals.

He made a significant impact in fields as diverse as anthropology and epidemiology, and gathered thousands of previously unknown species in South America and Asia.

Natural History Museum curator and Wallace expert Dr George Beccaloni said: ‘This anniversary is a great opportunity to raise awareness of Wallace’s ground-breaking scientific work, his valuable collections which are still being studied today, and his amazing adventures in South America and South East Asia in search of the process responsible for generating the astonishing diversity of life on Earth.

‘Wallace’s remarkable accomplishments are not as appreciated today as they were in his own lifetime, and are often overshadowed by Darwin’s.’

Wallace will also be the subject of a BBC2 series to be screened in the spring and hosted by Bill Bailey, who is patron of the Wallace Fund which is raising money to pay for a life-size sculpture of the scientist.