Can you ssspot the rattlesnake? Arizona reptile expert shares photo of potentially lethal creature hidden beneath rock in garden to warn locals to be careful

A western diamondback rattlesnake – a venomous reptile with a deadly bite – was photographed lurking in an Arizona backyard, but it was camouflaged so well that some studying the image struggled to spot it.

Rattlesnake Solutions – a snake removal and rattlesnake control service based in Phoenix and Tucson – posted a picture on Facebook of a rocky slope and asked followers whether they could find the serpent in the scene.

‘I still don’t see it,’ Phillip Floyd said after examining the image. ‘Somebody show me.’

The spot-the-snake challenge highlights how easy it can be to unknowingly cross paths with the dangerous creature, which some experts say is responsible for the most snake fatalities in the nation. 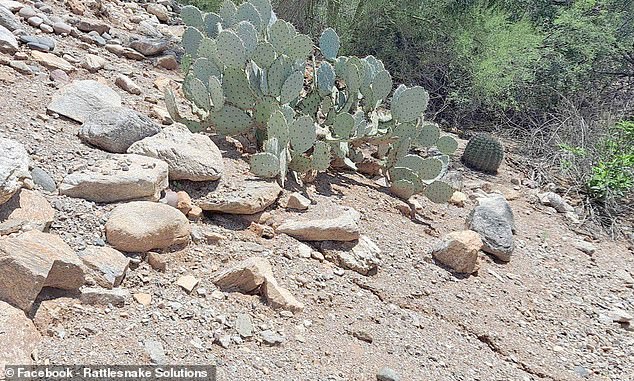 Arizona-based Rattlesnake Solutions  posted a picture on Facebook of a rocky hill and asked followers whether they could spot the serpent in the scene.

‘The Western Diamondback Rattlesnake is notorious for its fatal bite, and has instilled a certain fear and paranoia in humans,’ according the University of Michigan’s School of Zoology.

The species might strike a person if it feels threatened, but generally prefers small mammals, birds, fish and other reptiles, the school said.

‘In a matter of seconds, individuals of this species can leave a fatal bite by injecting venom into its prey.’ 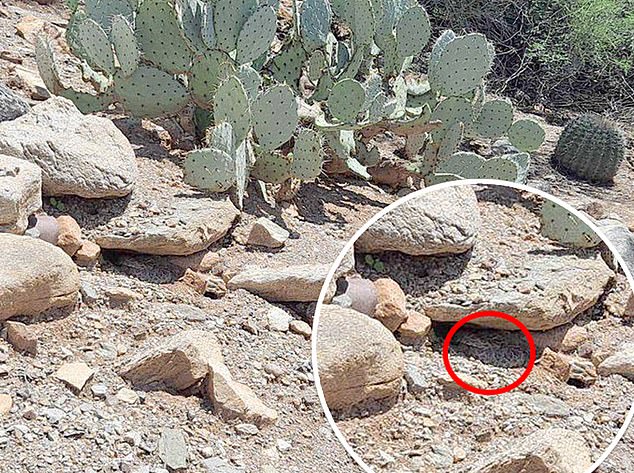 If you look closely, you can see the snake hiding beneath the rock, obscured by a shadow

Some eagle-eyed followers spotted the coiled-up serpent hiding beneath a rock, where a shadow helped obscure its presence.

‘I saw it right away and if I saw it in real life if I had a yard I’d just go about my business,’ Adam Smith commented. ‘These snakes aren’t stalking people. If you’re aware that they’re out there and careful where you walk you can live with them. It’s ridiculous companies relocate these snakes.’

Added Dennis Campbell: ‘Be aware of rattlers. Don’t be afraid. They’re more scared of you. Don’t surprise them and you’ll be ok. I’ve experienced half a dozen encounters and never got bit.’ 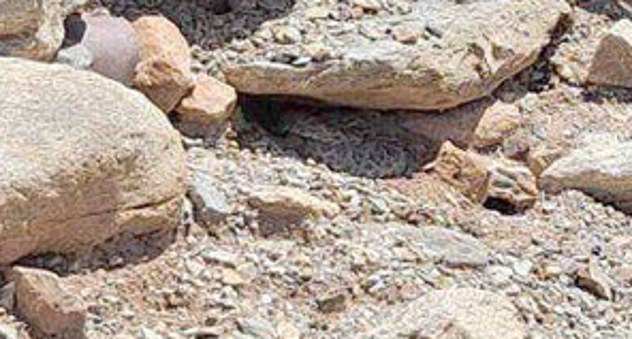 Snake catcher Dave Holland, who posted the picture, said he was called to the scene after the homeowner caught site of the unwelcome visitor.

‘The snake was slightly over 3 feet and coiled under a large rock in front of a rodent burrow,’ Holland told McClatchy News.

‘My customer watched the snake from a safe distance until my arrival, so we knew exactly where it was. The removal was quick and easy, and my only concern was my quarry escaping into the burrow.’

He said the snake was likely hanging out under the rock to keep cool in the heat, and was later relocated to the wilderness.

Some followers came to the defense of the snake, saying they’re usually harmless 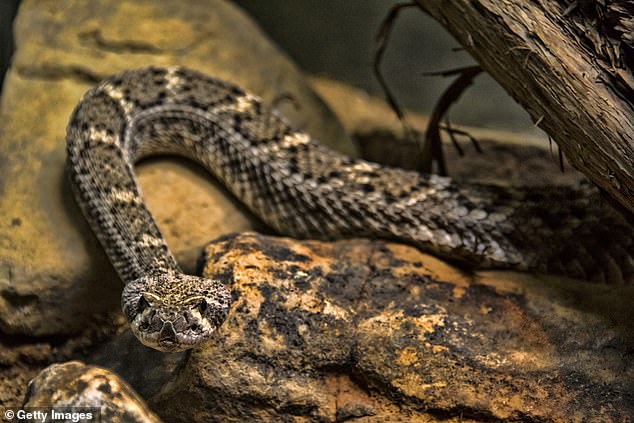 The western diamond rattlesnake bites hundreds of people a year, and is believed to be responsible for the most snake bite deaths in the US

The Arizona-Sonora Desert Museum said the species often coil up in the shade to avoid the heat, and in the winter retreat into cave-like dwellings to hibernate.

It bites hundreds of people a year, according to the Nature Mapping Foundation.

‘The Western Diamondback will coil, rattle fearsomely, and stand its ground when threatened,’ it said. ‘Their rattles are used as a defensive warning sign – “stay away”.’

‘These bites can cause severe bleeding, internally and externally,’ it said. ‘Swelling, bruises, blisters and other skin damage are common.’

If left untreated, a western diamondback rattlesnake bite can be fatal 20 percent of the time.