The amazing video was taken at Martha’s Vineyard – the Massachusetts Island famous for being the location for Steven Spielberg’s classic Jaws.

In the 12-second clip, the man with balls of steel can be seen pulling the sizeable predator by its tail.

He drags it into the water while making sure to steer clear of its mouth.

Instead of running for his life as most people would do, the man then remains in the water for several seconds to apparently ponder his Herculean effort.

Travers Peterson shared the 12-second clip to Facebook, with the caption: “Ya, so this happened yesterday.

“15ft from where we were sitting, this style of fishing separates the men from the boys.”

Onlooker Lee Pasqualucci, who was with the cameraman, said the shark was as tall as the fisherman and was “over 150lbs and 6ft tall”. 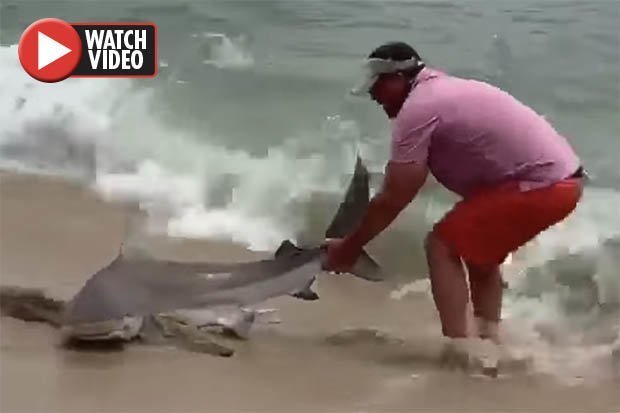 The witness said the man took about 40 minutes to reel in the shark after hooking it.

But when he realised he had accidentally caught the dangerous predator, he cut it loose and the rest is seen in the clip.

The mind-boggling video comes just months after a group of fishermen managed to capture the “world’s most dangerous shark” weighing 400lbs in a river.