‘I remember the flashlight in my face and his harsh whisper’: Golden State Killer’s youngest rape victim who was attacked when she was just THIRTEEN speaks out and reveals her brother worked for suspect Joseph James DeAngelo’s ex-wife

The brother of the youngest known sexual assault victim of the Golden State Killer may have worked for the ex-wife of the man who raped his sister, according to the arrest on Tuesday of Joseph James DeAngelo as the prime suspect in those cases.

Margaret Wardlow, who was just 13 years old when she was raped in 1977, shared that detail and more about her attack by the Golden State Killer, the name attributed to the person thought to be behind 12 murders and as many as 50 rapes, including Wardlow’s, with Inside Edition.

DeAngelo, a 72-year-old former police officer, appeared in Sacramento County Superior for the first time on Friday and was arraigned on two counts of murder, after being arrested on Tuesday on suspicion of being the previously unidentified serial rapist and killer.

Wardlow also spoke to Inside Edition about her feelings on potentially confronting her suspected attacker in an interview airing on Friday. 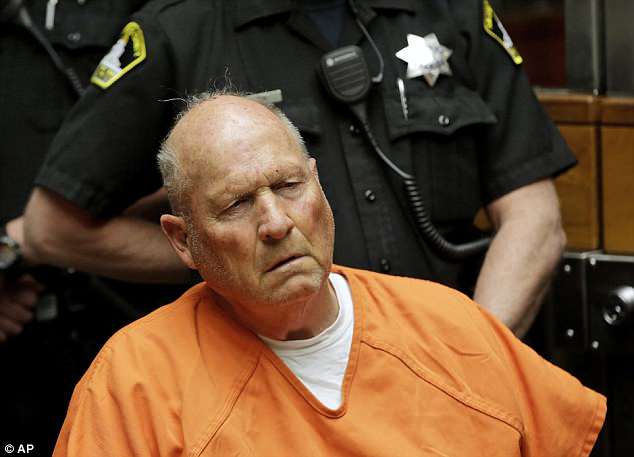 The brother of Margaret Wardlow, the youngest sexual assault victim of the Golden State Killer, may have worked for the ex-wife of the man who raped his sister, according to DNA that led to the arrest of 72-year-old former police officer Joseph James DeAngelo on Tuesday; DeAngelo is seen here at his arraignment in Sacramento County Superior Court on Friday

In a bizarre coincidence, when Wardlow found out that DeAngelo was the man accused of raping her, she discovered that her brother used to work for DeAngelo’s ex-wife, Sharon Huddle.

Her brother has a process serving business in Sacramento and DeAngelo’s former wife, an attorney, was one of his clients.

DeAngelo was identified as the suspected Golden State Killer after DNA from a crimescene was entered into a private DNA database called GEDmatch.

From there, it’s believed a family member match to the Golden State Killer’s DNA was identified. That person had voluntarily submitted his own DNA in hopes of finding unknown relatives. 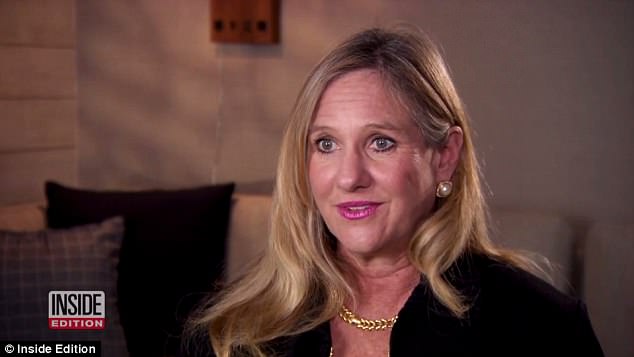 Margaret Warldow (pictured) now looks forward to the potential opportunity to confront the man who attacked her, all those years ago 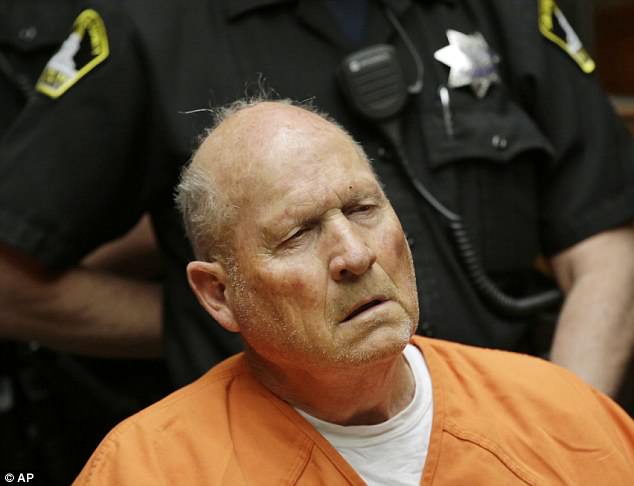 DeAngelo did not enter a plea during his arraignment on Friday, was denied bail and is being held in a psychiatric ward of the county jail, Sheriff Scott Jones

After a likely family match was pinpointed, investigators then used additional information that had obtained over the past four decades to close in on DeAngelo as their suspect.

Warldow now looks forward to the potential opportunity to confront the man who attacked her, all those years ago.

Despite her bravery, the memory of her rape has remained clear in her mind for the past 41 years.

‘I remember being woken up with a flashlight in my face,’ she said. 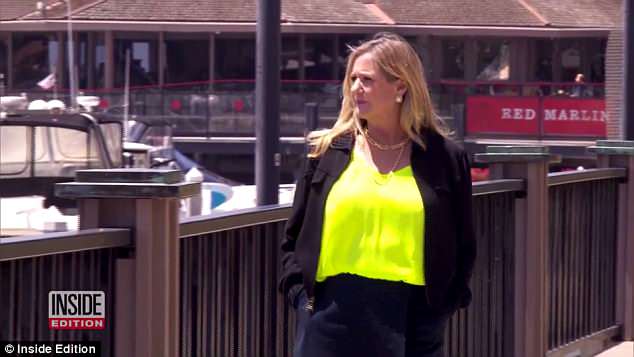 Even during her rapist’s attack on her, Wardlow refused to show any fear, she said.

The arresting officer told Wardlow about the moment DeAngelo was taken into custody.

She said: ‘I spoke to the arresting officer who said, “This guy never saw them coming. He didn’t have a clue. He couldn’t have been more surprised when they put the cuffs on him.”‘ 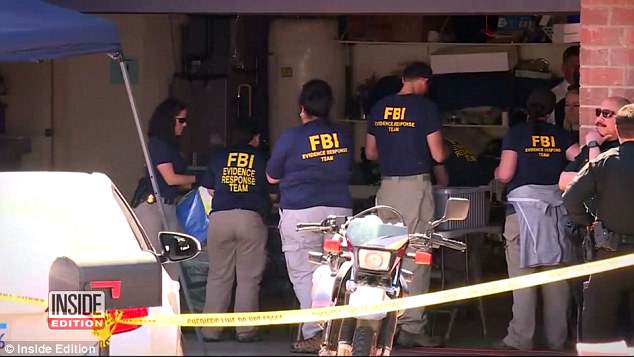 Investigators are now thoroughly searching every inch of DeAngelo’s home, searching for any possible evidence to connect him to the more than 170 crimes he is suspected of committing

DeAngelo did not enter a plea, was denied bail and is being held in a psychiatric ward of the county jail, Sheriff Scott Jones told ABC, where he has been in ‘quiet reflection,’ saying little aside from mumbling.

Investigators are now thoroughly searching every inch of DeAngelo’s home, searching for any possible evidence to connect him to the more than 170 crimes he is suspected of committing, Jones said.

Investigators trying to hunt down the so-called Golden State Killer also used information from genetic websites a year ago and misidentified an elderly Oregon man as a possible suspect, the Associated Press reported.

This time, however, investigator Paul Holes has said he is ‘100 percent sure’ they have the ‘Golden State Killer.’

DeAngelo was found to have been previoulsy engaged to a woman named Bonnie Lee Colwell, according to an engagement announcement that appeared in a local California newspaper. Colwell was described as a lab assistant at Sierra College.

Warldow’s full interview with Inside Edition airs on Friday at 7pm Eastern.

For stations and times in your area, check local listings. 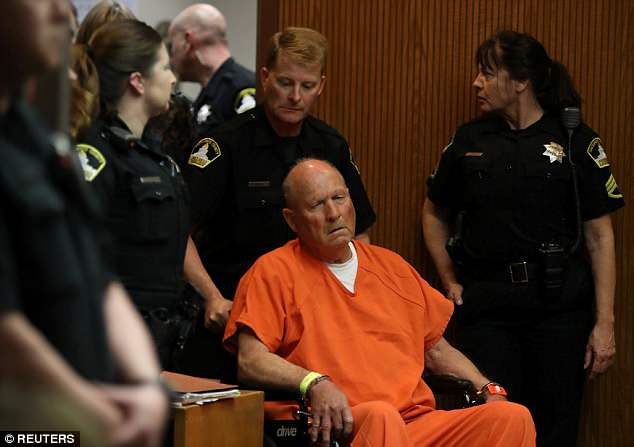 Brian Maggiore, 21, and his wife Katie, 20, were walking their dog in their Rancho Cordova neighborhood, just outside Sacramento, on February 2, 1978.

The FBI said the couple were chased down before being shot and killed by the Golden State Killer. 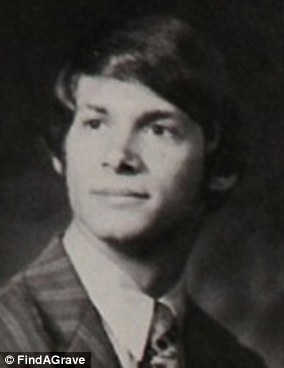 Dr Robert Offerman, 44, and Alexandria Manning, 35, were killed at a home in Goleta near Santa Barbara.

Offerman, an osteopathic surgeon, and Manning, a clinical psychologist, had their hands bound with twine.

Lyman Smith, 43, and his wife Charlene, 33, were bludgeoned to death with a fireplace log in their Ventura County home.

Smith was an attorney who was just days from being appointed a judge. His wife worked as a court clerk.

Patrice Harrington, 28, and her husband Keith, 25, were killed in their home at Dana Point. Police said they were beaten with a blunt instrument.

Patrice was a pediatric nurse and her husband was a medical student at UC Irvine.

Manuela Witthuhn, 28, was raped and beaten to death in her home in Irvine.

She was home alone at the time because her husband was in the hospital recovering from an illness.

Cheri Domingo, 35, and Gregory Sanchez, 27, were house sitting in Goleta when they were murdered in bed.

Domingo was found with her hands tied and suffering massive head injuries. Sanchez was shot and bludgeoned.

Janelle Cruz, 18, was bludgeoned to death in her family’s home in Irvine. She was home alone at the time and police found her lying across her bed.

A real estate agent who was selling the family’s home was the first to discover the teen’s body. Blood was found spattered throughout the home and police believe she was beaten with a pipe wrench.