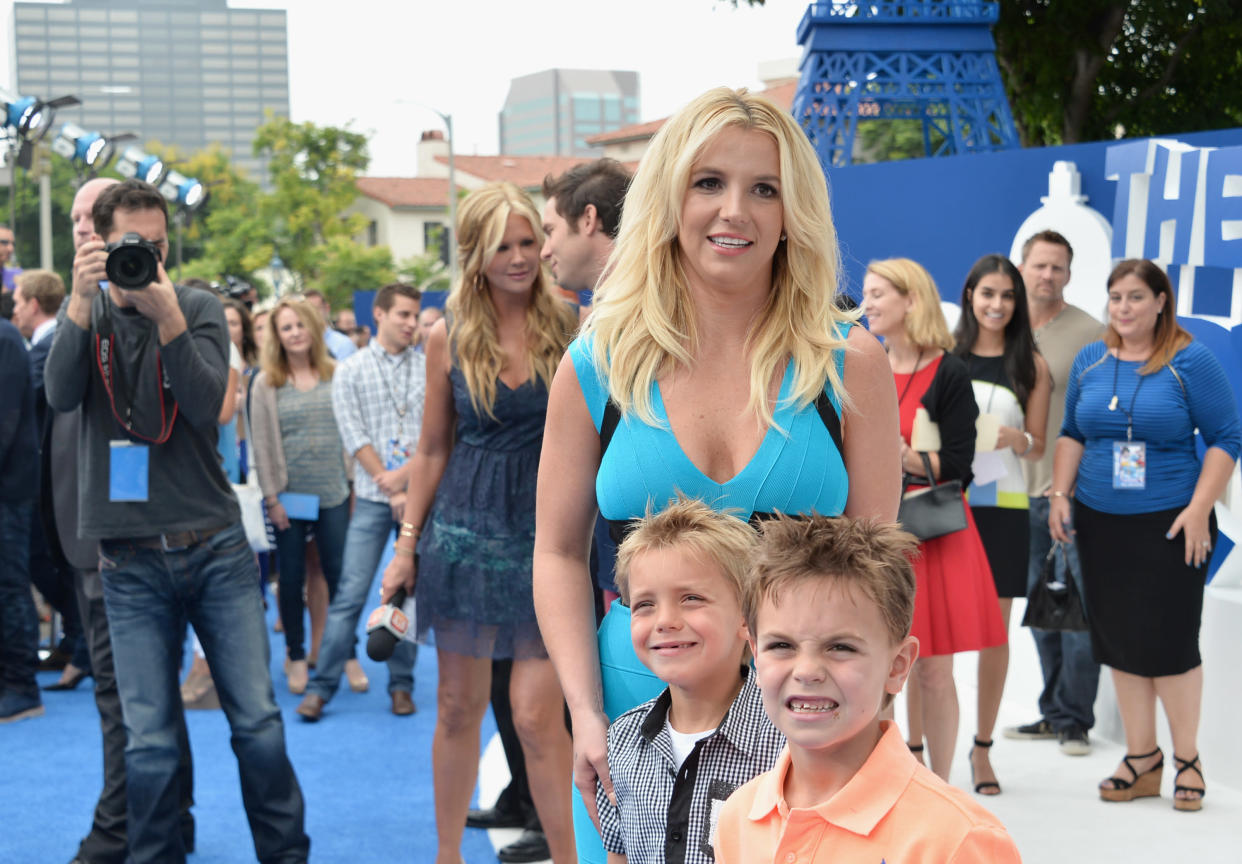 Britney Spears has released a series of audio clips on her Instagram page in which she discusses her estrangement from her two sons, Sean Preston, 16, and Jayden, 15.

In the five-part audio recording, Spears, 40, details everything from her sadness over losing contact with her boys to her troubled relationship with her father, Jamie Spears, saying she “prays he burns in hell.” In an interview with 60 Minutes Australia which aired last week, Jayden defended his grandfather, saying that people don’t “realize how much he cares about her.” The teen and his brother both live with their father, Kevin Federline, who has claimed that his ex-wife’s social media activity embarrasses the boys and keeps them at bay.

In the audio clip, Spears reflects on the pain she’s felt by not having her children with her, saying, it feels like “a huge part of me has died.”

“I used to have my kids, at one point, more than Kevin,” she says.” People don’t remember that part because they always focus on the negative, but when they were 6 to 9 years old, I had them 70% of the time. Since they’ve been gone, I’ve honestly felt like a huge part of me has died. Like literally, I have no purpose anymore. They were my joy, they were my everything … that was what I lived for. And then all of a sudden, they were gone, and I was like, oh my God, did my heart just stop beating? Honestly, I don’t understand how it’s just so easy for them just to cut me off like that. I don’t understand it.”

Spears also addresses her feelings about her father, who placed his daughter under a conservatorship back in 2008 after multiple hospitalizations, and walks back her previous response to Jayden’s statements. (In an Instagram post dated Sept. 2, the singer reacted to her son’s criticism of her racy posts, telling him, “Sorry you feel I do it for attention. I’m sorry for the way you feel. But guess what? I’ve got news for you. I’m a child of God as well we all are in God’s eyes. So NOPE I’m not sorry. I’ve learned to say SO!!!”

In her new audio clip, however, Spears says that comment should have been directed to her father.

“Me saying I’m a child of God is something I shouldn’t have said to you guys,” the pop star clarifies. “That’s something I should have to said to my father. I’ve always been told that the only one who can fix your heart is the one who broke it. Go to the source. But that will never happen, because I pray he burns in hell.”

She also explains that she used to attend AA (Alcoholics Anonymous) meetings under the control of her father, and she was “never able to miss any meetings.”

“The way my dad made it for me, I had to go no matter what,” she says, describing her treatment as cutting “me off from everything I knew … I did feel like they were trying to kill me.”

Her desire to be heard these days comes from the years she was forced to stay silent, says Spears.

“With my kids now, making the claims that ‘she’s not good enough, she wants attention,’ yeah, I do want to be heard, and I’m angry,” she explains. “All I know is my love for my children is more than anything, and I’m sorry if I hurt you guys in any way.”

She ends the recording with a message for her sons.

“Until then, Jayden and Preston, I adore you. I was told you guys have blocked me. I hope you’re using your punching bag I gave you,” she says. “You guys are unbelievable in the gym. Happy early birthday. You guys can do pull ups. Wow. You’re skilled in everything you do. I’m so blessed to even call you mine, and I just want you to know I apologize, my ignorance in saying ‘so’ to you guys — that was meant for my father.”