Lawyers for the British teenager found guilty of lying about being gang-raped in Cyprus have launched an appeal to the country’s Supreme Court to overturn the conviction.

The woman, now 21, was given a four-month suspended sentenced for allegedly making up claims that she was abused up to a dozen Israelis during a vacation in Cyprus in 2019.

A legal team argued at a hearing today that the lower court shouldn’t have admitted the then 19-year-old’s written retraction as evidence because investigators obtained it after she sat in a police station for seven hours without a lawyer or an interpreter. 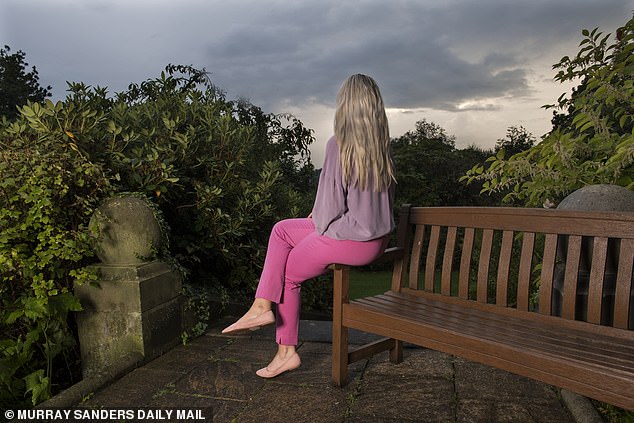 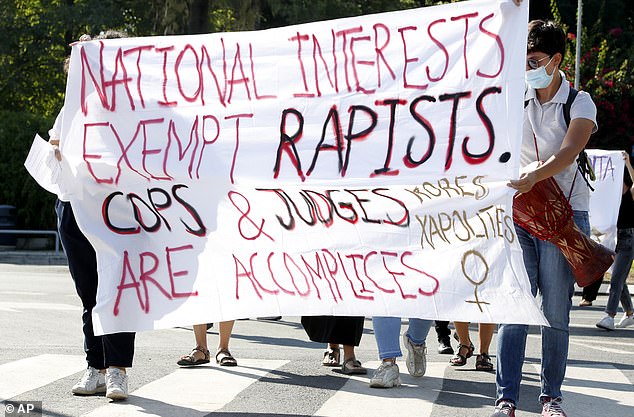 The team headed by British lawyer Lewis Power said that the woman – whose identity hasn’t been formally released – was suffering from a stress disorder and had been pressured into making an ‘unreliable’ retraction.

The team said the ‘discourteous’ lower court judge failed to provide the woman with a ‘fair hearing,’ because he didn’t give defence lawyers the chance to put forward evidence supporting the woman’s claims.

Lewis said in a written statement that the legal team believes that ‘ultimately justice will be achieved’ so that the woman ‘can free herself from the shackles of an unjust conviction which has tarnished her young life.’

Lead prosecutor Adamos Demosthenous told The Associated Press that the state would ‘support the correctness of the original ruling’ and stands by it.

A group of around 30 activists from the Network Fighting Violence Against Women held banners and chanted slogans in support of the woman, including ‘national interests absolve rapists, police and judges are also guilty’ and ‘rapists are to blame for rape, not short blouses and miniskirts.’ 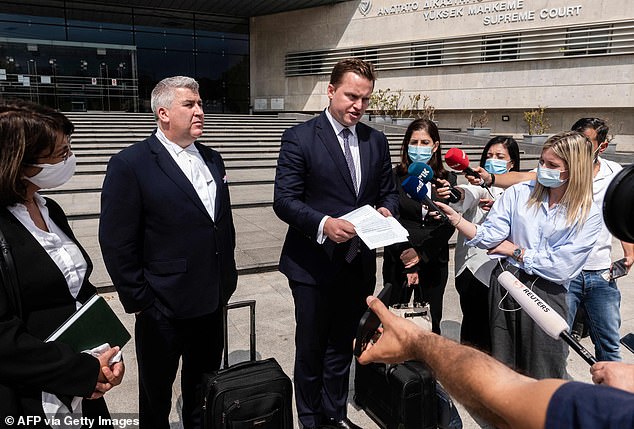 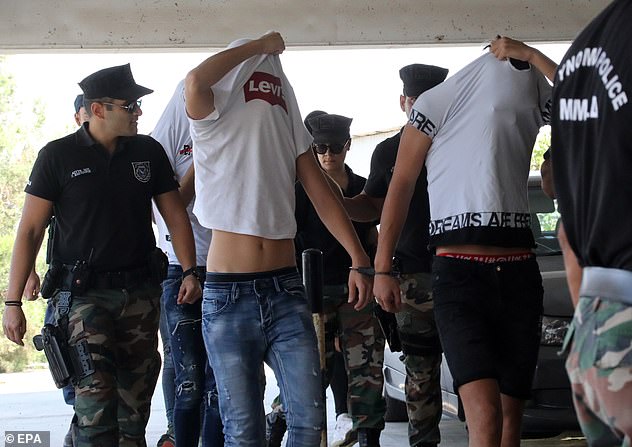 The woman said she was attacked by up to 12 Israeli tourists pictured entering the Famagusta District Court in Paralimni, Cyprus, 26 July 2019

The woman did not attend the two-hour hearing, conducted in Greek in front of a panel of three judges, including the English-born president of the Supreme Court, Persefoni Panayi.

Demosthenous, representing the Cyprus attorney general, said the appeal should not be heard because the woman had criticised the trial judge in an ITV documentary, but the court ruled against the submission and heard the arguments.

Judge Michalis Papathanasiou said in his original ruling that he would give the woman a ‘second chance’ and not send her to jail, because she admitted through her lawyers during mitigation that she made a mistake in making the false rape claim.

Papathanasiou said the defendant didn’t tell the truth and tried to deceive the court with ‘evasive’ statements in her testimony.

He said the woman had admitted to investigators that she made up the claims because she was ‘ashamed’ after finding out that some of the Israelis had videoed her having consensual sex with her Israeli boyfriend on their cellphones.

He had also said her admission was ‘the only time the defendant told the truth.’ 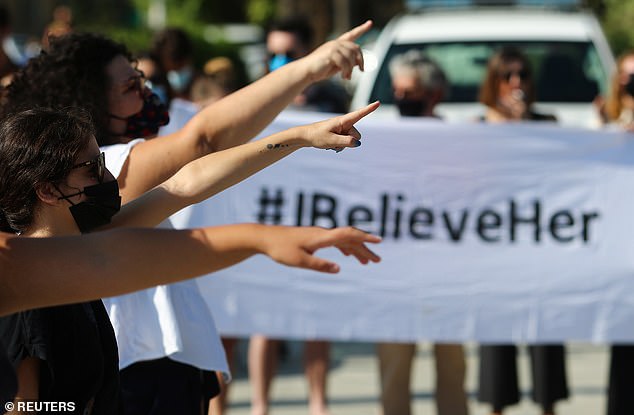 Her Cypriot lawyer Nicoletta Charalambidou, also said the lower court started from the position that there was no rape and had misunderstood the offence of public mischief, which requires a false statement of a make-believe crime.

She said the trial judge, Michalis Papathanasiou, did not allow the defendant to talk about the alleged rape, pointing to the seven times he said: ‘This is not a rape trial.’

He was also said to have ignored defence expert evidence and failed to consider police failures in investigating the rape allegations.

Sentencing her last January, the judge said the evidence showed she had ‘lied’ but added: ‘Her psychological state, her youth, that she has been away from her family, her friends and academic studies this year, this has led me to decide to give her a second chance and suspend the sentence for three years.’

The Supreme Court judges reserved judgment on the appeal.

Speaking after the hearing the woman’s English barrister, Lewis Power QC, said: ‘I think it was a very fruitful hearing where the court asked very poignant questions, considered the legal arguments and identified the points which will ultimately decide this appeal. 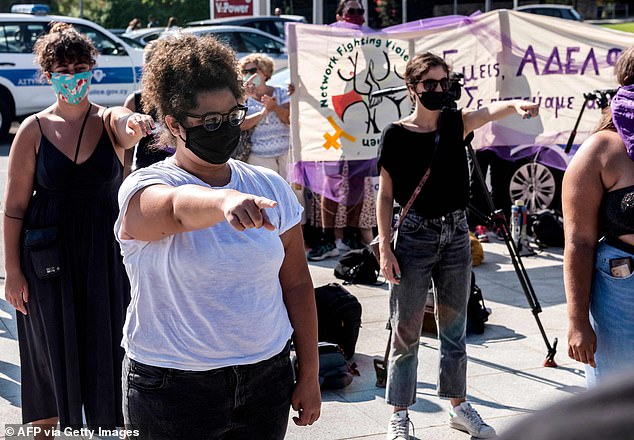 The case has attracted widespread publicity and dozens of protesters gathered outside the court building, banging drums, chanting and clapping their hands

‘We cannot pre-empt the decision of the court, but we were glad to see the court had given much thought and considerable consideration to a very, very difficult case.’

Another member of the legal team, Michael Polak, added: ‘Without wanting to pre-judge the decision of the Supreme Court, we feel we were happy with the way proceedings went today and the way the judges engaged with our arguments.’

If the appeal fails, the lawyers plan to take the case to the European Court of Human Rights (ECHR), which the woman’s lawyers said found against Cyprus after a teenager was taken to a police station in Limassol and separated from his father before confessing to murder without a lawyer present.

Mr Power added: ‘This is the biggest case here in the last decade beyond a shadow of a doubt and the world is watching.

‘It is so important for young women across the world. This case is a beacon.’ 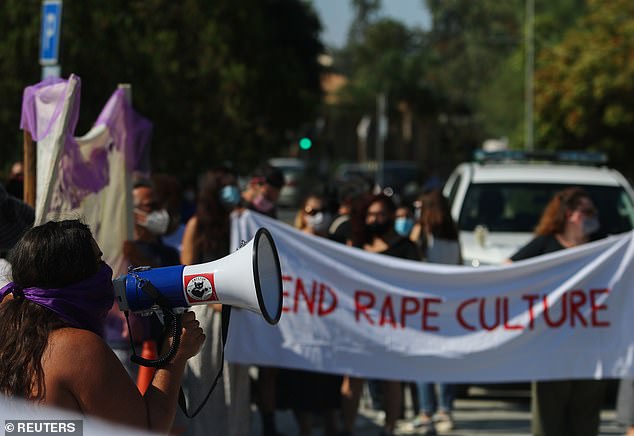 One banner read ‘End rape culture’ and another, ‘I believe her’ outside the courtroom in Cyprus today

He said he had spoken to the woman and her mother, adding: ‘She’s bearing up really well. She is getting on with her life at university.

‘She is very anxious about the result but she is fairly upbeat and determined that this won’t ruin her life.

‘We spoke to her yesterday and her mother. They are back in the UK watching from afar.’

The case has attracted widespread publicity and dozens of protesters gathered outside the court building, banging drums, chanting and clapping their hands.

One banner read ‘End rape culture’ and another, ‘I believe her’.

Christina Kaili, from the Mediterranean Institute of Gender Studies, said: ‘The Cyprus justice system must comply with international conventions and make sure that victims have access to justice, protection and to feel that they are believed.’

All of the Israelis, aged 15-20, were then released and allowed to return home.

The British government said it had raised ‘numerous concerns’ with Cypriot authorities about the judicial process in the case and the woman’s right to a fair trial.