British student, 18, cheats death when friend fights off 10ft CROCODILE that dragged her into a death roll and mauled her leg while white water rafting in Zambia

A teenage British backpacker has been mauled by a crocodile while travelling with friends on a gap year holiday in southern Africa.

The 18-year-old public schoolgirl had been enjoying a day of rafting at Victoria Falls in Zambia when she was attacked by the 10ft reptile which put her into a ‘death roll’.

A male friend ran to help and punched the reptile until it released her, before she was bandaged up and airlifted to hospital so surgeons could try to save her leg. 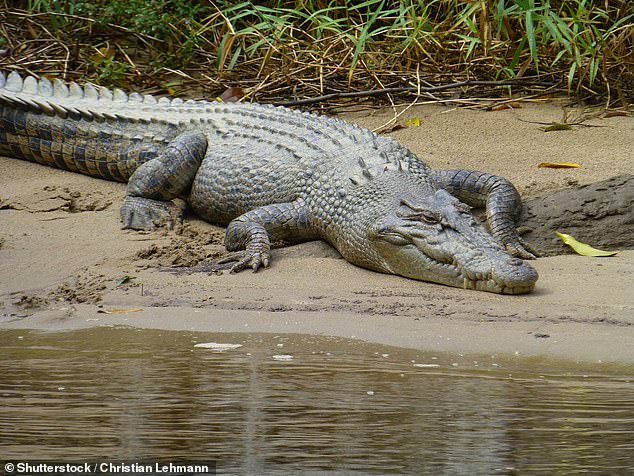 The hospital is located in Lusaka, the Zambian capital, 240 miles from where the attack took place.

It is not clear exactly when the girl was attacked, and her current condition is also unclear.

The girl had been white water rafting in rapids along the Zambezi River below the falls and was taking a break between sessions when the reptile struck.

She and a friend had gone into the river for a swim to cool off, after being told by guides that the water was safe because all the large crocodiles were located upstream, above the falls.

A source told The Sun: ‘They had taken a break from rafting and she was swimming with a friend when it happened.

‘As soon as it happened he dived under the water and started punching the crocodile furiously.

‘Then others jumped in to help. It was chaos. There was blood and people thrashing everywhere. She is lucky to be alive.’

A friend of the family added that it is ‘really quite rare’ to get crocodiles where the attack took place, and the girl was ‘very lucky’ to have been rescued.

While attacks at the falls are rare, they are not unprecedented.

In 2018, a Zimbabwean woman canoeing above the falls with her British fiancé had her arm bitten off by a crocodile which attacked their boat.

Zanele Ndlovu, a former national tennis player, had been enjoying a day out with Briton Jamie Fox when the reptile attacked and punctured their raft in April.

Forced into the water, Ms Ndlovu had her left hand bitten and right arm torn off above the elbow in a horrifying attack just days before their wedding.

She was rushed to hospital where medics managed to stitch up the wound and save her life, before getting married in the hospital chapel the following month.

Zanele told The Chronicle newspaper in Zimbabwe at the time: ‘The waters were very calm and we had guides and there were about seven boats in the water when the crocodile just jumped out.

‘It jumped out of the water and bit a chunk of my right arm together with the side of the canoe which started deflating and it all just happened so fast.

‘The crocodile bit me again and pulled me into the water. My husband was thrown out the opposite side so the boat was between the two of us.

‘Jamie swam over to where I was struggling with the crocodile that was trying to pull me to the bottom of the river and grabbed my waist and with the other hand he rained blows down on the crocodile.

‘It all happened so fast we have conflicting accounts of events. The guides saw us battling the crocodile and joined in and the crocodile finally let go.

‘The pain was excruciating but Jamie was by my side and I summoned the strength to fight through it and although he was in shock he calmed me down.’