A British Falklands War hero was shot dead while protecting his partner during an armed raid on their ranch in South Africa.

Former Royal Navy sailor Julian Stobbs, 59, was shot in the head and chest after four robbers broke into his home near Lanseria as he slept on Friday.

His long-term partner Myrtle Clarke, 53, was left unharmed in the attack after the noise of gunshots alerted neighbours and forced the gang to flee the remote Jazz Farm.

The gang had stolen two phones, two laptops and jewellery from the home, before returning for an unknown reason and Mr Stobbs was shot in ‘a struggle’.

Despite the efforts of paramedics who rushed to the home, which is 30 miles north of Johannesburg, nothing could be done and Mr Stobbs was declared dead. 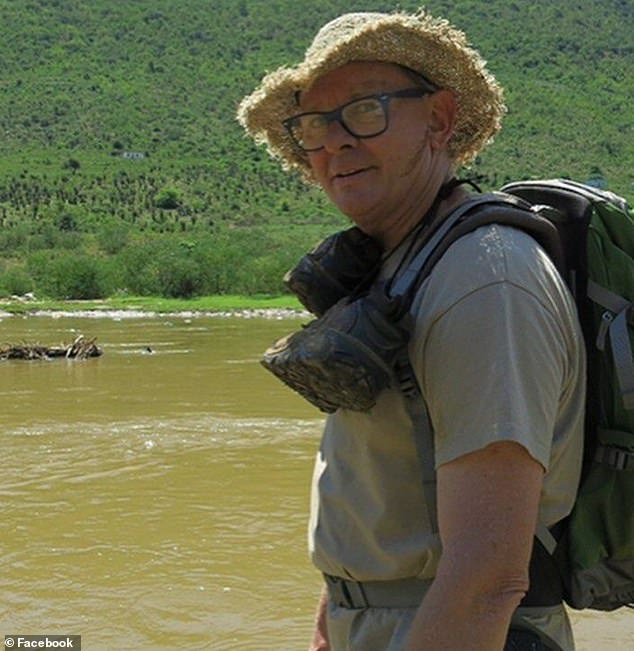 Former Royal Navy sailor Julian Stobbs (pictured), 59, was shot in the head and chest after four armed robbers broke into his home near Lanseria in Johannesburg as he slept on Friday

The hotelier’s son, originally from Keswick, Cumbria, and his partner had lived at the farm – which had been used as a private members and social club – since 1994.

A Neighbourhood Watch response team member said: ‘The gang broke into the farm and stole two phones and two laptops and jewellery and other valuables.

‘They had left the farm leaving the two alive but for some reason they came back again, perhaps for the woman, and there was a struggle and the man was shot.

‘His injuries from the bullets were bad and nothing could be done to save him. The woman was in a very bad state but fortunately had not been hurt’ he said.

Head of Community Safety at AfriForum civil rights group Ian Cameron confirmed Mr Stobbs had been shot dead during a robbery at their farm in Lanseria.

He said: ‘They stole everything in the house and it seems they left and then they came back again and went into the bedroom and shot and killed the husband’.

The attack on Mr Stobbs marked the first of three farm deaths to take place in South Africa this weekend. Afrikaans singer Wynand Breedt, 45, was killed in Worcester on Friday and a pregnant woman, 26, died after an attack in Weenen last night.

Mr Stobbs served two tours of duty in the Falklands in 1982 and 1983, and as the aircraft traffic controller on board HMS Penelope.

He helped launch and retrieve the Lynx helicopter several times a day for sorties against the Argentinian forces, including one in which it destroyed an enemy fast torpedo boat with a Sea Skua missile. 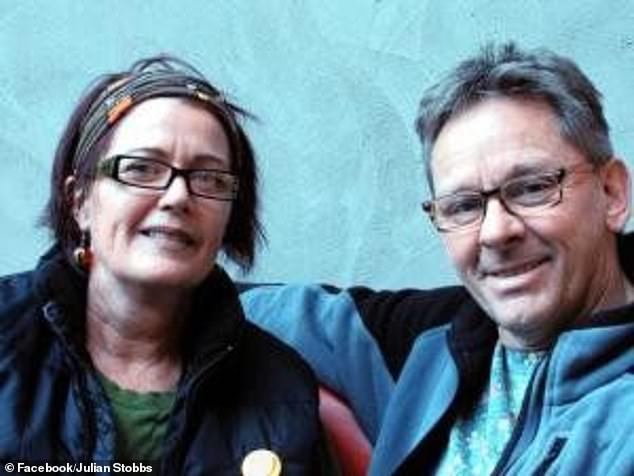 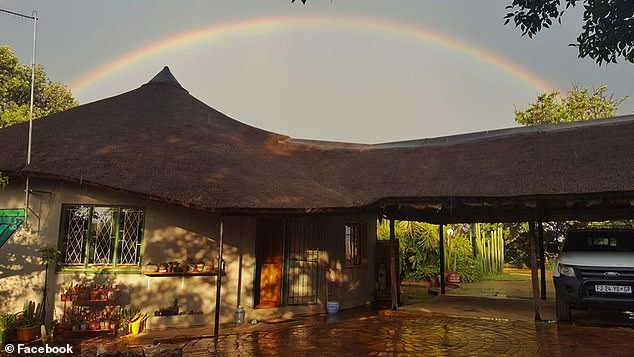 Despite the efforts of paramedics who rushed to the home (pictured: Jazz Farm), which is 30 miles north of Johannesburg, nothing could be done and Mr Stobbs was declared dead

The navy veteran served his country for 12 years before moving to South Africa in 1993 where he fell in love, married a school teacher and bought a farm north of Johannesburg.

A former shipmate who served with Mr Stobbs in the Falklands said: ‘He was the life and soul of the ship off-duty but a total professional when we were at battle stations.

‘He was in control of the Lynx helicopter was launched often several times every day to attack the Argentinian forces and he was responsible for its safety at all times on deck and when in the air.

‘It is a total shock to hear of his murder but no surprise he died bravely’ he said.

Mr Stobbs and Ms Clarke were known internationally as ‘The Dagga Couple’ after winning a five-year battle to make the smoking of cannabis legal in South Africa.

The couple were busted in a police raid at their six-acre farm in 2010, which was run as a private members club and ‘hippy retreat’ where cannabis was openly smoked.

Despite a five-hour search in which Ms Clarke was strip searched three times and Mr Stobbs was held at gunpoint, officers could not find a ‘superweed drug lab’ they claimed existed.

But they did find a quarter pound of cannabis – known as ‘dagga’ in South Africa – and charged them with drug dealing.

But the retired air traffic controller and his partner, who faced a 10-year prison sentence, refused to plead guilty and accept a lenient sentence offered by cops.

Instead they set up a non-profit making organisation called ‘Fields of Green for All’ to fight through the courts to make the personal use of cannabis legal. 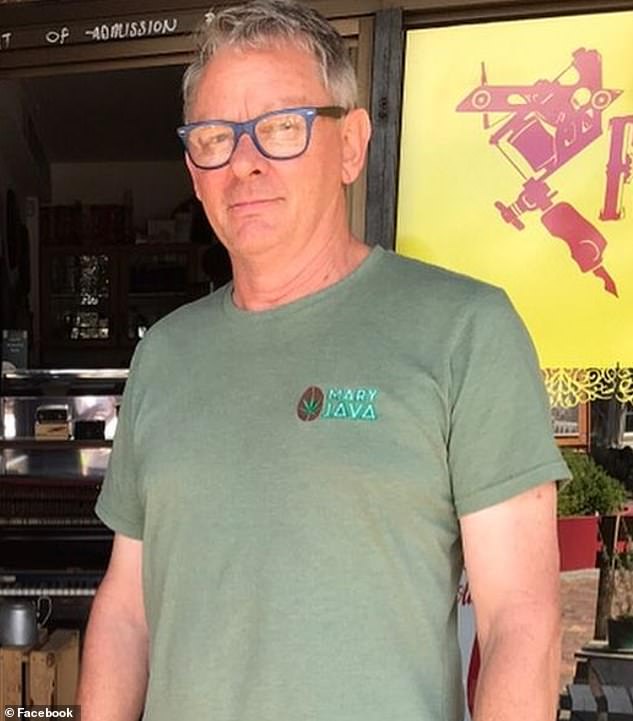 The gang had stolen two phones, two laptops and jewellery from the home, before returning for an unknown reason and Mr Stobbs was shot in ‘a struggle’

The high-profile case was launched in 2013 and ended in 2018 with the law being changed to decriminalise the use, growing and possession of cannabis for personal use.

It was dubbed ‘The Trial of the Plant’ and made the couple household names. Their private club at Jazz Farm became well known for its cannabis bashes.

Mr Stobbs and Ms Clarke’s Facebook page said: ‘During the early hours of Friday, July 3, an armed robbery took place at the property of Jules Stobbs and Myrtle Clarke.

‘The attackers entered the couple’s bedroom and shot and fatally wounded Jules Stobbs. Myrtle was physically left unharmed and the attackers made off with two cell phones and two laptops.

‘The Cannabis community is mourning the passing of our hero. The family is requesting that the public respect their privacy and allow Myrtle some space during this difficult time.

‘Thank you for the outpouring of love we have already received’ it said.

When Mr Stobbs – known as Jules – left the Royal Navy in 1990 he travelled to Tokyo, Japan and played jazz on his guitar outside nightclubs.

He made enough money to fly to South Africa in 1993, where he met and fell in love with Ms Clarke and used his busking money to buy Jazz Farm outright. 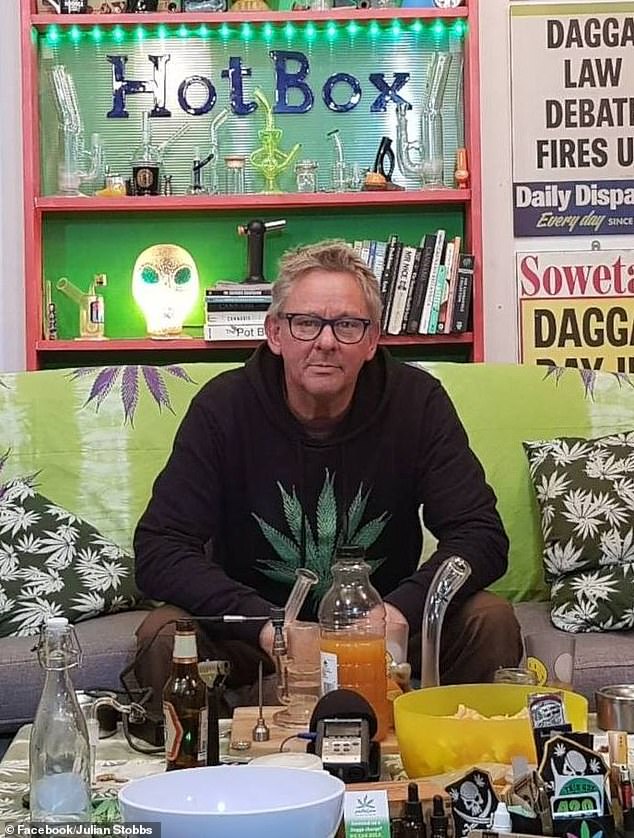 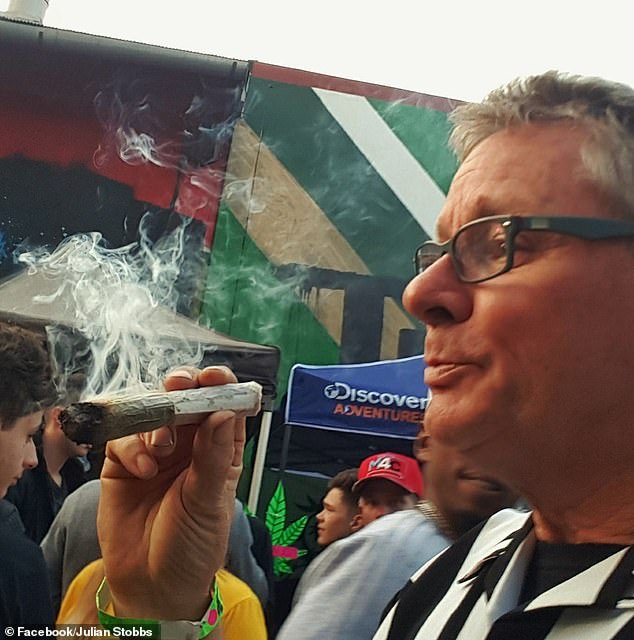 The navy veteran served his country for 12 years before moving to South Africa in 1993 where he fell in love, married a school teacher and bought a farm north of Johannesburg

They turned it into what locals called a ‘hippy commune’, with live music, parties and a ‘sweat lodge’ for large groups to ‘detox in’ at regular events.

The couple also became involved in the South African TV and film industry, working on the local version of Big Brother and on the Hollywood film Hotel Rwanda.

Both became art directors known as a ‘greensman’ which was providing foliage both real and artificial such as plants, trees, flowers and vines for film sets.

Then came their arrest in 2010 and their subsequent campaign to legalise personal ‘dagga’ use which went global with funds pouring in from around the world.

In 2017, the Western Cape High Court in Cape Town ruled that prohibiting the use and possession of cannabis in private was against the nation’s constitution.

The State appealed, but in 2018 Mr Stobbs – who had been arrested eight years earlier as a drug dealer – won his case when the Constitutional Court upheld the ruling.

Neither he or Ms Clarke were ever convicted after arguing their arrests were illegal.

After the court battle, the smoking of cannabis for personal use was made fully legal in South Africa.

Fellow activist Gareth Prince said: ‘The murder of Julian is a huge loss to us all and I understand Myrtle is distraught and wants time alone to mourn his death.

‘He will be remembered by so many people and is now a legend.’

The couple believed the use of cannabis and cannabis oil had a medicinal effect on users and that it should be legal to cultivate it and use it.

Ms Clarke said after the drugs raid on their home in 2010: ‘We had a very heavy handed visit from the South African police acting on a tip off searching for a “drug lab”.

‘What they found was a quiet middle aged couple in their pyjamas with some “dagga” and we were arrested after a five-hour ordeal in our kitchen.’

Mr Stobbs added: ‘I found myself with a revolver in my cheek and the more we thought about it the more we realised it was a gross invasion of our privacy.

‘We were so indignant at our treatment at the hand of the police that we then sued seven government departments on charges of enacting unlawful laws.

South African cannabis activist and businessman Tony Budden said: ‘This really is a tragedy for the cannabis culture in South Africa and is desperately sad.

‘Jules worked tirelessly to bring awareness about the plant and its potential to the fore in order to create an open industry that benefitted all South Africans.

‘We will use Jules’ passing to inspire us and to work even harder to see that his dreams don’t die and that his work on cannabis will continue through Myrtle.

‘We will pick up his sword and make sure South Africa sees the ‘fields of green for all’ that he envisioned and as a community we will work towards that’.

South African Police were unavailable to comment on the death.

South Africa suffers some 21,000 murders a year – which averages out at 58 a day – but activists claim the authorities turn a blind eye to attacks on white farmers.

The latest figures on farm attacks in the country from the South African Police Service state in 2017 there were 357 carried out with 74 farmers murdered.

Civil rights group AfriForum claim last year there were 552 farm attacks and 57 murders and say that the violence carried out is so violent it is unreportable.

Mr Cameron of Africa Forum added: ‘The figures for this year show 156 farm attacks so far and 23 murders but during the Covid-19 lockdown the attacks stopped.

‘Since we have gone down to Level 3 and with the reopening of the country it has become like open season on the farmers again and the attacks are flooding in’ he said.

The attack on Mr Stobbs marked the first of three farm deaths to take place in South Africa this weekend.

On Friday night in Worcester, Western Province, Afrikaans singer Wynand Breedt, 45, was shot dead when he arrived back at his farm at 10.30pm as he parked his car.

His body was found beside the vehicle with gunshot wound to the chest and he was pronounced dead.

At another small holding 250 miles away in Weenen, KwaZulu-Natal province, a gang of three men armed with knives and balaclavas broke into remote Ayors Farm last night.

Two of the men attacked the husband while the third dragged his heavily pregnant wife, 26, into a bathroom and slit her throat, killing her and the unborn baby.

The husband was rushed to hospital for treatment to serious knife wounds but their two children, aged four and eight, were unharmed in the attack.

Chris Pappas, the Democratic Alliance spokesperson on Agriculture and Rural Development for KZN province, said: ‘We are shocked and appalled at these brutal murders.

‘Why does the President of the country remain silent and continue to deny farm murders are happening.

‘And why have these attacks and murders not been classified as hate crimes” he said.