Now comes the big thaw: Temperatures are set to hit double digits this week with 12C expected across the south – after record lows saw the sea start to freeze and the Thames ice over for the first time in 60 years

Temperatures will hit double digits this week as milder conditions take over after a week of record-breaking cold, the Met Office has revealed.

Wintry weather will still be around for the weekend, but temperatures will begin to rise as high as 12C across the south of England next week, forecasters have predicted.

It comes after seagulls perched on the surface of the River Thames at Teddington, south west London, on Friday when it iced over for the first time since Britain’s Big Freeze in 1963. And even the waves on Aldingham beach in Cumbria ground to a halt as the mercury plummeted.

Yellow weather warnings for snow and ice are in place across most of Scotland and parts of northern England and Wales on Saturday, and again on Sunday, as well as eastern parts of Northern Ireland.

But the mercury with rise to a comparatively balmy 12C next week as the big thaw takes over the UK.

Chief meteorologist at the Met Office, Neil Armstrong, said: ‘For the past week the UK has been in a very cold airmass with temperatures well below average, this will change through the weekend as milder air moves in from the Atlantic and pushes that cold airmass out into the North Sea.

‘Where temperatures were close to freezing in many places last week, we could expect to see 11C or 12C next week. There are still some wintry hazards to get through over the next few days, with low temperatures, strong winds and further snow especially in Northern Ireland.’ 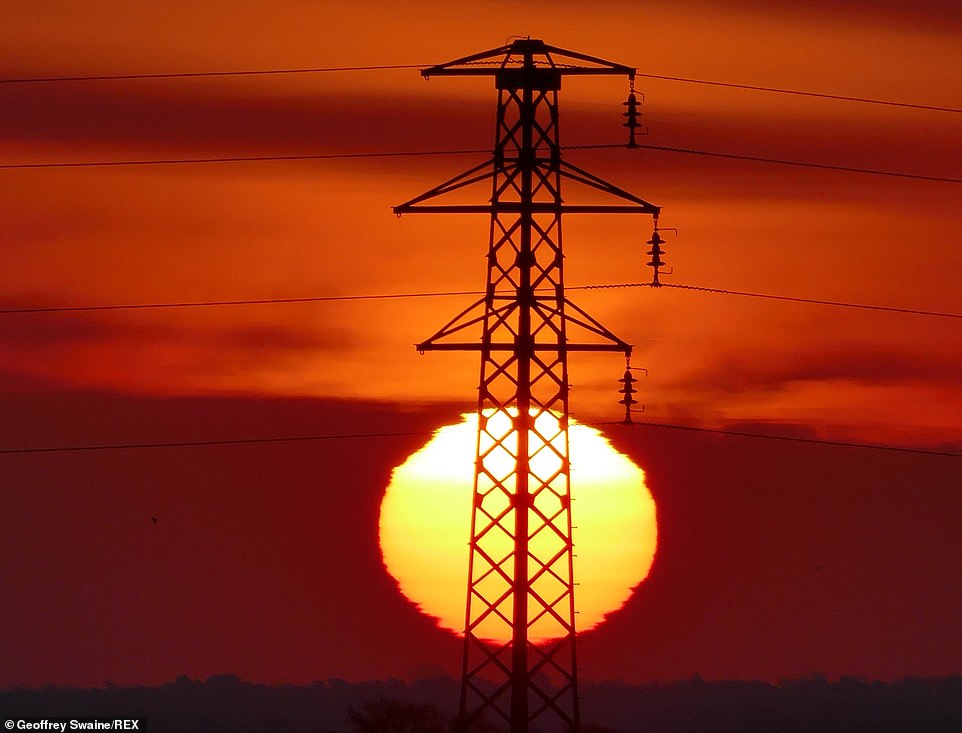 Wintry weather will still be around for the weekend, but temperatures will begin to rise towards double figures into next week, forecasters have predicted. Pictured, the sunrise in Playhatch, Oxfordshire 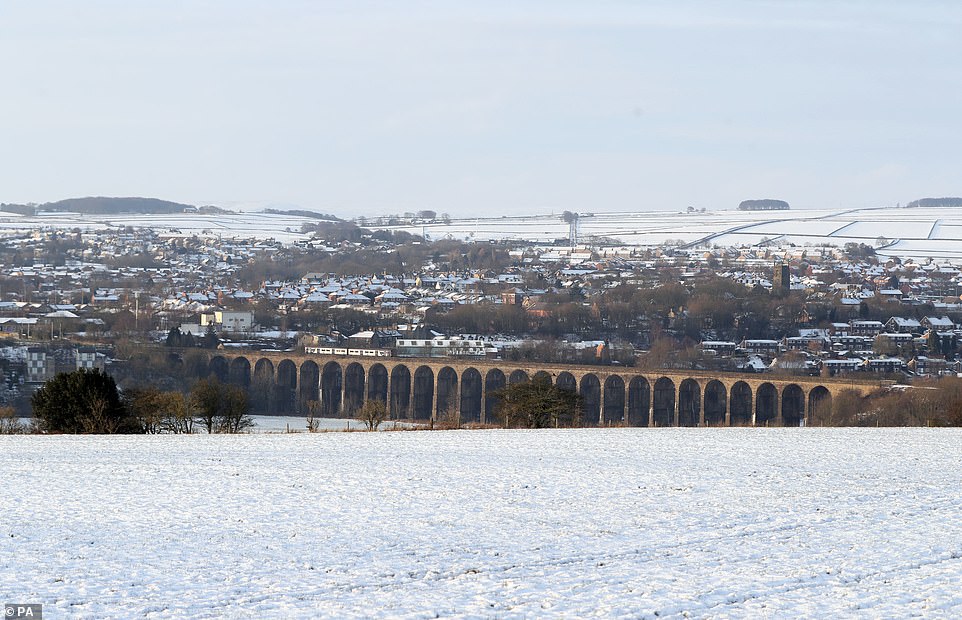 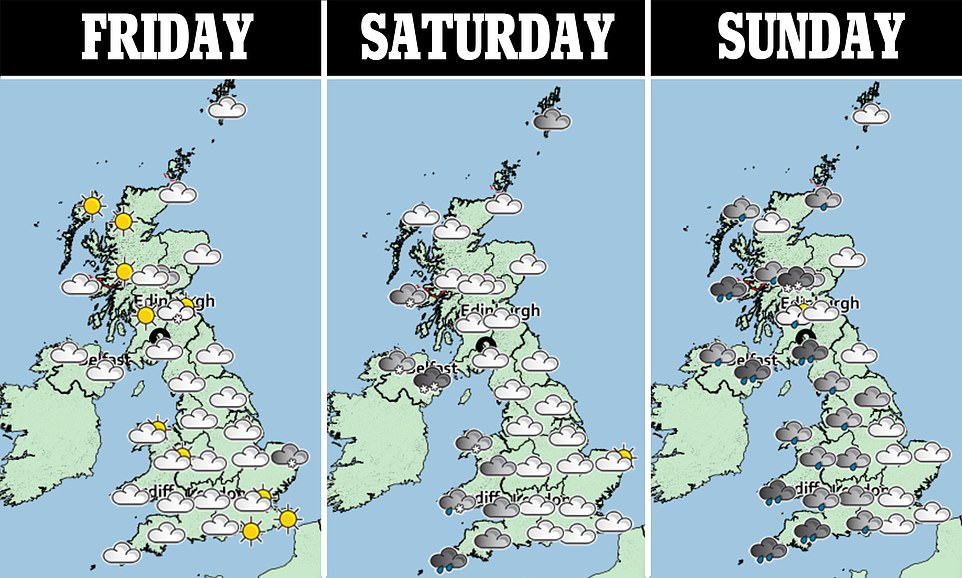 He added: ‘On Sunday there is a risk of freezing rain over the high ground in Scotland and northern England, with further snow in the Scottish hills, before turning to rain as the warm air takes hold.’

Early on Saturday a band of precipitation will move in from the west, according to the Met Office. They said this would fall as snow in Northern Ireland which can expect up to 20cm in western and southern regions.

Earlier this week, the coldest UK temperature for 65 years was recorded at Braemar in Aberdeenshire on, when the mercury dropped down to minus 23C on Wednesday night.

A record low temperature for February was also recorded in England and Wales when temperatures in Ravensworth, North Yorkshire, dropped to minus 15.3C overnight on Thursday. 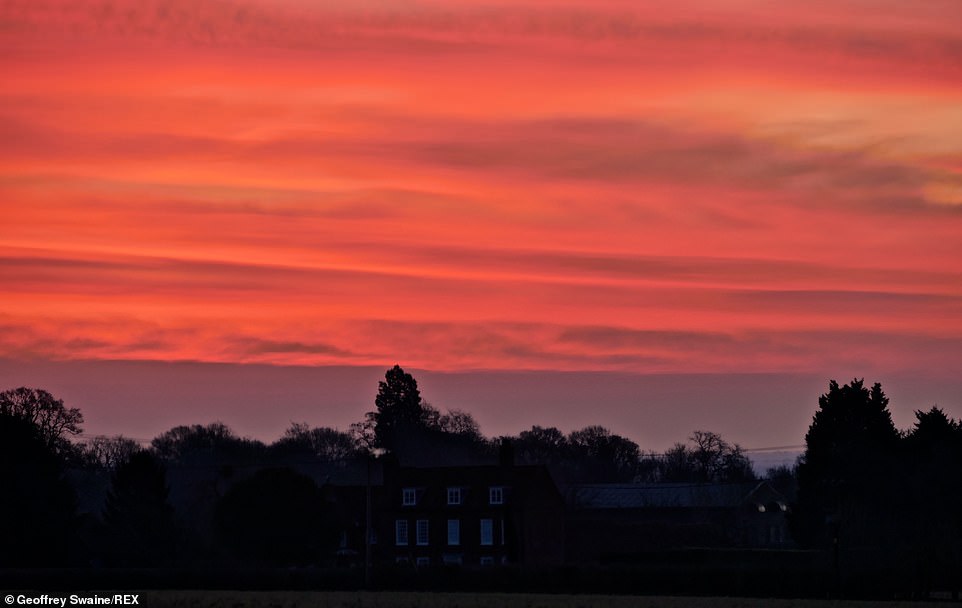 Yellow weather warnings for snow and ice are in place across most of Scotland and parts of northern England and Wales on Saturday, and again on Sunday, as well as eastern parts of Northern Ireland. Pictured, a red sky in Dunsden, Oxfordshire 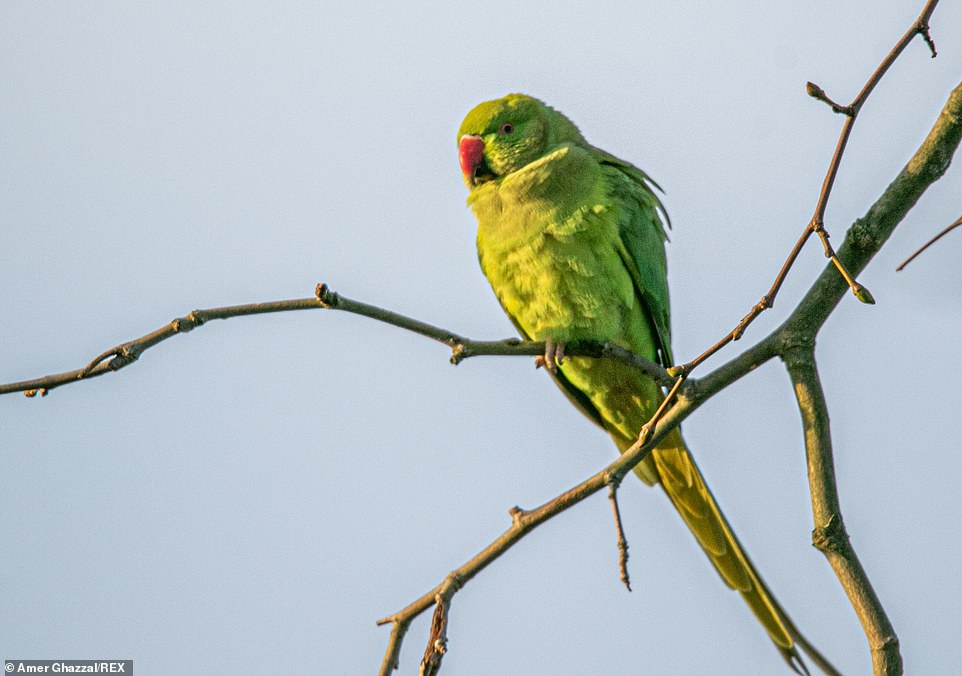 A parakeet perched on a tree during sunny winter morning in Wimbledon. The bird species is now common across the capital and are undaunted by the cold winter weather 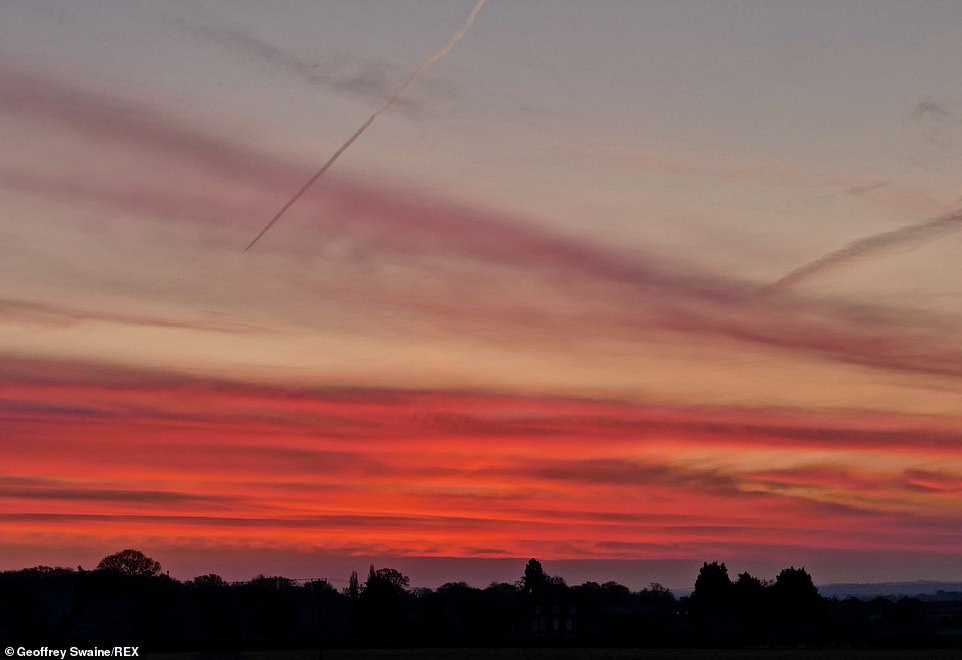 The sunrise is pictured on Saturday morning in Dunsden, Oxfordshire. Public Health England (PHE) has extended its cold weather alert through the weekend and has urged people to check on vulnerable relatives and neighbours 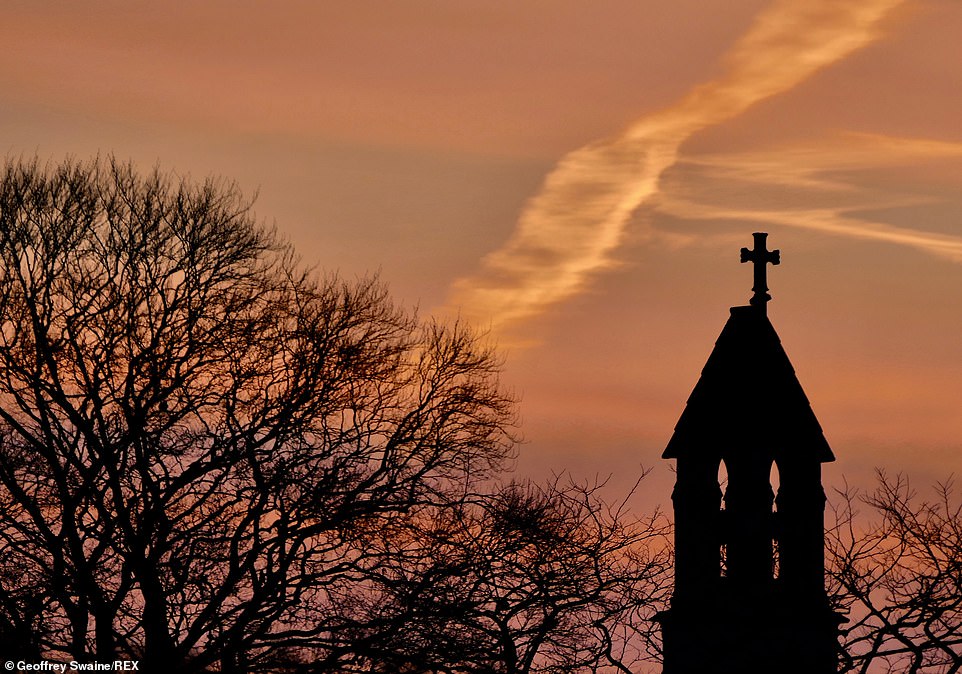 Pink skies are pictured during sunset in Dunsden, Oxfordshire, on Friday morning

The chilly conditions have frozen Trafalgar Square’s fountains and brought large amounts of snowfall to regions across the country.

Public Health England (PHE) has extended its cold weather alert through the weekend and has urged people to check on vulnerable relatives and neighbours.

Dr Owen Landeg, group leader for extreme events and health protection at PHE, said: ‘Cold weather can have a serious impact on health, particularly for older people and those with heart and lung problems, as it increases the risks of heart attacks, strokes and chest infections.

‘Make a call, or socially-distanced doorstep visit if they live close by, to remind them to heat their home to at least 18C, 64.4F, and to keep up to date with the forecast.

‘It’s also helpful to check they have enough food and drinks and any medicines they need.’

Yesterday, temperatures in Ravensworth, North Yorkshire, dropped to minus 15.3C overnight on Thursday, a record February low for England. Parts of Britain saw 50mph gales on Friday with forecasters predicting another freezing weekend for most. 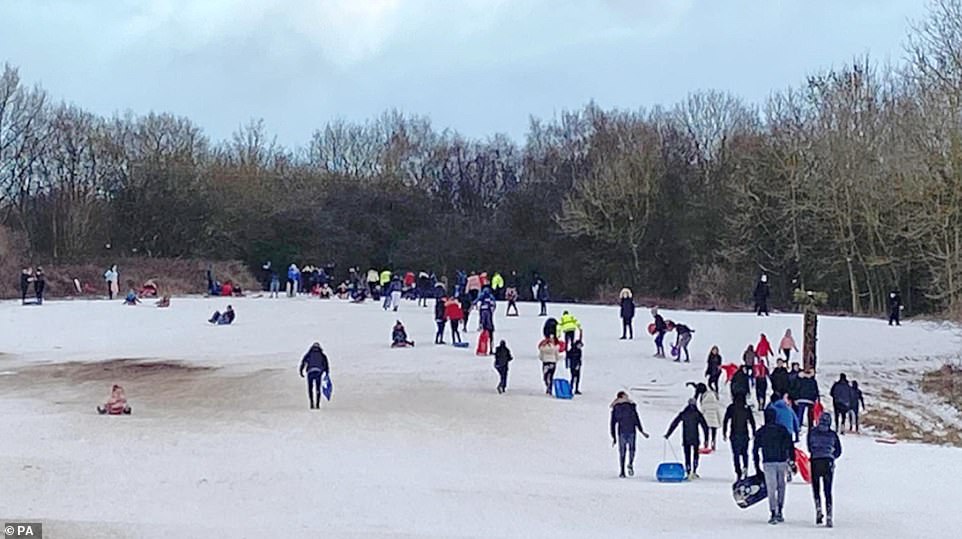 Many headed to the hills such as Flatts Lane Country Park in Middlesbrough on Friday to enjoy some sledging, despite police warnings about large gatherings 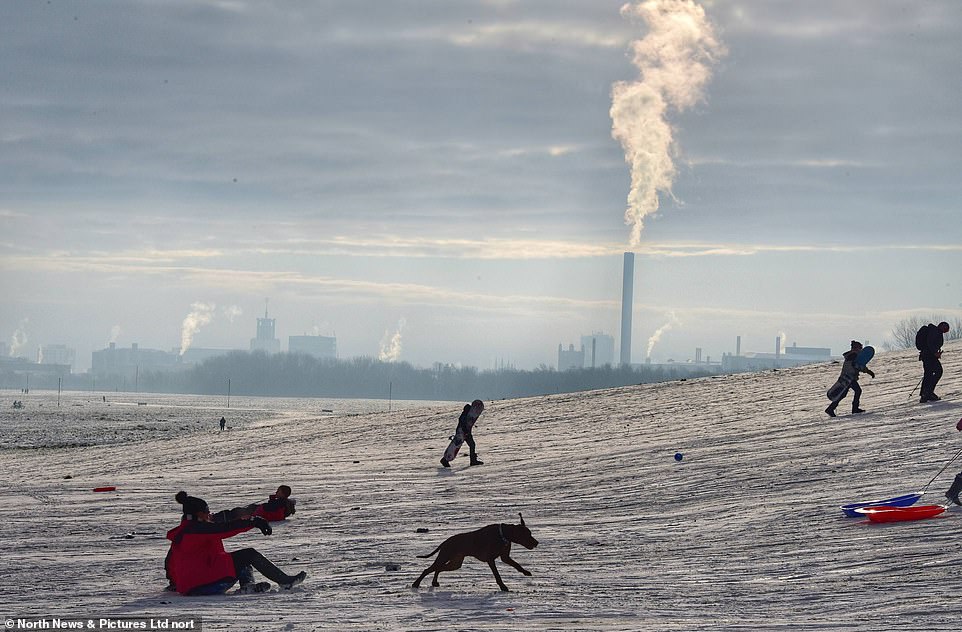 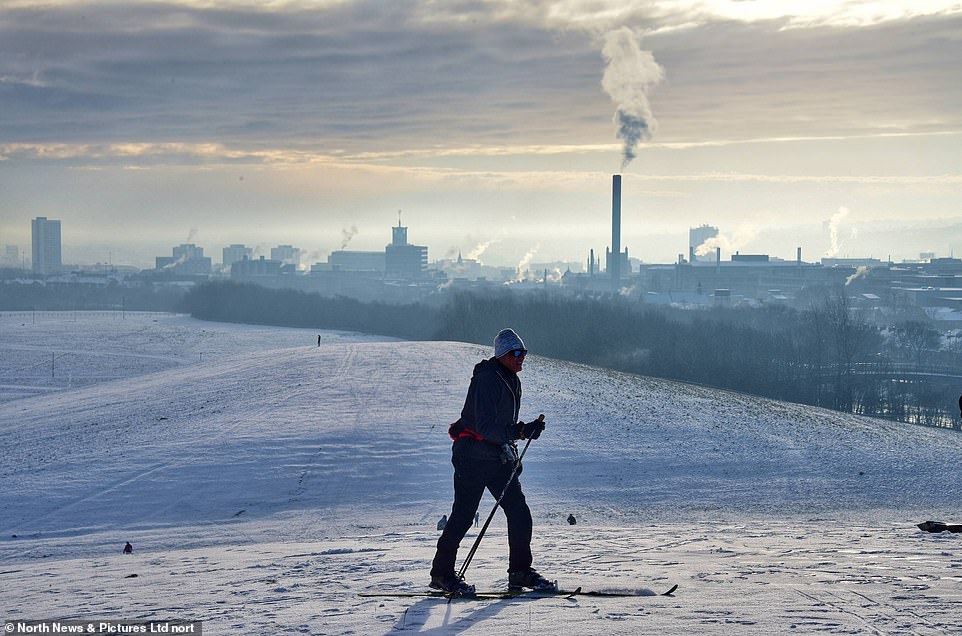 Meanwhile, the extreme cold caused wild fires in Devon, Cornwall and Scotland as icy conditions dried out vegetation, according to Scottish firefighters.

A huge blaze fuelled by fierce winds that engulfed swathes of Dartmoor on Thursday night had stopped spreading by Friday morning.

Warnings are in place for Scotland and Northern Ireland on Saturday but the Met Office said that more may be needed for Sunday due to a risk of freezing rain and ice.

Councils across England urged people to take ‘extra care’ in the treacherous conditions and several were forced to briefly suspend waste collection services after heavy snowfall this week.

Marco Petagna, meteorologist at the Met Office, said conditions would be milder going into the weekend, with areas such as Cornwall seeing up to 5C, and temperatures are expected to rise back up into double figures across south western areas.

The Met Office said it was unlikely that any record low temperatures would be set in the coming days, with slightly milder temperatures expected over the weekend. By Sunday, temperatures could reach 10C (50F) in south western areas of Britain and 5C (41F) as far north as Manchester.

However, forecasters have warned there is still a chance of freezing rain elsewhere, with those in the Met Office saying they may yet issue a warning for ice – which would bring ‘significant hazards’.

Oli Claydon, a spokesman for the Met Office, explained that some of Britain’s temperature records had been broken by ‘quite some way’ on Wednesday.

‘Usually you’d expect records to be broken by point such-and-such of a degree but here we’re looking at big differences,’ he said.

It was also the coldest February temperature since 1955, when Braemar reached -25C (-13F). 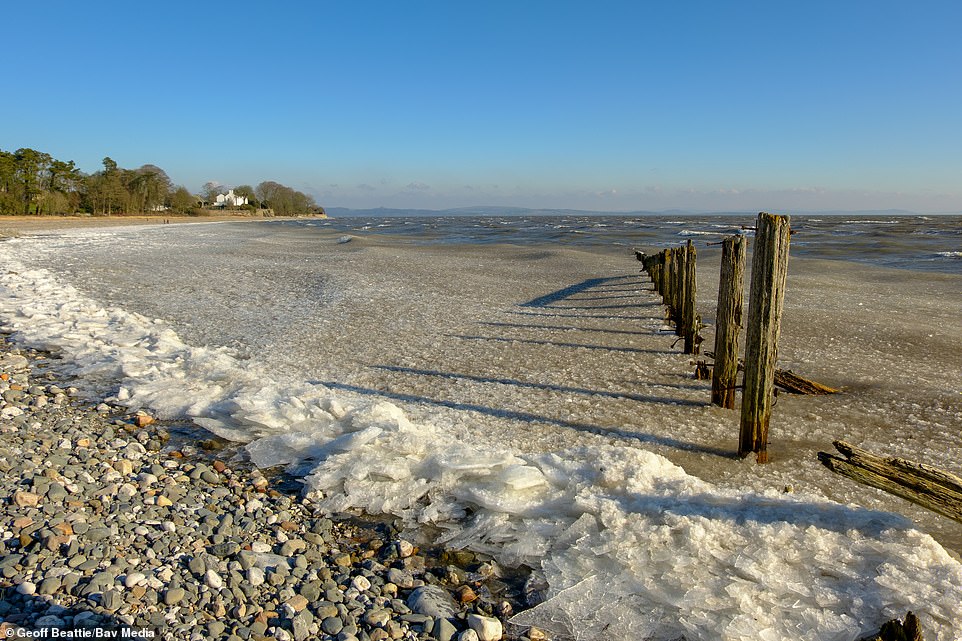 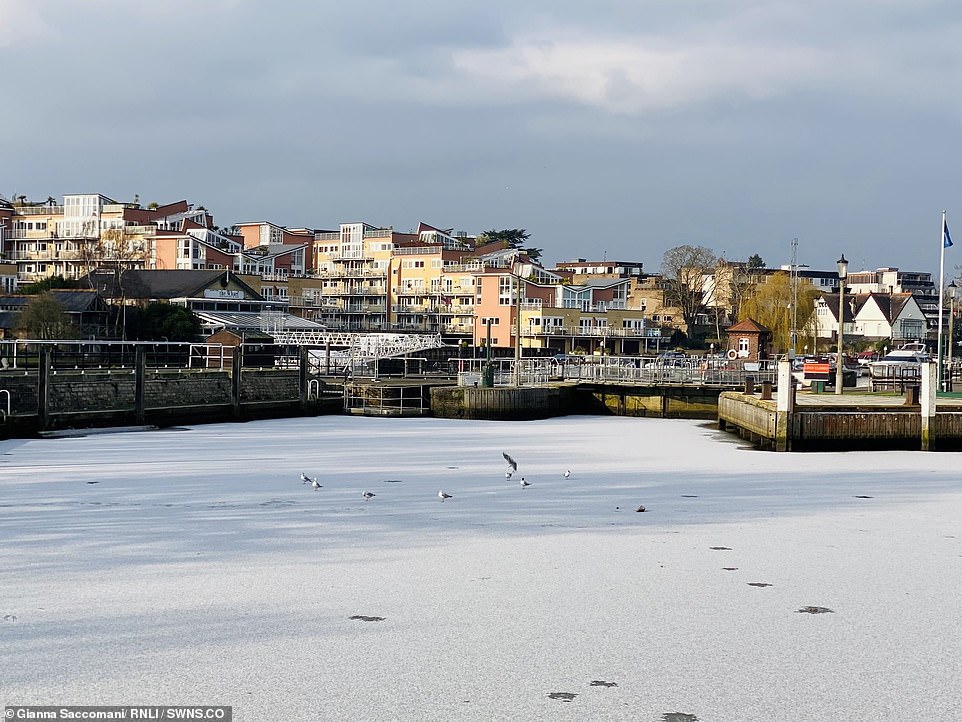 The Thames River in Teddington, south west London, froze over for the first time in over 60 years due to the ‘Beast from the East 2’ on Thursday 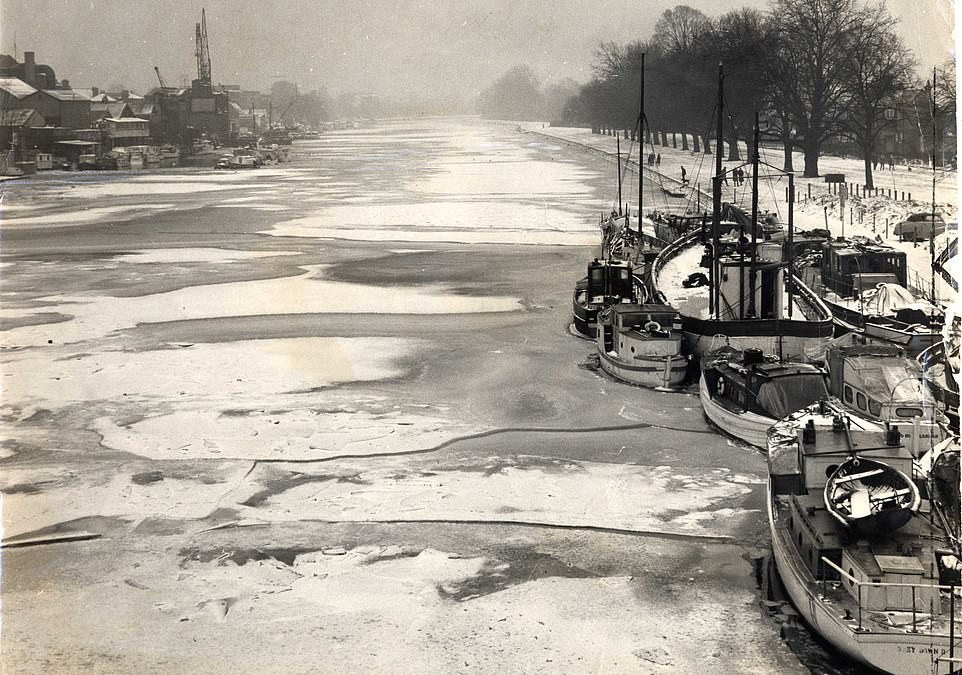 The last time the River Thames froze over was in the 1960s. Photograph shows inches of thick ice in Kingston during the last freeze 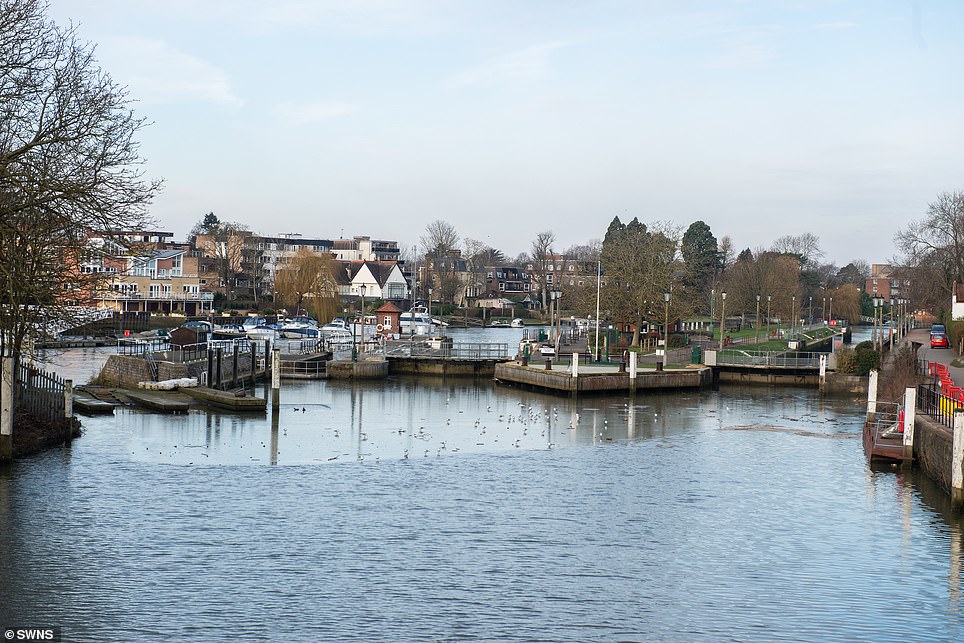 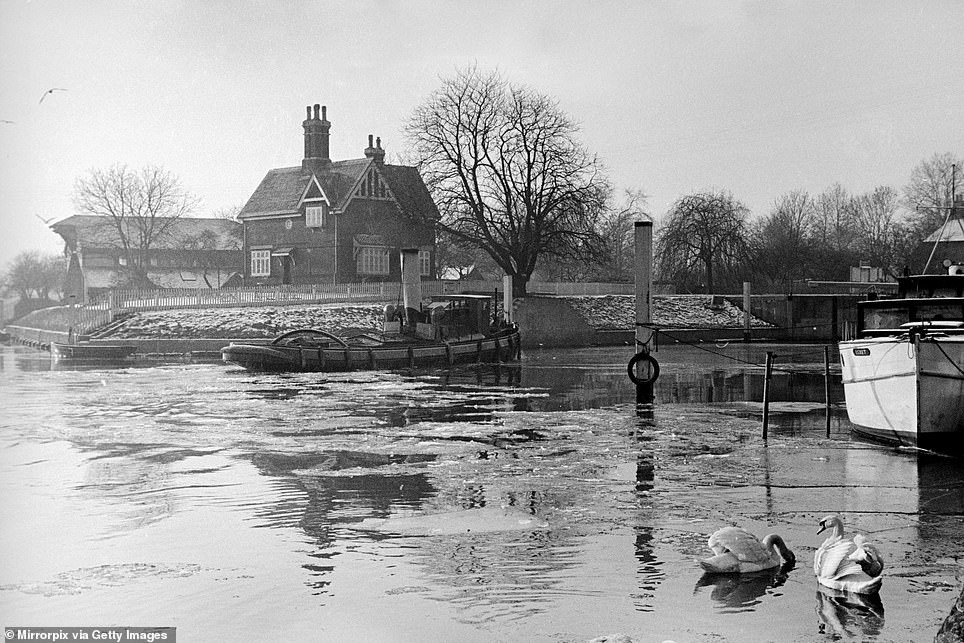 The River Thames in Teddington is pictured today, left, and during a particularly cold winter in 1940, right 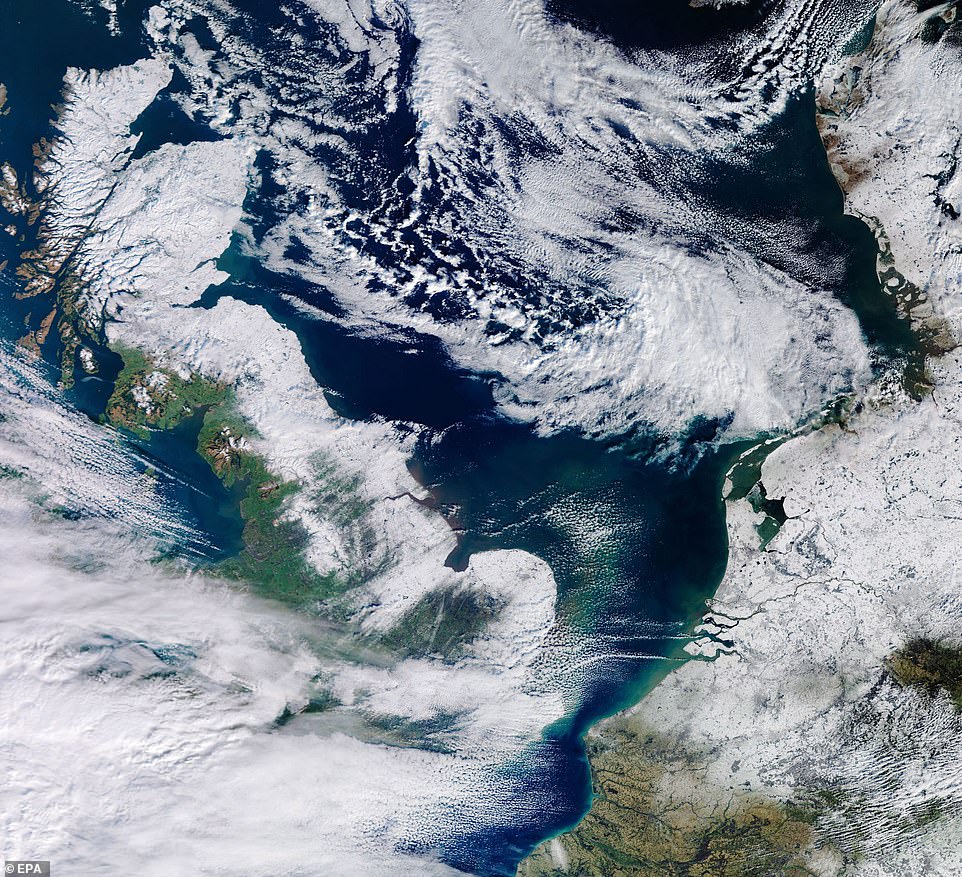 In the Capital, temperatures dropped to -5.2C in Northolt, west London, -3.8C at Heathrow, and -1.8C in St James’s Park in central London on Wednesday night.

Met Office spokesman Mr Claydon continued: ‘There’s still a couple of days of cold conditions to get through and a little bit more snow in parts of Scotland but the trend is that the weekend is going to herald a change to milder conditions.’

He warned that there was still a chance of freezing rain on Sunday and said the Met Office may issue a warning for ice, which would bring ‘significant hazards’.

On Saturday, wintry conditions are predicted anywhere from the Cotswolds northwards, extending through Wales, North-West England, Scotland and Northern Ireland.

In a weather warning, the Met Office said: ‘Snow is likely to spread east during Saturday with some accumulations in places and icy stretches of roads and pavements.’

Forecasters warn the snow could temporarily cut off some isolated rural communities and cause power cuts, as well as transport disruption. The snow is due to turn to rain later in the day as milder air sweeps in behind.

By Sunday, further snow is expected near the coasts of Scotland, North East England and Yorkshire, with 3-8cms (1.2-3.2ins) possible.

Britain’s Big Freeze: The last time the River Thames froze over was 1963 when the nation saw average temperatures plummet to -2C

The River Thames froze regularly from the mid-14th Century to the 19th Century as the country experienced a period known as the ‘Little Ice Age’ because of its severe weather over winter.

Since embankments were constructed each side of the river in 1869 the water has flowed much faster, putting a stop to the Frost Fairs that had been enjoyed for hundreds of years.

The last official white Christmas in London was in 1999, but the river hasn’t frozen since the winter of 1963 – when temperatures in the UK averaged minus 2C. 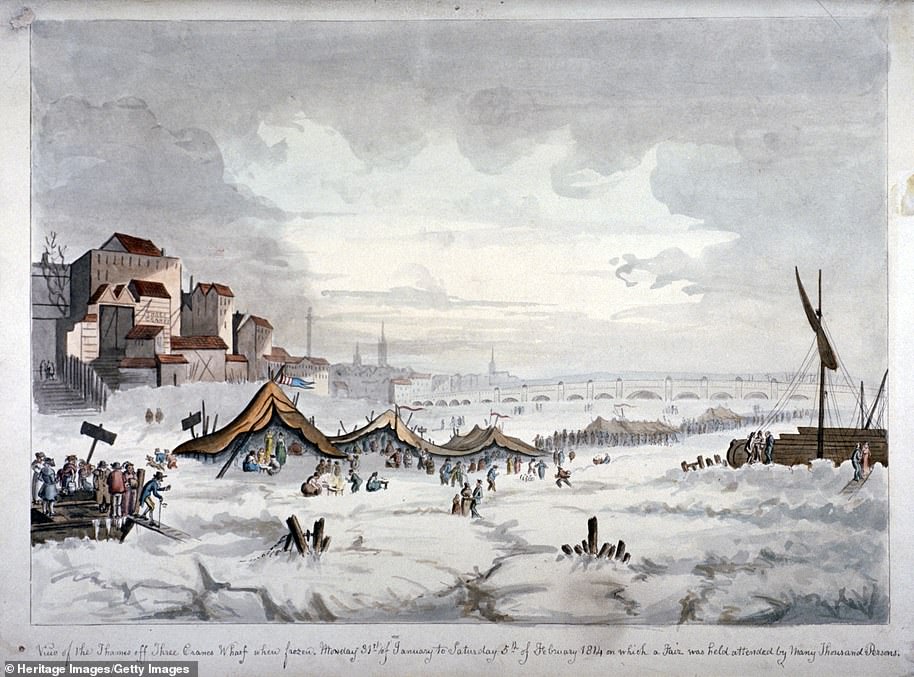 View of a frost fair on the River Thames in London in 1814. Three Cranes Wharf is on the left. This was the last frost fair to be held on the Thames before the fast-flowing water stopped freezing over 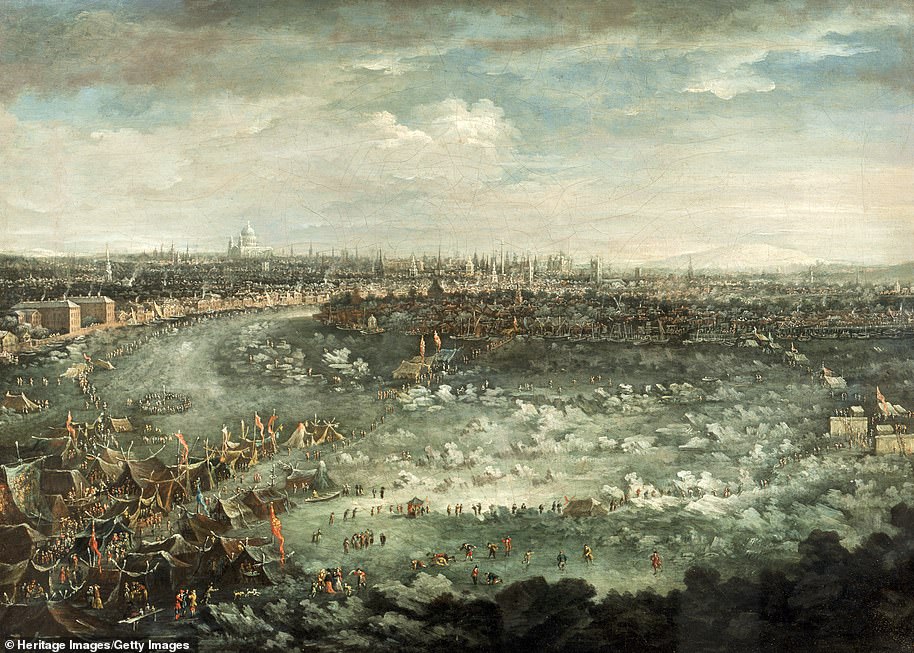 ‘The Thames During the Great Frost of 1739’ shows the Frost Fair in the foreground and figures inspecting the incomplete piers of Westminster Bridge on the right. In the distance is a view of the City of London including St Paul’s Cathedral and spires of the City churches 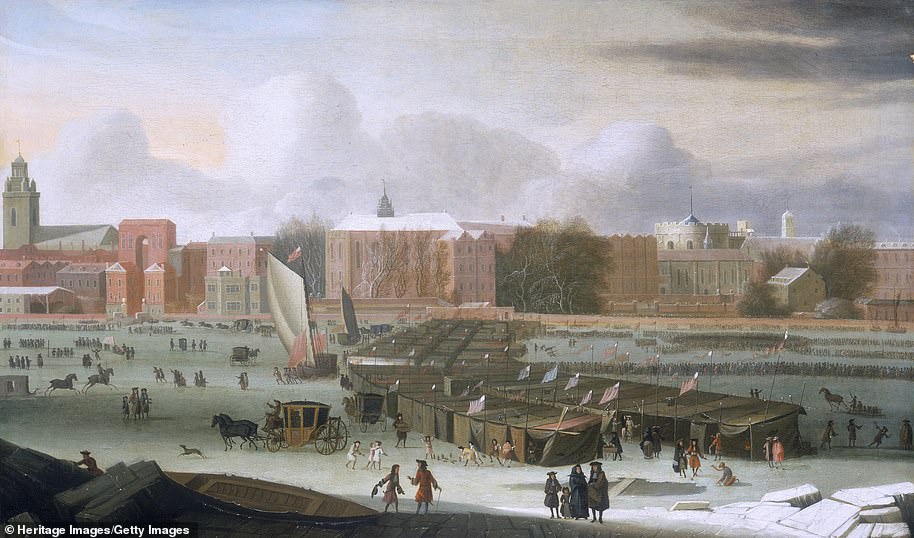 ‘A Frost Fair on the Thames at Temple Stairs’, around 1684. This fair, one of several built on the frozen Thames during severe winters, was exceptional in that it lasted from December 1683 until February 1684. The booths stretch from Temple Stairs to Old King’s Barge-House. In the foreground is a large hole in the ice, with stalls behind, and people going for rides in a wheeled boat. Other amusements include nine-pins and sledging. There are even coaches and horses

Snow fell in parts of the UK every day between Boxing Day 1962 and March 6, 1963, with a blanket of the white stuff covering London for two months.

Airports closed, the Thames froze over and the cost of fresh food increased by 30 per cent as Britons struggled to cope with the extreme weather.

Seven inches of snow were measured in Chelsea, with 14 inches in Gravesend as Siberian winds brought snow drifts to the UK.

On Thursday February 11, parts of the River Thames in Teddington froze over for the first time in 60 years as freezing weather conditions gripped the UK once again.

It has frozen over at least 23 times since the 1300s – around one year in every ten during the 17th Century – but due to the removal of the old London Bridge in 1831 more water from the sea is allowed to pass unencumbered.

Frost fairs were a regular occurrence over winter in London and included dancing, football, nine-pin bowling, and unlicensed gambling. The first known event actually recorded as a Frost Fair was in 1608. The last was held in 1814.