Get the sandbags ready! Britain faces 98 flood warnings and alerts with heavy rain on the way as Great Ouse bursts its banks to engulf nearby homes

Parts of Britain are set to see heavy downpours in the coming days, with forecasters issuing 98 flood warnings and alerts as the Great Ouse burst its banks.

Aerial pictures of Cambridgeshire this morning show the aftermath of the River Great Ouse overflowing following the recent heavy rain and snow – with more miserable weather predicted for next week.

Up to 2.3 inches of rain could fall across large parts of western England and Wales between Monday and Wednesday, forecasters warn, as the Met Office issued a yellow rain warning, saying to expect ‘heavy and prolonged’ downpours with some snowmelt across hilly areas.

As many as 82 flood alerts have now been issued for parts of England, advising people to ‘be prepared’ for possible flooding, while another 16 flood warnings, advising ‘immediate action’, were published.

It comes after last week saw snow coat parts of Britain, with drivers complaining of treacherous conditions on the roads amid temperatures of -11.8C (10.8F) in Ravensworth, North Yorkshire on Friday – in the coldest weather recorded in England since January 31, 2019, when the mercury dipped to -13.2C (8.2F) in County Durham.

Forecasters said that yesterday was likely to be the coldest day of the weekend with drier and brighter weather expected today. Greg Dewhurst, a Met Office forecaster, said: ‘Temperatures are unlikely to rise above 10C, with a lot of areas closer to freezing.’

After the latest weather front shifts, forecasters expect a wetter, warmer weather into next week with snowfall confined to the highest elevations in the north.

The weather will stay dry but frosty today for most, ranging from a high of around 9C in the south to 5C in northern parts of Britain.

But rain and hill snow will spread across parts of Scotland later on, next week will see ‘heavy and prolonged rainfall’ along with snow, likely leading to floods. 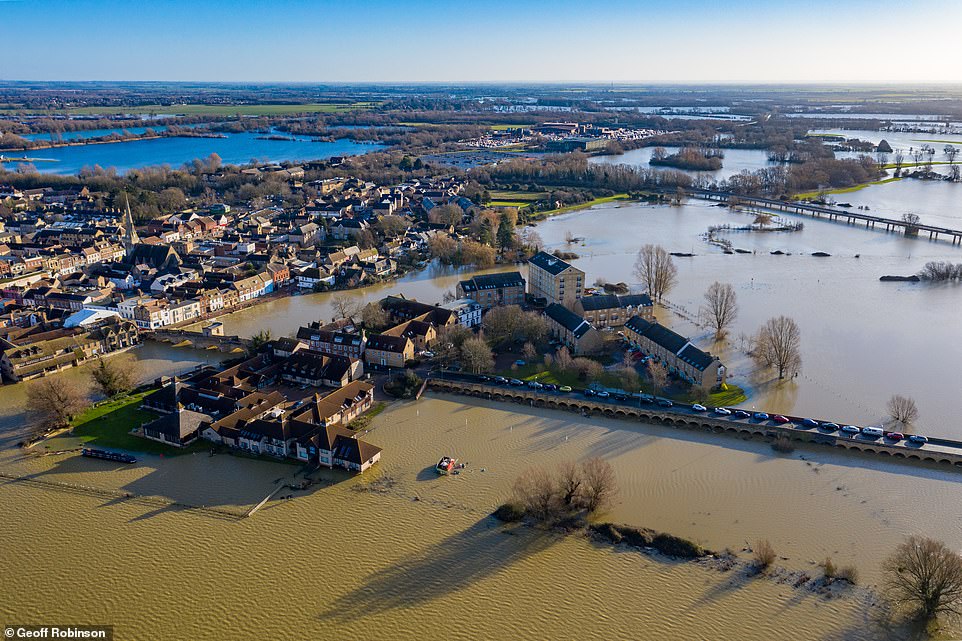 The floods around St Ives, Cambridgeshire, on Sunday morning after the River Great Ouse burst its banks after the recent heavy rain and snow 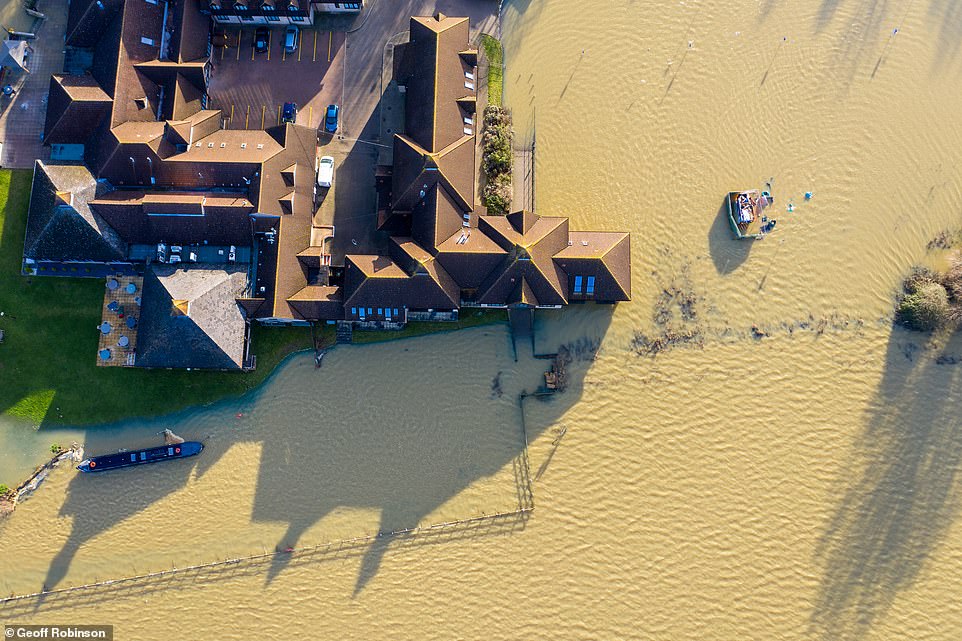 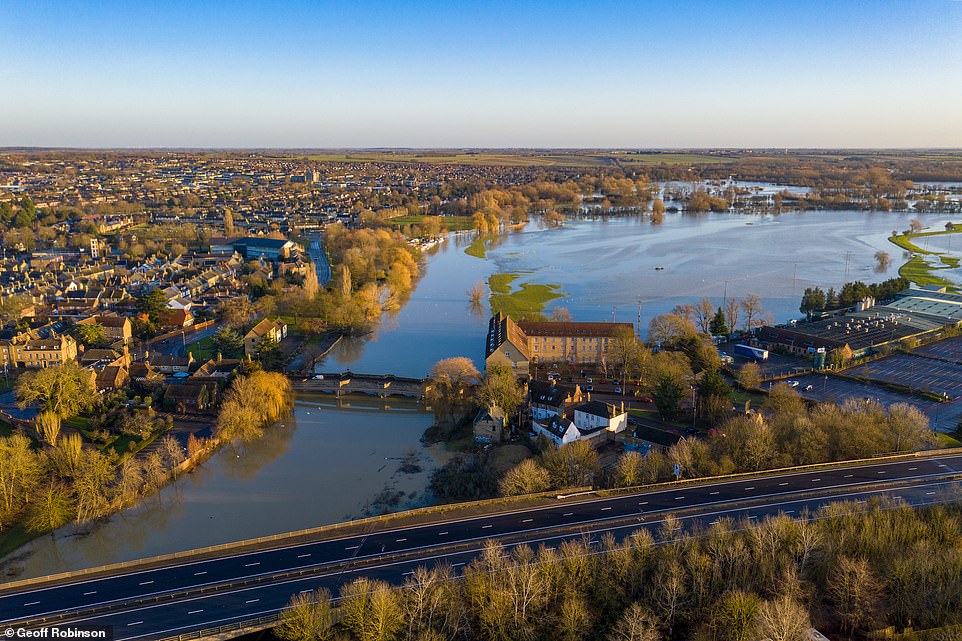 Floods around Huntingdon, Cambridgeshire,on Sunday morning after the River Great Ouse burst its banks after the recent heavy rain and snow 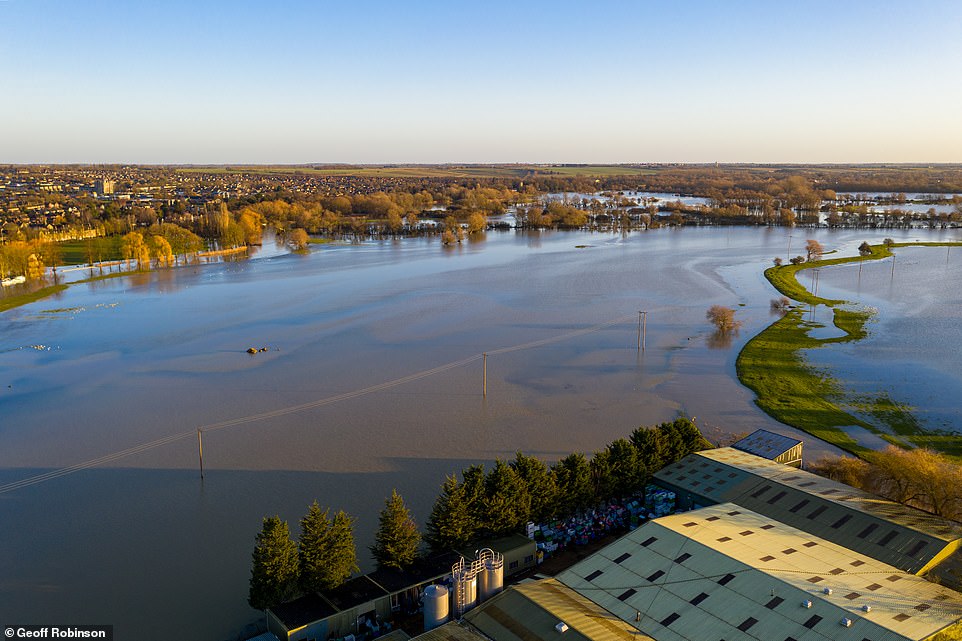 The Met office forecast states today there will be a mixture of sunny spells and showers. The showers becoming mostly confined to northwestern parts with a longer spell of rain for Scotland this afternoon, whilst southern and eastern England become mostly dry 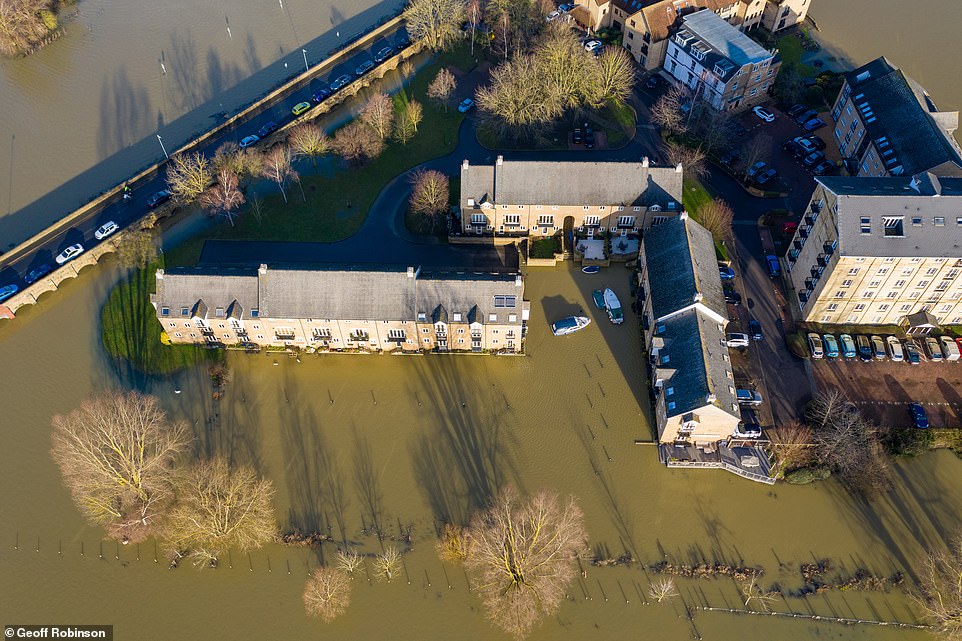 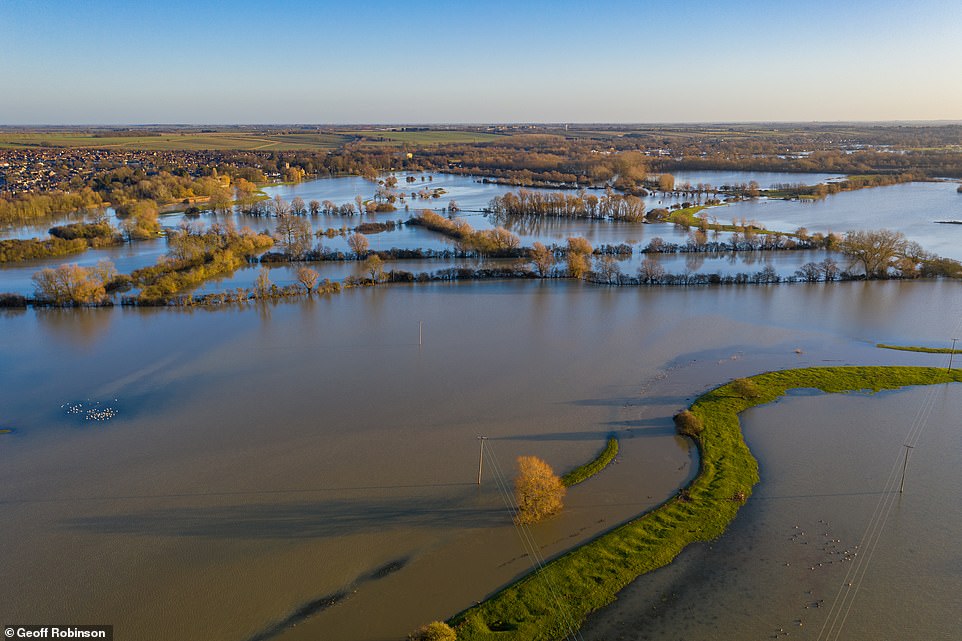 Picture dated January 17 shows the floods around Huntingdon, Cambridgeshire,on Sunday morning after the River Great Ouse burst its banks after the recent heavy rain and snow.More flooding is expected this week 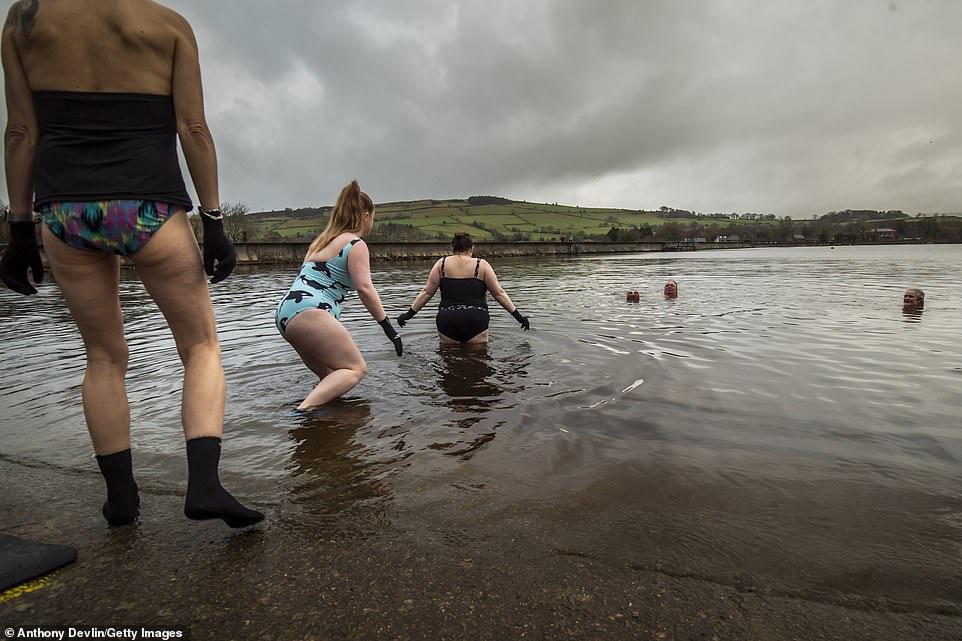 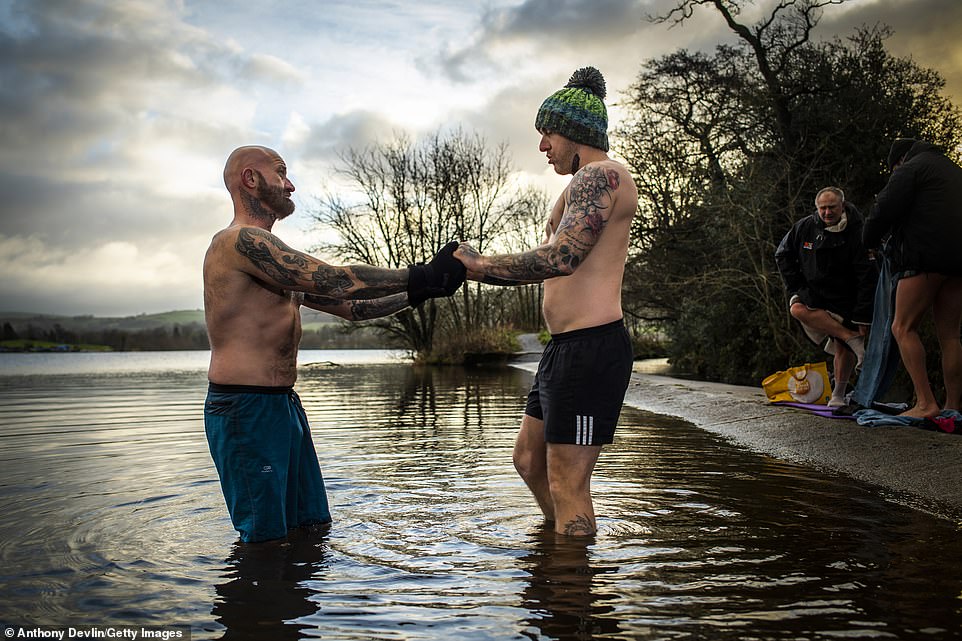 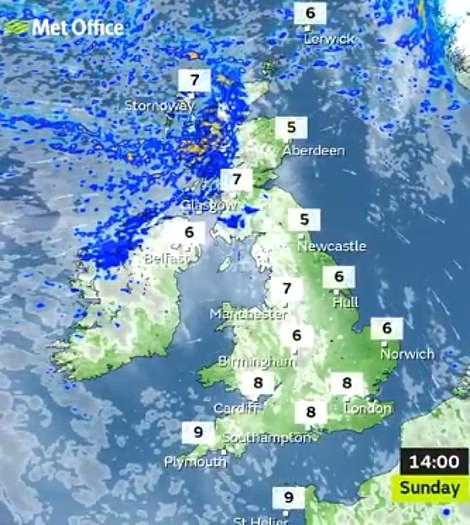 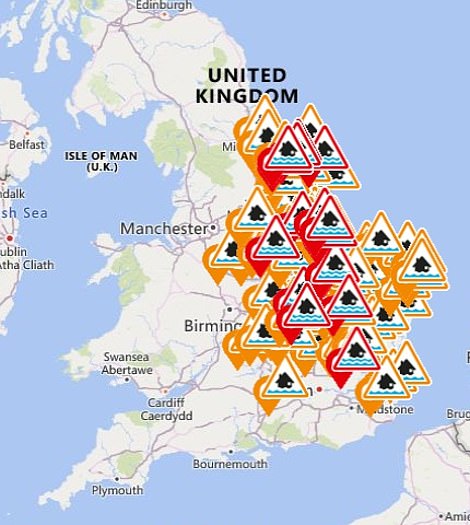 As many as 82 flood alerts have now been issued for parts of England, advising people to ‘be prepared’ for possible flooding, while another 16 flood warnings, advising ‘immediate action’, were published 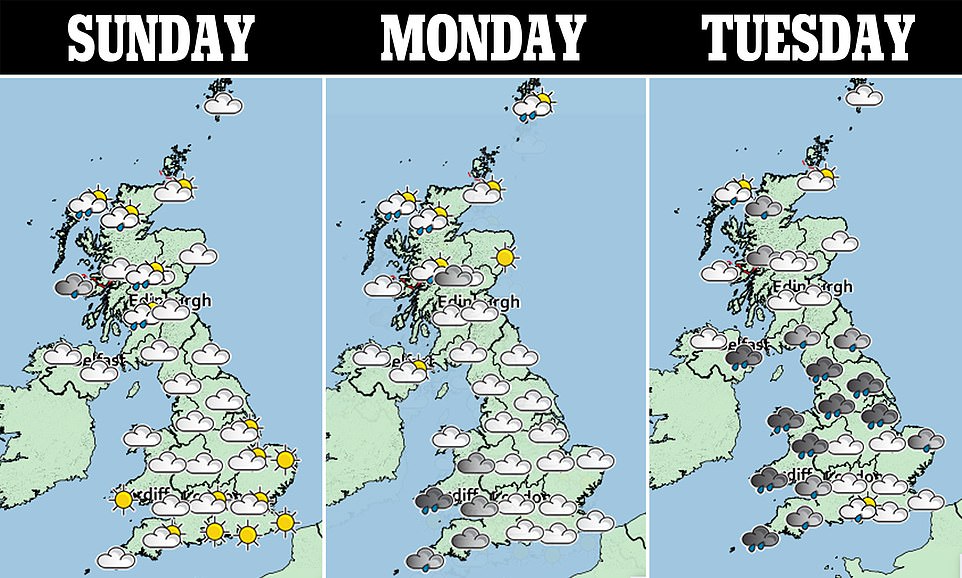 Southern and eastern parts of the UK will mostly see ‘dry, sunny spells’ on Sunday, according to the Met Office.

North-western regions are expected to see showers, with a ‘spell of more persistent rain’ later on in the day.

Craig Snell, a Met Office forecaster, said: ‘Sunday will certainly be a calm day for many, with dry, sunny spells across southern regions in England and Wales.

‘Although it will start rather chilly with some icy patches across eastern areas still in place from the day before.

‘But it will also be the slightly warmer day of the weekend- with highs of around 9C in parts during the afternoon’.

However, torrential downpours are set to move in from Monday, which could cause flooding as it ‘combines with melting snow’, according to Mr Snell.

The Met Office has issued a yellow rain warning for Monday evening, lasting until Wednesday.

The warning, which covers parts of north-west England and large swathes of Wales, says there could be a ‘danger to life’ from possible ‘fast flowing or deep floodwater’.

Such conditions could bring delays to public transport, damage to buildings or power-cuts, the Met Office said.

Mr Snell added: ‘Around 30-60mm of rain could be seen in the worst affected regions, with 200mm in the most hilly areas. 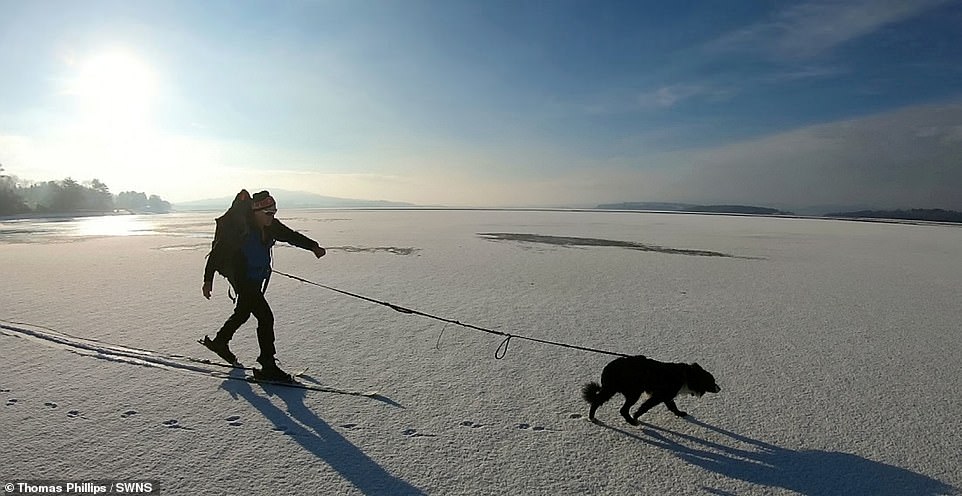 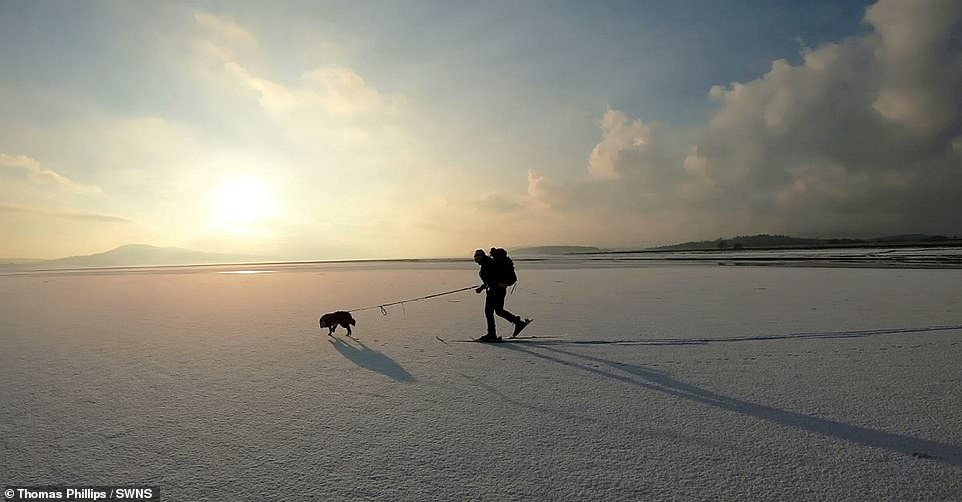 ‘This could cause some snowmelt flooding issues, so people are advised to be very careful when travelling to work.’

The Met Office has issued yellow weather warning for rain from Monday through to Wednesday, covering Wales and parts of North-West England, from Manchester up to the Scottish border.

Nick Silkstone, deputy chief meteorologist, said: ‘During Monday and Tuesday we will see large rainfall totals across the high ground of western Britain.

‘This rainfall combined with snowmelt will lead to a high volume of water moving through river catchments in these regions.’

During Wednesday, an area of low-pressure over the North Sea will bring colder air down across the UK, heralding a return to colder conditions, with wintry showers over higher ground.

However, those fearing a return of the Beast from the East – the Siberian weather system that brought heavy snow in February and March 2018 – can rest easy after the Met Office said it is now unlikely to return in the coming weeks. There were also 25 flood warnings across England on Saturday, stretching from the South East to the North East.

Drier, brighter spells are expected across much of southern and eastern parts today. North-western regions are expected to see showers, with a ‘spell of more persistent rain’ later on in the day. 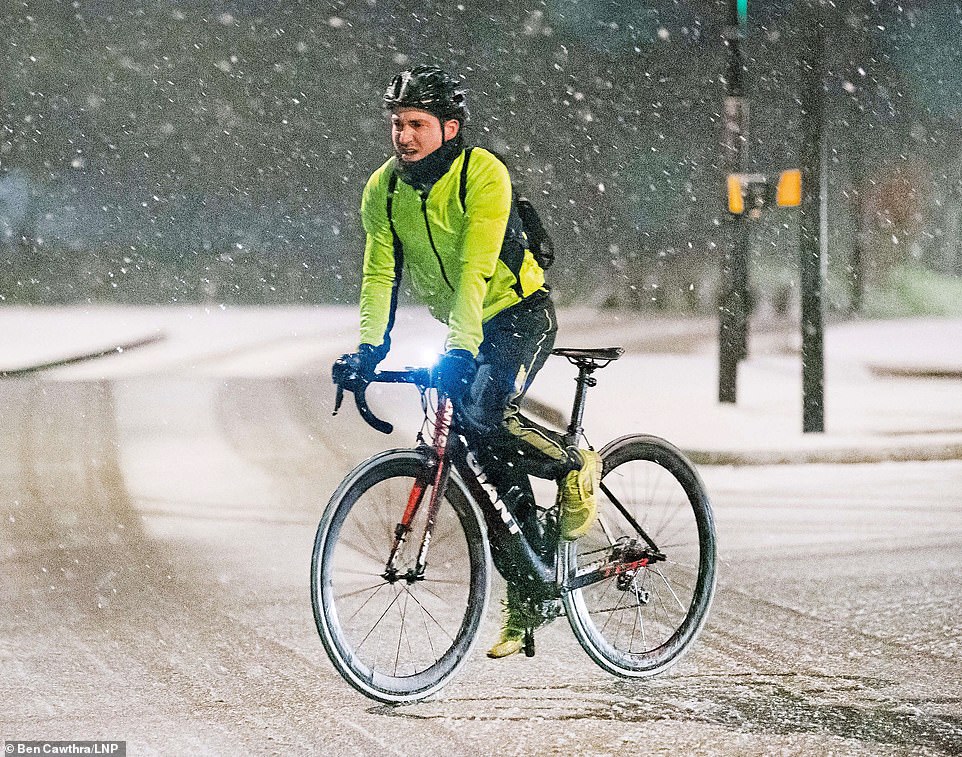 This cyclist carefully makes his way across a road in Hampstead, north London in chilly conditions 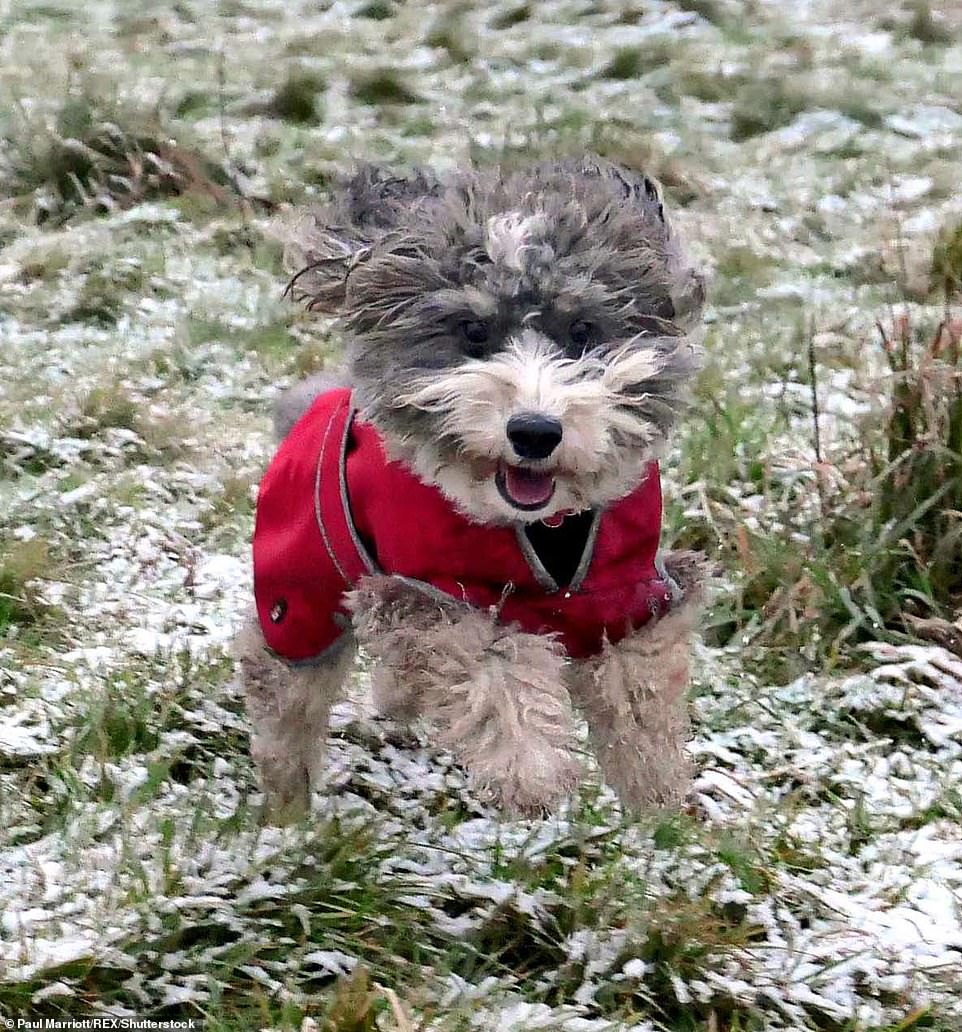 Cookie the Cockapoo did not mind the light dusting of snow near her home in Peterborough, Cambridgeshire

The coronavirus vaccine rollout was also affected by the weather. Several over-80s who were due to receive their jab at Newcastle’s Centre for Life on Friday were told they could rebook rather than risk making a trip in the icy conditions.

Go Pro footage taken by adventurous Tom Phillips, 57, show him traversing the sprawling sands of Morecambe Bay at a ‘decent pace’, with the help of his beloved two-year-old border collie Bud.

The video clips show Mr Phillips on a pair of 40-year-old skis connected to Bud out in front, who is fitted with a special harness.

He said the idea came to him first thing on the morning of January 9 when he looked out the window and saw it had snowed.

Mr Phillips, who was pictured riding through the snow with his dog, said the flatness of the beach at Morecambe Bay combined with the weather conditions were ‘perfect’ for skiing, enjoying the unusual exercise alongside his partner Penny Attwood, 57, who can be seen in some of the pictures.

Mr Phillips said: ‘It was a spur of the moment thing and not something I have ever done before.

‘I can see the beach from my window and when I saw it covered in snow the idea sprang into my mind.

‘We went up to the loft and grabbed our skis and set off from our doorstep.’

He added: ‘The conditions were perfect and we were able to have a really good ski.

‘Bud did a terrific job. He loves getting out and about and he’s always up for an adventure, so this was perfect for him.’

Mr Phillips said Bud has a special harness that enables him to pull weight safely and that the pair have used the same technique with a pushbike in the past.

He added: ‘Some people would see it and feel sorry for the dog but he’s very safe and he actually enjoys it.’

Tom said the skis he dusted off and brought down from the loft were Nordic, meaning they are designed for cross country skiing.

He added: ‘They were just right for what we were doing.

‘Even though they are so old they held up well, we weren’t putting too much strain on them.’

Tom lives in the picturesque Cumbrian village of Arnside and enjoys exploring his beautiful surroundings with Penny and Bud.

He used to work as a mountain leader helping people navigate his local terrain.

Mr Phillips said: ‘I have good experience and knowledge of the area so we felt safe going out.

‘It’s not necessarily advisable for everyone but if you know what you’re doing it’s great fun.

‘We had a brilliant time and with the weather as it is now hopefully we’ll get back out.’