Washington: Former Trump campaign manager Brad Parscale is stepping away from his job at the campaign, officials say.

Parscale was admitted to hospital for his own safety on Sunday after threatening suicide while holding a handgun during a confrontation with his wife at his Florida home. 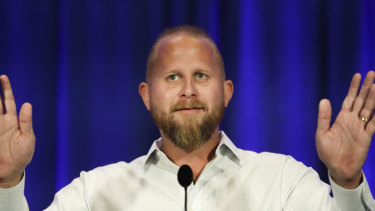 "We hope only for the best for Brad and his family," campaign spokesman Tim Murtaugh said on Wednesday night.

Politico first reported the move. It referred to a statement on Wednesday by Parscale and his wife in which she denied being abused by her husband.

The couple said they eagerly waited for facts to come out. In a police report on Sunday, Candice Parscale told officers her husband hit her.

She called Fort Lauderdale and told the officers upon their arrival that "her husband was armed, had access to multiple firearms inside the residence and was threatening to harm himself".

Parscale was in the house with 10 guns and had been drinking heavily when the police arrived, according to a police report released on Monday.

His wife had escaped the house after he cocked a gun and threatened suicide, the report said.

Her arms were bruised, and she told officers that her husband had hit her days earlier, according to the police report.

He was tackled by a SWAT team and taken to hospital under Florida law.

Parscale was the campaign manager for almost three years until July, when he was demoted by the President.

He had come under scrutiny for his spending as campaign manager but had remained close to the Trump family.

Parscale had told others that he was upset by his demotion and attacks from people who were questioning his behaviour as campaign manager.