A 15-year-old boy has been charged with murder over the fatal stabbing of Melbourne teenager Hashim Mohamed in front of onlookers at a packed St Kilda beach last year.

The teenager has been in custody since being charged in December with offences including violent disorder and affray in relation to the fatal attack. 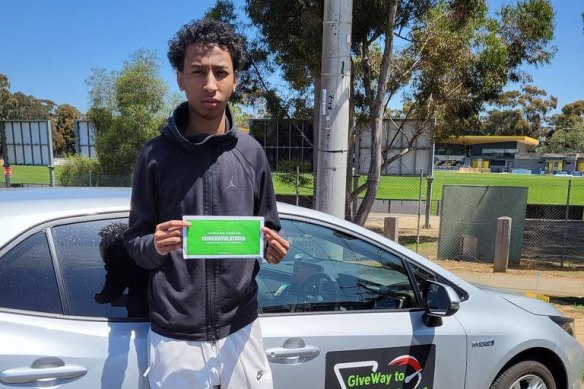 Hashim Mohamed died after being stabbed in St Kilda in December.Credit:Facebook

The 15-year-old from Taylors Hill, who cannot be named due to his age, is the first person to be charged with murder over the stabbing and will face a children’s court at a later date.

He is among seven teenagers aged between 15 and 18 who have been charged in relation to Mohamed’s death. They face a range of assault, drug and weapons charges.

The St Kilda foreshore was heaving on December 4 with people celebrating the first weekend of summer.

Mohamed, who had just gotten his driver’s licence and dreamed of owning his own business, was at the beach with friends when a brawl broke out between two groups of young males about 7.30pm.

The 18-year-old from Tarneit in Melbourne’s west was found unresponsive with a knife still in his back near Pier Road. He was taken by ambulance to The Alfred hospital, where he later died.

Mohamed had narrowly survived a car crash that killed four friends in Truganina in 2021.

While the murder charge is a significant milestone in the intense seven-week police investigation, detectives believe there are still a number of witnesses who are yet to come forward with information, including Mohamed’s friends.

Crime Command Assistant Commissioner Bob Hill said those witnesses held crucial information about those who were present on the night and the circumstances leading up to the fatal attack.

“We know there are still people out there who have information about this incident who are yet to speak to police or have been reluctant to provide information,” Hill said.

“This includes a number of witnesses who were part of the groups involved on the night.

“Investigators are again appealing directly to those people to speak to us and tell us what they know – whether it’s the identity of others who were present on the night or any other information about the fatal stabbing.

“We know there were friends of the victim present on the evening who witnessed the stabbing – for the sake of Hashim and his family, please do the right thing and contact police.”