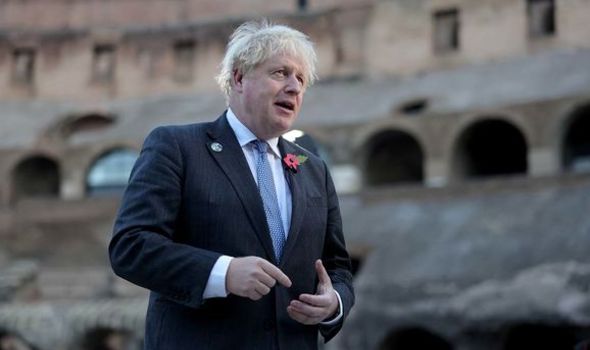 Most of the cash will go to help women and girls in the wake of the Taliban takeover of the country.

Two and a half million Afghans are expected to benefit from the “life-saving” support. There is deep concern that the humanitarian situation has “rapidly deteriorated”.

Mr Johnson will urge fellow leaders at the G20 summit in Rome to do more to support girls’ education around the world.

The latest funding is part of a £286million aid commitment to Afghanistan announced in September. It will be distributed by United Nations agencies and the Red Cross and be used to provide food, nutrition, shelter and medicine during the winter months; protecting women and girls from violence will also be a priority.

None of the money will go to the Taliban or be provided through government systems.

Mr Johnson said: “Two months ago this week Nato withdrew its final forces from Afghanistan after the most extensive evacuation effort in the alliance’s history, an effort which saved a huge number of lives. We now have a responsibility to protect the people of Afghanistan most at risk under the Taliban regime, particularly women and girls.

“Today’s funding will provide urgent protection for the most vulnerable people. But preventing a humanitarian disaster in Afghanistan and preserving the gains of the last twenty years will require a truly global effort.”

The Taliban seized control of the country in August and 15,000 British nationals and vulnerable Afghans were brought to the UK under Operation Pitting. As part of support for Afghans starting new lives in the UK, £25million has been provided towards housing, schooling and healthcare.

Mr Johnson will today push for greater education opportunities for girls across the globe, saying: “We must educate our daughters as surely as we educate our sons. That is the silver bullet, the Swiss army knife, the Black and Decker toolkit that solves an abundance of problems.

“For every extra year a girl in the developing world spends in secondary school, her future income rises by 25 percent and her own children will be twice as likely to go to school themselves – and 50 percent more likely to be immunised against killer diseases.”