BORIS Johnson has said we "must face the reality of regime change in Afghanistan" during an emergency Commons debate this morning.

The PM was bombarded with questions across the packed chamber about the UK's withdrawal, engagement with the Taliban and Kabul evacuation. 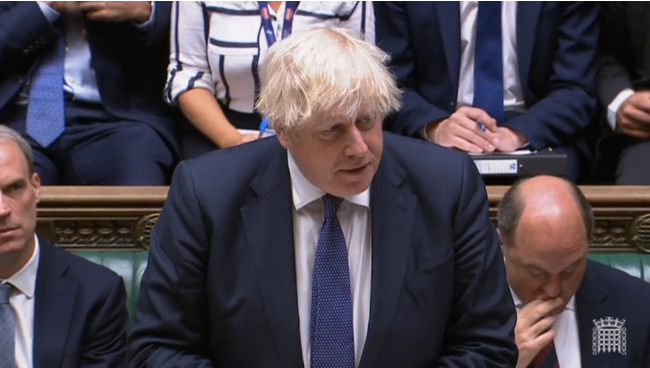 Tory big-hitters including Theresa May and veteran Tobias Ellwood turned the screw on their leader, who was forced to fend off a swell of criticism.

Mr Johnson paid tribute to the 150,000 British troops who have fought in Afghanistan during the past 20 years.

He insisted the mission had been "a success" and that loved ones of fallen troops should be "deeply proud" of their achievements.

But he said Britain must now accept the country was in the grip of the Taliban and focus on holding the militants to their commitments.

The PM said: "We have agreed that it would be mistake for any country to recognise any new regime in Kabul prematurely, or bilaterally.

"Instead, those countries that care about Afghanistan's future should work towards common conditions about the conduct of the new regime before deciding together whether to recognise it, and on what terms.

"We will judge this regime based on the choices it makes an action rather than by its words."

Many MPs used the recall of Parliament from summer recess to hammer the Government for withdrawing British troops from Afghanistan.

Shifting the blame onto President Biden, the PM said the UK's hands were tied when the US pulled back their forces earlier this year.

He said: "The West could not continue this US-led mission, a mission conceived and executed in support of America."

Former PM Ms May asked what back-up plans were drawn up so that the UK didn't withdraw "on a wing and a prayer", hoping it "would be all right on the night".

The ex-premier railed: "Was our intelligence really so poor? Was our understanding of the Afghan government so weak? Was our knowledge of the position on the ground so inadequate?"

Mr Johnson said the Taliban's power-grab had been faster "than even the Taliban predicted" but insisted the Government had not been caught "unawares".

He hit back: "What is not true is to say the UK Government was unprepared or did not foresee this."