So you’re definitely not leaving? Boris Johnson joins LinkedIn a week after rubbishing rumours he planned to quit as PM in six months

Boris Johnson has joined jobs network LinkedIn – just a week after rubbishing rumours that he would be leaving Downing Street in six months.

Announcing his new profile on the professional networking site, the PM said he was using the platform to ‘connect more directly’ with British businesses.

The new profile lists the PM’s previous jobs in politics such as Foreign Secretary and Mayor of London, but does not include his previous work as a journalist.

Last week Mr Johnson dismissed ‘nonsense’ claims from chief aide Dominic Cummings’ father-in-law that he was planning to stand down early next year.

Sir Humphry Wakefield had reportedly suggested that Mr Johnson was on the way out because he was struggling with his health in the wake of his own recovery from Covid-19. However, the PM insisted: ‘If anything, far better as I’ve lost some weight.

‘Not enough, but I have lost at least a stone and a half.’ 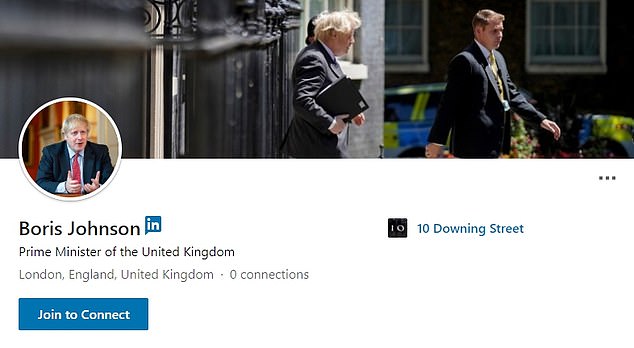 Announcing his new profile on the professional networking site, the PM said he was using the platform to ‘connect more directly’ with British businesses 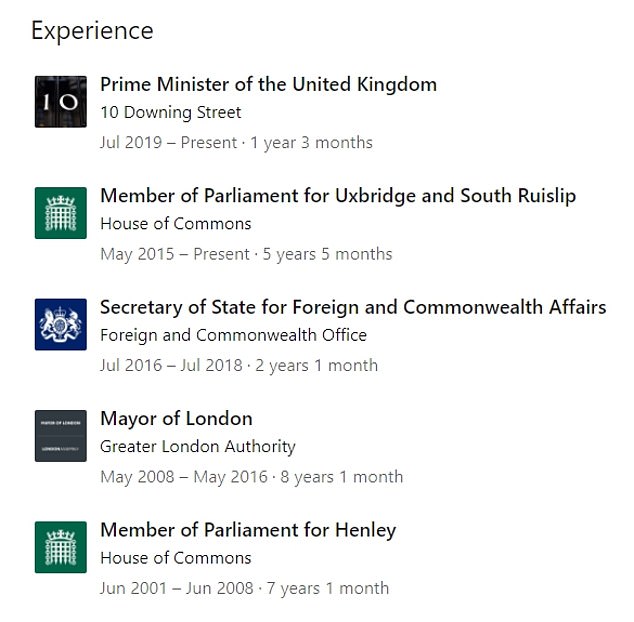 The new profile lists the PM’s previous jobs in politics such as Foreign Secretary and Mayor of London, but does not include his previous work as a journalist 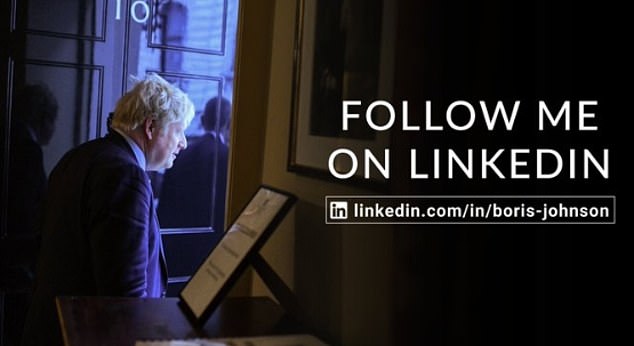 In a video launching the new account, Mr Johnson insisted he was ‘trying to do right’ for companies across the country amid fears the withdrawal of Rishi Sunak’s massive furlough system could lead to a spike in job losses.

He said: ‘I just wanted to let you know that I’m now on LinkedIn and that’s because businesses of all sizes are vital to this country and I want to connect more directly with you as we build back better, stronger than ever before.’

On Twitter, Mr Johnson said: ‘Throughout the pandemic, so many businesses have done amazing work to support their staff and their community.

‘And we’re going to do right by them too. Follow my LinkedIn page for updates on the latest guidance and support for businesses.’

‘Nonsense, I am feeling far better – I’ve lost weight!’ Boris Johnson rubbishes claims he is planning to QUIT as PM in six months after Dominic Cummings’ father-in-law Humphry Wakefield said he ‘is struggling to recover from coronavirus’ 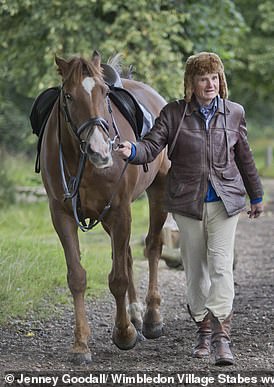 Sir Humphry Wakefield, whose daughter is married to Dominic Cummings, is said to have made the claim to a holidaymaker who visited his castle in Northumberland

Boris Johnson insisted he was fighting fit today – after Dominic Cummings’ father-in-law suggested he was planning to quit after struggling to recover from coronavirus.

Downing Street blasted as ‘total nonsense’ a suggestion that Mr Johnson could hand over power in six months time, made by Sir Humphry Wakefield.

He is said to have told a holidaymaker who visited his castle in Northumberland that the Prime Minister is still suffering longer-term ill effects of coronavirus and could resign.

But speaking on a visit to Appledore shipyard in Devon today, Mr Johnson was asked about the claim, saying: ‘It’s absolute nonsense.

‘I am feeling, if anything, far better as I’ve lost some weight.’

Baronet Sir Humphry, 84, a former soldier and interior designer whose journalist daughter Mary is married to top aide Mr Cummings, likened the Prime Minister to a horse that is made to work while injured, leaving it permanently lame, according to the Times.

‘If you put a horse back to work when it’s injured it will never recover,’ it reported him as saying.

No 10 said the profile had been launched to enable Mr Johnson to ‘engage directly with businesses and workers’, adding that it was ‘particularly important during the economic recovery from the coronavirus pandemic’.

‘You can expect to see on there a mixture of written and video content from the PM which will promote UK businesses, jobs and economic announcements, and also detail some of the visits and engagements the PM has with business,’ the PM’s official spokesman added.

‘I think a number of other leaders are on LinkedIn as well at the moment – I think President (Emmanuel) Macron and Prime Minister (Justin) Trudeau are, for example.’

Despite him being seen as pro-business when he championed financial services as London mayor, Mr Johnson’s record has been clouded by his widely reported dismissal of companies’ concerns about Britain’s exit from the EU.

By joining LinkedIn and its 700 million users worldwide, the PM is opening another route to bypassing traditional media outlets that have been sharply critical of his sometimes rocky, year-old administration, replete with U-turns on key policies including those dealing with the coronavirus outbreak.

Mr Johnson has already used Facebook to broadcast question and answer sessions with the public, and plans to televise daily briefing with reporters later this year.

This week the Government will launch a campaign to encourage employees back to the workplace after the coronavirus-enforced lockdown, seeking to prevent further damage to businesses in city centres that rely on passing trade.

Today the PM warned there is going to be ‘more of this wretched Covid still to come’ as he convened his Cabinet and told ministers ‘bit by bit’ the UK is ‘getting back on its feet’.

Mr Johnson told his top team that ‘we know there will be more outbreaks’ but he is ‘absolutely confident’ the Government will be able to deal with them.

He also claimed that ‘huge numbers’ of people are now returning to offices and ‘quite right too’ amid fears that Professor Chris Whitty could quit over the Government’s push to persuade workers to ditch working from home.

Mr Johnson met with his Cabinet in the grand Locarno Suite at the Foreign Office – chosen because it has more space than Number 10 so that ministers can socially distance.

The opulent setting will be used for the meetings for the foreseeable future after months of Mr Johnson having to speak to ministers via Zoom.

The Prime Minister will be hoping that the meeting, which came on the morning that Parliament returned from its summer break and as thousands of pupils finally returned to schools across England, will set an example to workers across the nation.

Mr Johnson is encouraging employees to head back to their offices but it was claimed today that ministers are holding back on the drive because of fears the Chief Medical Officer could resign.

Prof Whitty is said to be hampering the Government’s efforts to get more workers back to their normal commutes and to physically return to their workplaces.

Cabinet sources told The Telegraph ministers are afraid that if they push too hard on the issue, resulting in a wave of staff returning to town and city centres, then Prof Whitty could opt to resign because of safety fears.

Such a move would likely cause massive damage to public trust in the Government. 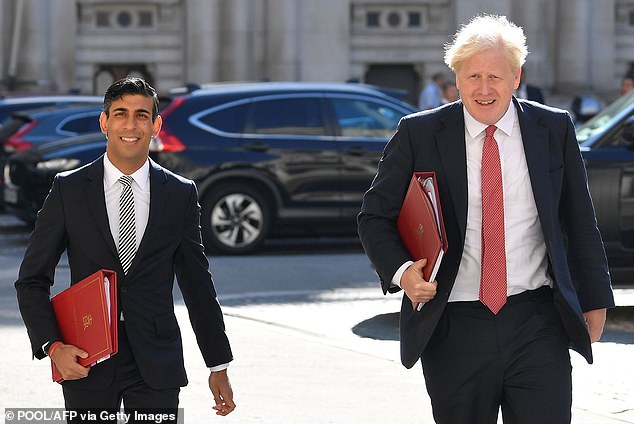 On Twitter, Mr Johnson (pictured with Rishi Sunak) said: ‘Throughout the pandemic, so many businesses have done amazing work to support their staff and their community’

Friday March 27: The  Prime Minister used a video released on Twitter to reveal that he had tested positive for the coronavirus. He was said to be experiencing ‘mild symptoms’ and insisted he would continue to work from a specially sectioned-off part of 11 Downing Street, where he lives.

Thursday April 2: By this time, doubts have begun to appear about the prime Minister’s health. At a regular briefing for reporters that morning his official spokesman confirmed that we was still suffering from a high temperature and was unable to confirm whether Mr Johnson would be leaving quarantine as planned the following day.

Friday April 3:  Mr Johnson uses a video message on social media to confirm that he will not be exiting self-isolation, because he continues to have a high temperature. ‘Although I’m feeling better, and I’ve done my seven days of isolation, alas I still have one of the symptoms, a minor symptom – I still have a temperature,’ he revealed.

Saturday April 4:  Mr Johnson’s pregnant fiancee Carrie Symonds reveals she has been self isolating for a week at the couple’s home in south London. Ms Symonds, 32, posted on Twitter: ‘I’ve spent the past week in bed with the main symptoms of Coronavirus. I haven’t needed to be tested and, after seven days of rest, I feel stronger and I’m on the mend.’

Sunday April 5: In a short press release late on Sunday night, hours after Matt Hancock had told the nation that the Prime Minister was ‘OK’, Downing Street revealed he had been admitted to hospital ‘for tests’. ‘This is a precautionary step, as the Prime Minister continues to have persistent symptoms of coronavirus ten days after testing positive for the virus,’a  spokesman said.

Monday April 6:  In another short press statement No 10 reveals that the Prime Minister has been moved to intensive care at St Thomas’ Hospital in London, 11 days after testing positive. Hours earlier he had tweeted he was in ‘good spirits’. ‘Over the course of this afternoon, the condition of the Prime Minister has worsened and, on the advice of his medical team, he has been moved to the Intensive Care Unit at the hospital,’ a spokeswoman said.

Tuesday April 7:  The Queen sends a message to Mr Johnson’s fiancee Carrie Symonds and the Prime Minister’s family, saying her thoughts are with them and that she wishes him a full and speedy recovery. The Duke of Cambridge also tweeted a personal message, signing it off with his initial ‘W’, and saying: ‘Our thoughts are with the Prime Minister and his family, who like so many in the UK and around the world are affected by coronavirus. ‘We wish him a speedy recovery at this difficult time. W.’

Thursday April 9: Mr Johnson comes out of intensive care after three nights. The announcement that the PM had been moved to a ward came just hours after Dominic Raab, who has been standing in for him while he was incapacitated, said he was making ‘positive steps forward’ in his treatment.

Sunday April 12: The Prime Minister thanked the NHS for saving his live and the public for their own ‘sacrifice’ as he was reunited with Miss Symonds following his discharge from hospital. He stopped on his way to recuperate at Chequers in Buckinghamshire to record a message to the nation in Downing Street. The couple – and their dog Dilyn – were seen together in the back of an official government car and in scenes which may raise some eyebrows neither they nor the driver or bodyguard were wearing masks.

Monday April 27: Mr Johnson returned to work at Downing Street. In a statement in Downing Street, the PM said he was back in charge after weeks recuperating from a serious scare with the killer disease, and urged people to be ‘patient’ as it was not yet the time to ‘go easy’ on social distancing rules. But Mr Johnson channeled Churchill’s famous speech about the ‘end of the beginning’ by saying there are ‘real signs’ the UK is making ‘progress’.