Boris wins a vote at last! 36ft effigy of Boris Johnson is picked to be celebrity guy at annual Edenbridge bonfire joining the likes of Wayne Rooney and Donald Trump

Boris Johnson has finally won a vote – to be the celebrity Guy which will be burnt on Bonfire Night.

Edenbridge Bonfire Society in Kent said the ‘blundering’ ex Foreign Secretary was the popular choice to go up in flames at this weekend’s festival.

He follows in the footsteps of footballer Wayne Rooney, US President Donald Trump,  and Hollywood producer and alleged sex pest Harvey Weinstein in going up in flames.

The society unveiled their 36ft effigy of the Brexiteer, who is wearing his signature Hawaiian running shorts, cycling helmet and taking a bite out of an EU cake.

They said the Tory MP’s ‘blundering’ style and ‘never ending gaffes’ made him the top choice to be hurled on the bonfire. 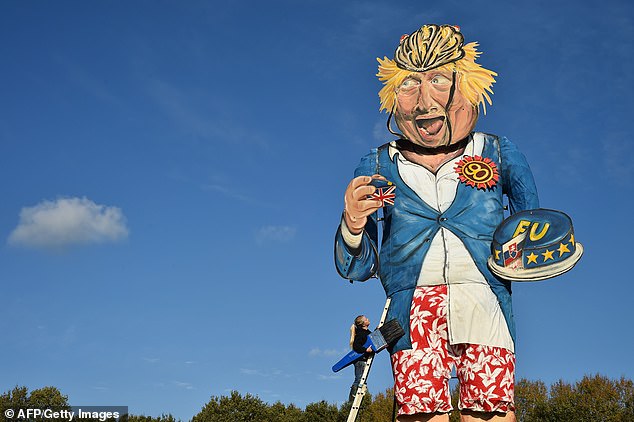 Edenbridge Bonfire Society in Kent said they the ‘blundering’ ex Foreign Secretary was the popular choice to go up in flames at this weekend’s festival (pictured, the giant effigy of Boris Johnson) 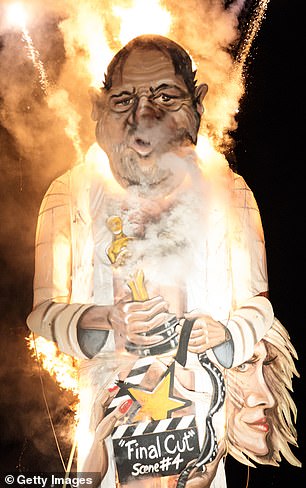 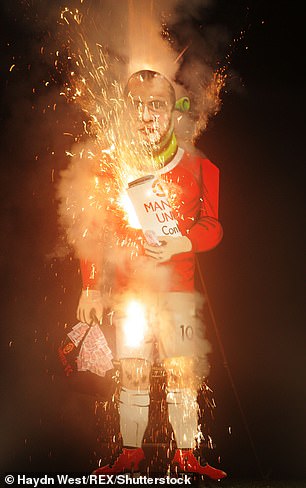 The ex Cabinet minister  follows in the footsteps of footballer Wayne Rooney (pictured right) and Hollywood producer and alleged sex pest Harvey Weinstein (pictured left) in having the dubious honour of being chosen to go up in flames.

Boris Johnson is well known for sporting his signature Hawaiian shorts to go running in (pictured, left in February 2017, and right, in October 2017)

Society chairman Bill Cummings said: ‘Our message to Mr Johnson is that you cannot have your cake and eat it.

‘We hope Mr Johnson will appreciate the humour contained in our caricature and take it in the good spirit with which it is intended.’

It takes its name from Guy Fawkes – the ringleader of the Catholic plot designed to assassinate the Protestant King James I and replace him with a Catholic.

The plot failed, the conspirators were discovered and they were all hanged, drawn and quartered.

Londoners celebrated James I surviving the murder attempt by lighting bonfires around the city, and within months Guy Fawkes Night was established.

It has been celebrated each year ever since, with communities marking it with fireworks and lighting bonfires which they burn a Guy on.

Many local societies now pick public figures to be celebrity guys which they burn on giant fires.

Politicians are often selected for the dubious honour.

Donald Trump, Cherie Blair and Nigel Farage have all been burnt at public Bonfire ceremonies in recent years.

Artist Andrea Deans, who painted the creation, said: ‘As with last year, there were many strong contenders for this year’s celebrity Guy, particularly in the political world.

‘This year Boris was the obvious option, plus he’s great to caricature and I’ve wanted to paint him for a long time.’

Every year the Kent society picks an infamous public figure to poke fun at during its celebrations, this year being held on Saturday.

The 36ft effigy will go up in flames alongside a traditional figure of Guy Fawkes.

The giant replica is wearing shoes depicting the famous Brexit referendum campaign bus which promised voters that the £350million they would not longer be sending to the EU could be spent on the NHS instead.

The campaign pledge was highly controversial and sparked a backlash among Remainers who said it was disingenuous.

He is holding a cake decorated in the style of the EU flag, from which he has taken a Union flag-coloured slice.

He is also wearing a rosette symbolising 90 years since the society was founded.

Last year Hollywood film producer Harvey Weinstein was the standout pick after a string of allegations of sexual assault on female employees and movie stars emerged.

In 2016 Donald Trump was the ‘overwhelming choice’ for the steel-framed model, made days before the then Republican US presidential candidate went head-to-head with Democrat Hillary Clinton and won the election.

In 2015 a model of scandal-hit former Fifa president Sepp Blatter was burned. 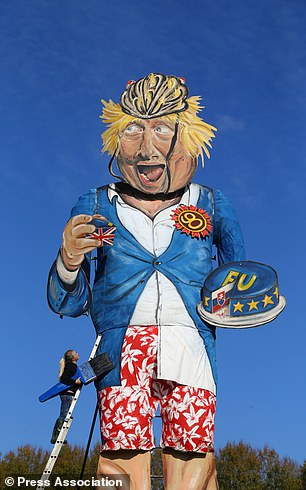 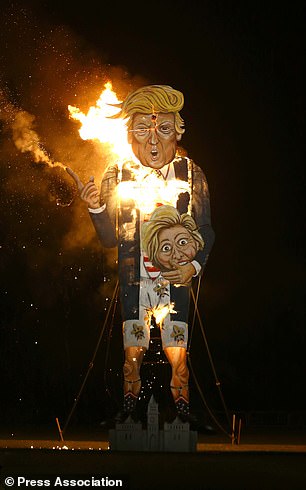 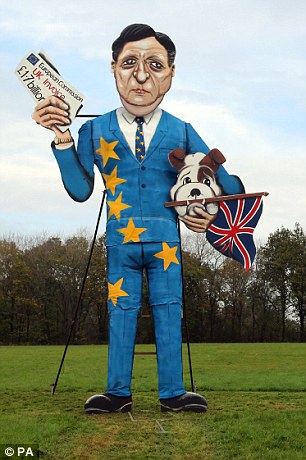 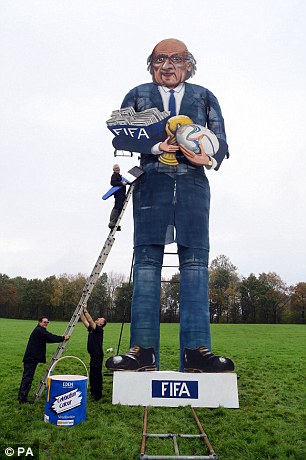 Jose Manuel Barroso, the exiting President of the European Commission was unveiled as the Celebrity Guy in 20014 (pictured left) while disgraced Fifa boss Sepp Blatter, was chosen in 2015 (pictured right)

More than 10,000 people attend the annual event, with families visiting from London, Surrey, Sussex and Kent.

Organised by a team of volunteers and raising money for charity, the evening begins at 6.30pm with a torch-lit carnival procession through Edenbridge High Street.

This is led by the Bishop of the Bonfire, his choirboys and the society’s effigies as well as visiting societies from Sussex.

The evening ends with a firework display before the effigies are burnt.

The society has been poking fun at the famous and infamous for more than 20 years.

The identity of the effigy is picked a week before the event and is usually decided based on who is the most prominent figure in the news at the time.

Constructing the frame and decorating it with emulsion paint takes four to five days.