Student loan borrowers could soon begin applying to have up to $20,000 in loans forgiven despite uncertainty over the future of the Biden administration's controversial debt relief plan.

At least four lawsuits opposing the plan have emerged in recent weeks, though President Biden has appeared willing to put up a fight, saying recently: "Bring it on."

While experts disagree on the merits of the cases, they do agree on one thing; borrowers who apply for forgiveness first could have an advantage. “You want to apply as quickly as you can, on the first day it comes out even,” financial aid expert Mark Kantrowitz told Yahoo Finance.

The Biden administration drew the ire of many Republicans, and even some of his own allies, when he announced his debt forgiveness plan in August. That plan would forgive $10,000 of debt for people making less than $125,000 and an additional $10,000 for those who received Pell Grants. Some critics argue the plan doesn't address the root problems that make college so expensive, while others claim the plan overstepped the executive branch's Constitutional authority.

While some of these arguments might win in court, if borrowers can get their application through before a court hands down its decision, experts say, it's likely that forgiveness will stick.

“If someone gets cancellation, I think it would be an extraordinary remedy to undo that," Persis Yu of the Student Borrower Protection Center told Yahoo Finance.

This is contingent on the application process getting underway. Lawyers for the program's opponents are searching for a judge who would freeze the program in place while the case plays out. So far, no judge has issued a temporary restraining order that would halt the forgiveness program.

‘If it reaches the U.S. Supreme Court, the Biden administration is going to lose’

The Biden administration is trying to dismiss the lawsuits, in what is essentially a game of "legal Whac-A-Mole," according to the Committee for a Responsible Federal Budget’s Marc Goldwein.

And if the litigation proceeds? "There's a good chance courts are going to look at this and say, the president overstepped his authority, spending is really the authority of the Congress,” Goldwein said.

Kantrowitz predicted: “If it reaches the U.S. Supreme Court, the Biden administration is going to lose.”

But before then, opponents have to show they have standing, meaning the forgiveness plan would hurt them. All three of the active suits — one out of Indiana, another from Arizona, and a fourth from six state attorneys general — wrestle with the standing problem and have used a variety of legal arguments to make their case. The Arizona attorney general’s lawsuit, for example, says he is hurt by forgiveness because his office relies on student loan repayment assistant programs to recruit staff.

A fourth case — brought in Wisconsin — was recently tossed out over the standing issue.

If the states can't establish standing, the merits of these respective cases don’t matter. As such, the Biden administration has been adapting the program in real-time to try to get the lawsuits tossed right away. 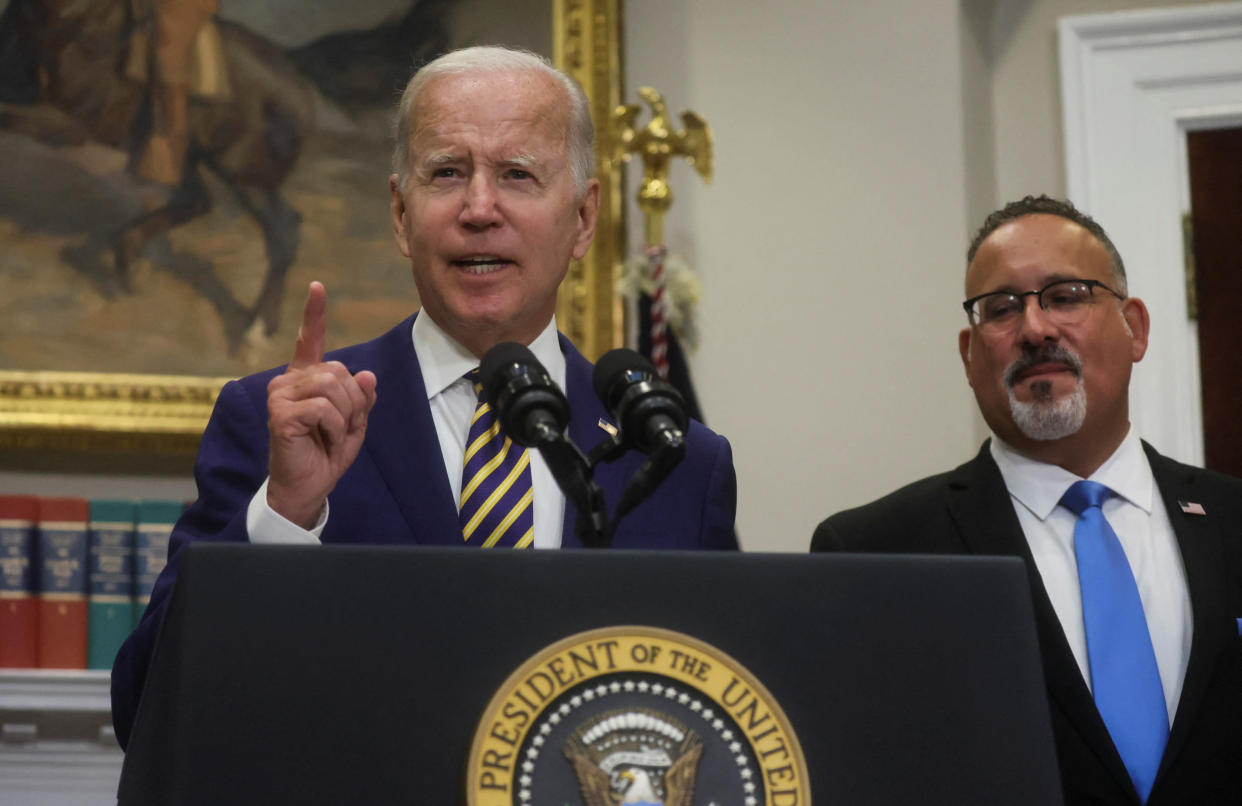 In one recent example, the coalition of attorneys general argued that they have standing because allowing borrowers to consolidate loans would hurt state loan agencies. The Department of Education quickly responded with new restrictions on consolidations apparently designed to undercut that argument.

“We want to make the process simple, clear and we want to make sure that the user experience is a positive one,” Secretary of Education Miguel Cardona recently told Yahoo Finance, saying his agency is working on a website to make applying as easy as possible.

If all goes as planned from the administration’s perspective, Cardona’s agency will approve applications on a rolling basis and then send the information to loan servicers for execution within a matter of weeks.

A wide range of possible outcomes

In addition to the current lawsuits, more could be coming once the program is formally announced.

Kantrowitz says the legal challengers might have a case if they can resolve the question of standing. He notes that this is a new spending program — estimated by the Congressional Budget Office to cost $400 billion — and that it's not clear the law gives the executive branch to forgive student debt.

Yu disagrees, telling Yahoo Finance that he believes borrowers will ultimately have their debt canceled. “The administration did its homework [and] there is solid legal ground for the policy and for the announcement," he said.

If the cases do end up proceeding, the Supreme Court could hear arguments soon, so borrowers might have a small window to get their forgiveness approved and processed before then.

Ben Werschkul is a Washington correspondent for Yahoo Finance.

Read the latest financial and business news from Yahoo Finance