President Joe Biden is launching a new Defense Department task force on China that will take an overall look at the growing military and strategic rival of the U.S. – putting in place a scheme that could lead to a new national military posture.

He announced the move at the Pentagon – a signal to Beijing that the look will overarching and will include military and not just economic components of the U.S. posture.

The reexamination comes after four years of clashes with Beijing over economic policy and a trade war that featured tariffs and counter-tariffs.

The task force will look at intelligence, technology as well as the U.S. the military footprint in the region.

It will include representatives of the joint staff and combatant commands as well as the intelligence community, a reflection of the areas upon which it will focus.

It will consist of 15 people, and will be tasked with presenting its findings in four months. 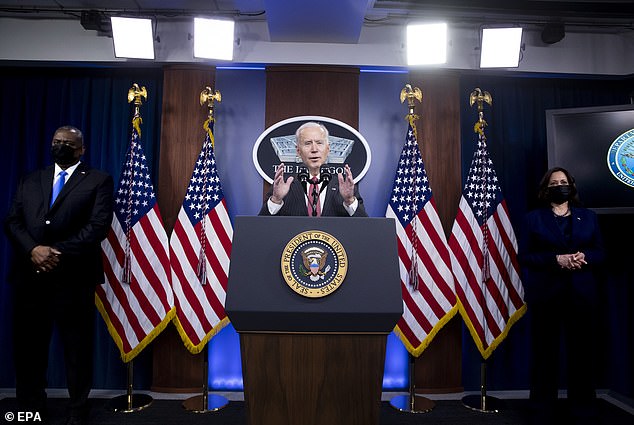 Move on China: Joe Biden announced a Pentagon review of the military’s approach to China at the Pentagon 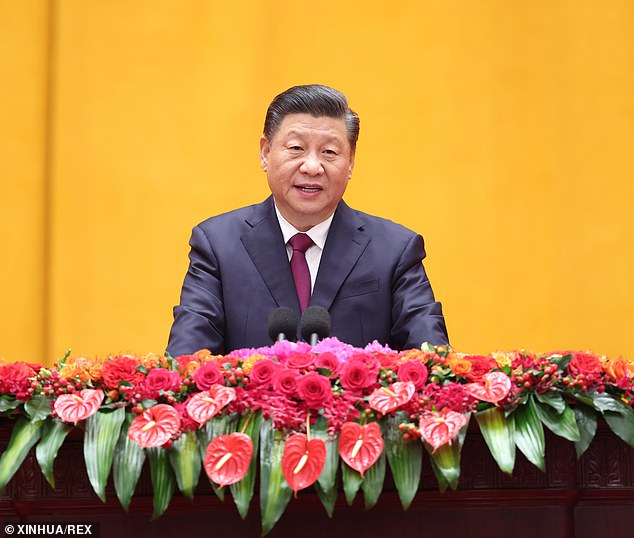 Rival: Joe Biden said of Xi Jinping’s CHina: ‘We need to meet the growing challenges posed by China to keep the peace and defend our interest in the Indo-Pacific and globally.’

Speaking at the Pentagon for the first time as president along with new Defense Secretary Lloyd Austin, Biden called for the U.S. to lead a new era of competition ‘from the deep sea to outer space’ – two areas where China is on the move.

‘And we need to meet the growing challenges posed by China to keep the peace and defend our interest in the Indo-Pacific and globally,’ Biden said.

‘Today I was briefed on a new DOD-wide China Task Force and Secretary Austin is standing up to look at our strategy and operational concepts, technology and force posture and so much more.

‘The task force will work quickly, drawing on civilian and military experts across the department to provide within the next few months recommendations to Secretary Austin on key priorities and decision points, so that we can chart a strong path forward on China related matters.

‘It will require a whole government effort, bipartisan cooperation in Congress, and strong alliances and partnerships. That’s how we’ll meet the China challenge and ensure the American people win the competition in the future.’

The moves comes days after Biden issued his most extensive public comments on China of his presidency in an interview with CBS where he cast China as a competitor.

He also spoke of his experience meeting with the Chinese leader numerous times.

‘He’s very bright,’ Biden said of Xi. ‘He’s very tough. He doesn’t have – and I don’t mean it as a criticism, just the reality, he doesn’t have a democratic, small-D, bone in his body. But … the question is, I’ve said to him all along, that we need not have a conflict.’

China for decades has been considered a growing rival to the U.S., and its own leaders have designed elaborate strategies to carve out influence in the developing world; expand Chinese territorial claims; exert more control of special territories like Hong Kong; and continue its gains as a global military and economic power.

The Barack Obama administration also had to manage tensions with China, hosting Xi at the White House, while also using military and diplomatic efforts to push back Chinese assertions of territorial dominance in the region.

The task force will be chaired by Special Assistant to the Secretary of Defense Dr. Ely Ratner.

It will also examine the areas of strategy, force structure, the posture of U.S. forces, U.S. alliances, and defense relations with China.

Currently two U.S. carrier groups conducted joint exercises in the South China Sea on Tuesday, days after a U.S. warship sailed near Chinese-controlled islands in the disputed waters, as China denounced the United States for damaging peace and stability. 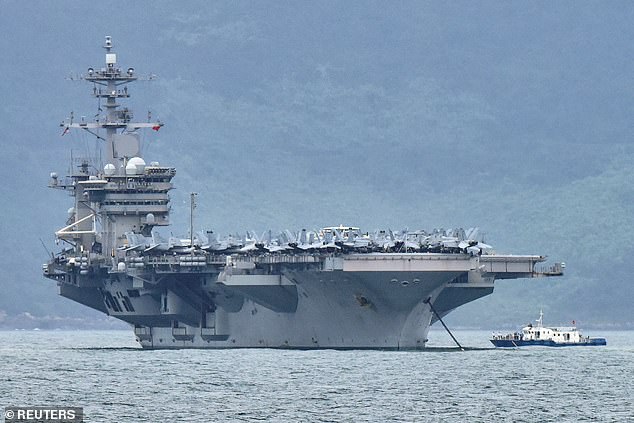 Strike group: The Theodore Roosevelt, seen in Da Nang, Vietnam, last year, carried out a rare joint exercise with her own strike group and that of the Nimitz close to Chinese waters 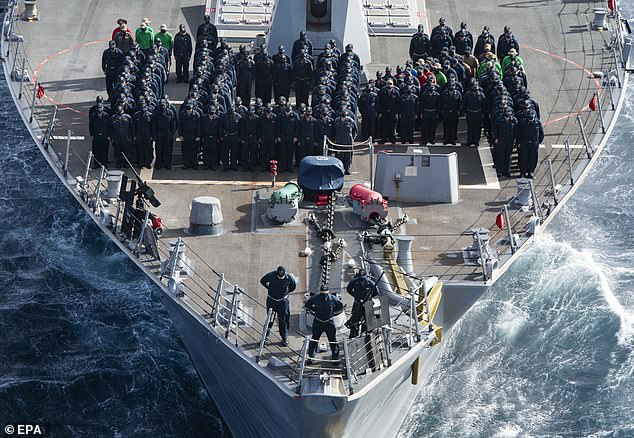 Show of strength: The USS Sterett is part of the Nimitz Strike Group deployed to joint exercises with the Theodore Roosevelt Strike Group in the South China Sea

The Theodore Roosevelt Carrier Strike Group and the Nimitz Carrier Strike Group ‘conducted a multitude of exercises aimed at increasing interoperability between assets as well as command and control capabilities,’ the U.S. Navy said, marking the first dual carrier operations in the busy waterway since July 2020.

In Beijing, Chinese Foreign Ministry spokesman Wang Wenbin said the frequent moves by U.S. warships and aircraft into the South China Sea in a ‘show of force’ was not conducive to regional peace and stability.

The exercise comes days after China condemned the sailing of the destroyer, the USS John S. McCain, near the Chinese-controlled Paracel Islands in what the United States calls a freedom of navigation operation – the first such mission by the U.S. navy since President Joe Biden took office.

Last month, the U.S. military said Chinese military flights over the South China Sea fit a pattern of destabilizing and aggressive behavior but posed no threat to a U.S. Navy aircraft carrier strike group in the region.

The United States has contested China’s extensive territorial claims in the region, accusing it of militarizing the South China Sea and trying to intimidate neighbors such as Malaysia, the Philippines and Vietnam, who have claims that overlap with China’s in the resource-rich area.

‘We are committed to ensuring the lawful use of the sea that all nations enjoy under international law,’ Rear Admiral Jim Kirk, commander of the Nimitz Carrier Strike Group, said in a statement.

China has been infuriated by repeated U.S. sailings near the islands it occupies and controls in the South China Sea. China says it has irrefutable sovereignty and has accused the United States of deliberately stoking tension.

China has also been angered by U.S. warships sailing through the Taiwan Strait, including one last week, also the first such operation under the Biden administration.

‘This demonstrates the clear U.S. attitude towards challenges to the security status quo in the Indo-Pacific region,’ she said.