Washington: The Biden administration is set to announce a string of long-awaited measures against Russia, including far-reaching financial sanctions, for the hacking of government and private networks and a range of other activities.

The sanctions will be among what President Joe Biden’s aides say are “seen and unseen” steps in response to several affronts: the hacking, known as SolarWinds; the CIA’s assessment that Russia offered to pay bounties to militants in Afghanistan to kill American troops; and Russia’s years-long effort to interfere in United States elections, according to American officials and others who have been briefed on the actions but are not permitted to speak on the record.

The moves will include the expulsion of a limited number of diplomats, much like the Obama administration did in response to the Russian efforts to influence the election five years ago. But it is unclear whether these actions will prove sufficient to deter Russia from further hacking, influence operations or efforts to threaten European countries. 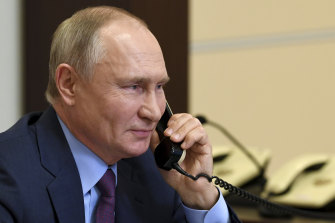 US President Joe Biden has rung Russian President Vladimir Putin to warn him he faced consequences for Russia’s aggression on Ukraine border. Credit:AP

The sanctions are meant to cut deeper than previous efforts to punish Russia for interfering in elections, targeting the country’s sovereign debt, according to people briefed on the matter. Administration officials were determined to draft a response that would impose real costs on Moscow, as many previous rounds of sanctions have been shrugged off.

“It will not simply be sanctions,” Jake Sullivan, the president’s national security adviser, said in February. He has frequently said it will include “a mix of tools seen and unseen,” though there have been disagreements in the administration about how many of the steps to make public.

Restrictions on sovereign debt affect a nation’s ability to raise dollar-denominated bonds, with lenders fearful of being cut off from American financial markets. The United States has used similar techniques against Iran, among others.

Russian bond prices have fluctuated in recent weeks in anticipation of possible sanctions. Russia has relatively little debt, making it potentially less vulnerable to the tactic. And rising oil prices will benefit the country’s economy.

Nevertheless, any broad sanctions on Russia’s financial sector would amount to a significant escalation in the costs that the United States has been willing to impose on Moscow. And part of the administration’s concern has been whether Russian entities could retaliate by exploiting “back doors” implanted in American systems.

Officials have acknowledged that they do not know if the SolarWinds hacking — in which Russian hackers gained access to network management software used by thousands of government entities and private firms — opened routes for revenge.

On Tuesday (Wednesday AEST), Biden spoke with Russian President Vladimir Putin, warning him about the Russian troop buildup on Ukraine’s border and in Crimea. Jen Psaki, the White House press secretary, said the call was meant to emphasise the consequences of Russia’s activities, but it was unclear if Biden telegraphed any of his administration’s pending moves.

The Biden administration has already carried out one round of sanctions against Russia, for the poisoning of opposition leader Alexei Navalny.

While Biden administration officials were for a while considering taking action only in response to the hacking, they decided to join that move with retaliations for other Russian actions, according to officials. Additionally, penalties coordinated with allies for Russia’s increased threat to Ukraine were expected, said one person familiar with the announcement.

The CIA presented the Trump administration with an intelligence assessment that Russia had covertly offered to pay bounties to militant fighters to kill more Americans in Afghanistan. But while the National Security Council at the Trump White House initially led an inter-agency effort to come up with response options, months passed and the White House did not authorise anything — not even delivering a diplomatic warning, the mildest option.

After the existence of the CIA assessment and the White House’s inaction on it became public, there was bipartisan outrage in Congress. As a candidate, Biden raised the issue of the suspected bounties, and once in office, he ordered his intelligence officials to put together a full report on Russian efforts against Americans.

While the Biden administration has not released any new information on the suspected bounties, it did make public a report on Russian election interference. That report said that Putin had authorised extensive efforts to hurt Biden’s candidacy during the 2020 election, including by mounting covert operations to influence people close to President Donald Trump.

The report also found that Russia did not try to hack voting systems or change the tallies, but it did work to change public perceptions.

The broad hacking by Russia’s foreign intelligence agency, was discovered in December by the private firm FireEye, but the hacking had gone on for months, penetrating nine federal agencies and stealing emails of senior officials and other information.

The Russian hacking exploited a vulnerability in a commonly used piece of software. By corrupting that software, Russian agents created vulnerabilities in thousands of computers around the world.

The unseen measures against Russia, including cyberoperations against the intelligence agents who conducted the SolarWinds hacking, are not expected to be made public. Still, officials will announce efforts to conduct expanded cyberexercises with allies, efforts aimed at improving partners’ abilities to detect and respond to Russian intrusions.

The United States and its allies are also increasingly worried about the Russian troop buildup near Ukraine. CIA Director William J. Burns warned the Senate on Wednesday that the buildup included enough forces for a possible incursion.

But Burns said officials were not clear on if Russia was trying to send a signal or prepare for military action.