Britain is mounting a charm offensive to unlock German resistance to sending hundreds of tanks to Ukraine.

Defence Secretary Ben Wallace will meet German officials tomorrow morning to try to persuade them to let Nato states send Leopard 2s to the front lines of the war against Russia.

Despite intense pressure, Berlin has stubbornly refused to let countries that use the German-made tanks donate them to Kyiv.

Even the UK’s pledge to donate 14 Challenger 2 tanks has not convinced the Germans to budge. 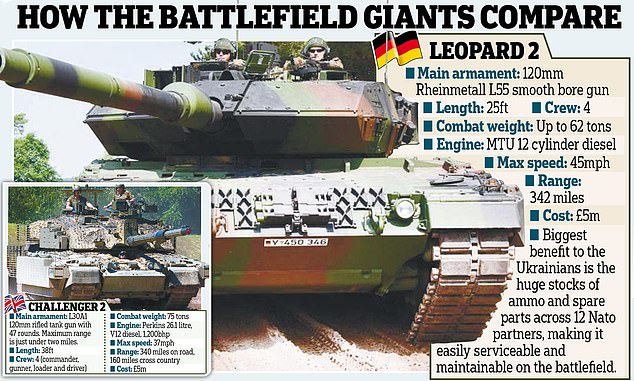 Fractures appeared in the Nato alliance today as Poland threatened to donate its Leopards without Berlin’s approval.

The issue will top the agenda when defence ministers, including Mr Wallace, meet at the Ramstein US military base near Kaiserslautern tomorrow.

While Germany has donated more than £2billion in military aid, including highly effective HIMARS rocket systems, it has refused to send tanks. It has also stuck to licensing agreements that require its approval before German-made tanks can be leased to a third country.

Nato states have 2,000 Leopards, all using the same ammunition, spare parts and maintenance. 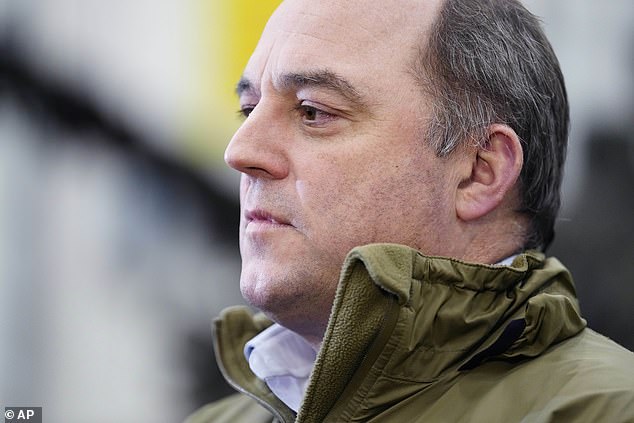 While in Estonia today, Mr Wallace said: ‘We need to put Ukraine in a position to expel Russia. This requires a critical mass of armour’. Pictured: Defence Secretary at Tapa Military Camp, in Estonia

Such a scale of usage makes it the most practical option for Ukraine, which says it requires an additional 300 main battle tanks to support its spring offensive. The success or failure of this operation could determine the outcome of the war, according to military experts.

On a visit to British Challenger crews in Estonia today, Mr Wallace said: ‘We need to put Ukraine in a position to expel Russia. This requires a critical mass of armour.

‘Hopefully we will get to a place where enough tanks are going in.

‘Last year was about defending Ukraine, this year is about pushing back the Russians. Germany has already put some very spikey pieces of equipment into Ukraine – its HIMARS precision rockets can strike targets from 40 miles. So there is no shortage of commitment or solidarity. Our provision of Challenger 2 tanks proves the glass ceiling can be broken.’

Asked if he was confident of persuading Germany to release the Leopards, he added: ‘Let’s see what happens at Ramstein.’ 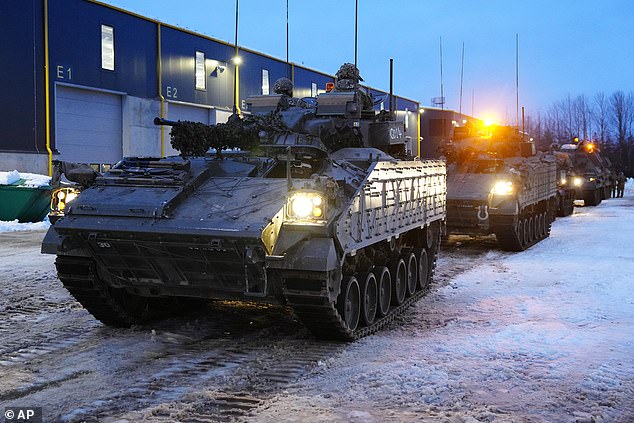 The UK is also to send 600 more Brimstone missiles to Ukraine, the Ministry of Defence confirmed today. It will also dispatch AS-90 heavy artillery weapons and hundreds of armoured vehicles

Today at least one country put in a formal request to Berlin for permission to send Leopards to Ukraine.

It remained unclear whether this was Poland but its prime minister, Mateusz Morawiecki, dropped a potential hint, saying: ‘Consent is of secondary important here.’

The UK is also to send 600 more Brimstone missiles to Ukraine, the Ministry of Defence confirmed today. It will also dispatch AS-90 heavy artillery weapons and hundreds of armoured vehicles.

The latest package includes another 100,000 artillery rounds and drones valued at £20million. Britain has provided £2.3billion of military aid.

Speaking at the Tapa military base near Tallinn in Estonia today, Major Mark Lambert dismissed concerns that the Challenger was not the right option for Kyiv. The King’s Royal Hussars officer said: ‘It is heavier than the Leopard 2 because it is built to be sturdier and more robust. It is proven in battle, packs a punch and can take punches with its Chobham armour. It was also designed for battles against Russian tanks.’