A former Australian ambassador to Beijing believes China is presenting itself as a responsible major power by making fresh diplomatic overtures to Australia and resisting the temptation to take political advantage of US President Donald Trump's coronavirus diagnosis.

On the eve of high-profile "Quad" security meetings between Australia, the US, India and Japan in Tokyo, Geoff Raby, ambassador from 2007 to 2011, said Beijing was stepping back from pressuring American allies as the US heads towards an election and it seeks to cool diplomatic tensions on multiple fronts. 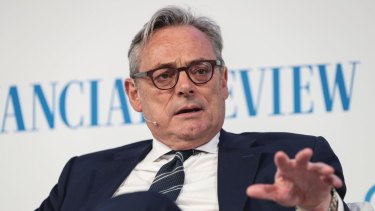 "China wants a world where the Chinese Communist Party's role is unchallenged and uncriticised," he said. "Confrontation is a useful instrument for the Chinese [government] up to a point, but then stepping back and being conciliatory is also part of the strategy."

Fu Ying, China’s former ambassador to Australia, called for an end to "confrontation and abusive language" on Monday. Her comments were the second overture to Australian officials in as many months after Deputy Head of Mission Wang Xining said in August the two countries should not let "a cold, hard mind cast a shadow over our partnership".

China hit Australia with multiple trade strikes this year after Australia led calls for an independent inquiry into the pandemic's origins and raised concerns about the crackdown in Hong Kong, incursions in the South China Sea and treatment of Uighur Muslims in Xinjiang. It also spearheaded restrictions on Chinese telecommunications giant Huawei. 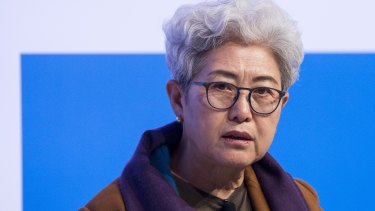 Fu Ying: “Both countries need to show their sincerity and courage to get out of the current dilemma.” Credit:Getty Images

Fu told The Australian Financial Review on Monday that "both countries need to show their sincerity and courage to get out of the current dilemma".

Raby said taken together, the Wang and Fu statements were a signal to Canberra that Beijing wanted to reassess the relationship.

"I would say we should respond accordingly," said Raby, who runs a business advisory firm in Beijing. "Others would say this is a perfectly satisfactory situation and there is no reason to walk back." 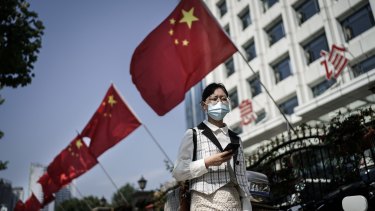 Australia and China’s relationship was already under strain before the coronavirus pandemic. Credit:Getty Images

Prime Minister Scott Morrison has pushed for a policy of "strategic patience" on China and said that the relationship was "mutually beneficial". He has maintained that Australia would not be intimidated over what it sees as core issues of national security and sovereignty.

The government is attempting to negotiate a new landing pad in the relationship where it can express concerns about issues such as human rights without unleashing economic consequences.

Raby said he thought China was using restraint in its response to Trump's diagnosis as it looked to reset the diplomatic playing field in 2021 and give it flexibility to respond to a Biden presidency in which multilateral institutions are expected to play a more prominent role.

"In terms of diplomatic behaviour it's exemplary," he said.

President Xi Jinping wished Trump a "fast recovery" on Saturday and Chinese state media has largely resisted attacks on the US President's role in not curbing the spread of the virus which has killed more than 210,000 Americans, compared to fewer than 5000 Chinese deaths.

"I think they may be looking now for a period of less tension in their bilateral relations," he said. Raby's book China's Grand Strategy and Australia's Future in the New Global Order will be published in November.

China's Foreign Ministry spokeswoman Hua Chunying said she was saddened to learn that Trump and first lady Melania Trump had tested positive for the virus.

But she took aim at the US healthcare system and the broader response to the virus as China presents itself as an alternative healthcare model to developing countries.

"Yesterday the US reported over 47,000 COVID-19 cases and 600 deaths. Feeling heartbroken for the ongoing hardship of these patients. Sincerely hope all of them can receive the same 'finest' treatment and care as the President," she wrote on Twitter.

The Quad partners are expected to agree to counter disinformation campaigns by authoritarian states and supplies of critical minerals and technology to reduce their reliance on China.

The Chinese Foreign Ministry has labelled the group an "exclusive clique" that undermines the interests of third parties.