A scorching Saharan heatwave is set to bake the UK this coming week, as the country experiences its hottest days of the year so far. This mini-heatwave will be frustrating for many, as authorities beg people to follow lockdown orders and stay indoors this week. Temperatures could surge to 25C in the UK by Thursday, amid predictions that the country faces its warmest summer on record.

The BBC’s meteorologist Louise Lear said: “It will be a warm day for many, particularly for this time of year.

“We have had clear skies overnight, across the UK and much of Europe. This massive cloud we have here, approaching from the west, will drag in some cloud.

“But, ahead of that, we have this strong southernly wind bringing this warm air all the way up from Spain.

“It is driving that warmth up from the near-continent. A lot of dry weather out there, a lot of sunshine.” 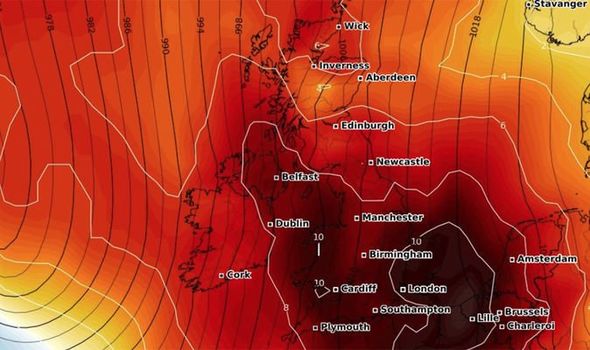 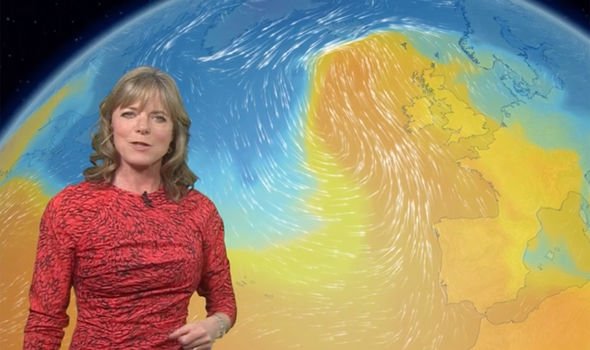 She added: “The winds on exposed coasts could see temperatures fall in those areas, but a warm day for most in the country. Gusts could exceed 40mph this afternoon.

“We could also see small outbreaks of rain in Northern Ireland, the coasts in Scotland. However, London will see temperatures of around 21C, which is around 70F.

“Overnight will be mild, temperature figures still in double digits. It perhaps not be quite as warm on Monday. We could see highs of around mid-teens, which is still higher than expected for this time of year.

“However, once this rain has moved through the country on Monday, the high pressure will continue to build and we keep that dry, settled theme.” 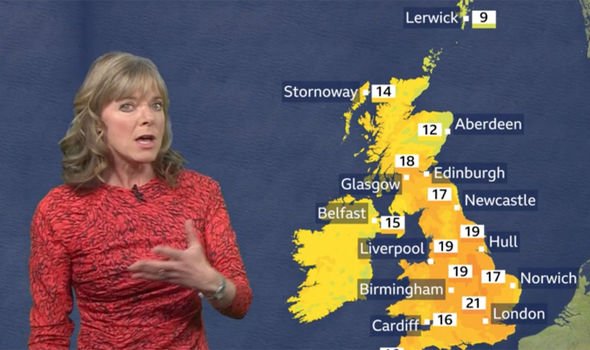 Lear also issued a pollen warning, saying: “There is quite a high pollen count out there. The sunshine will bring that out. You may notice that when you wake up in the morning.”

The Met Office predict pollen levels will peak on Sunday and Monday, with areas like Kent and London worst hit.

Other forecasts show a burst of hot air from Africa could push temperatures as high as 25C in the coming week, which could last for three months. 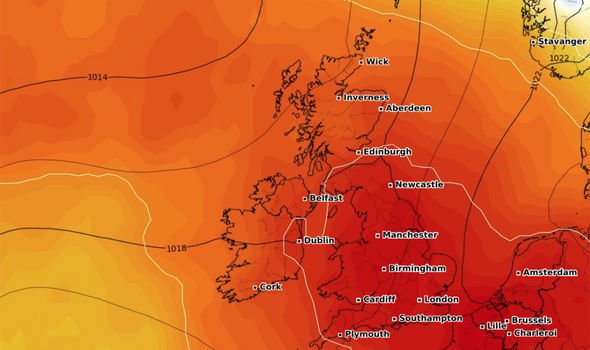 Weather Outlook forecaster Brian Gaze said: “Warm air is coming all the way from the north-west coast of Africa, with good sunny spells during the next week.”

The predicted temperatures are far above the 11C average for April.

However, the warm weather has been a point of concern for the Government and police authorities, who have threatened to crack down on sunbathers who flout the lockdown orders.

Police admit the warm weathers is “one of the biggest challenges” they face during the lockdown.

Police forces have sent out more officers to patrol on the roads, streets, around beauty spots and parks this weekend.

On Saturday, Lambeth Council even announced that it would be shut down Brockwell Park in London after it recorded more than 3,000 visitors.