BBC Weather: Temperatures to 'fall away' as wintry showers hit

Snow has been falling in some parts of the UK overnight and Monday morning as a cold front has pushed south down the country. Monday will see a cold start and patchy showers for some across the country but this will be followed by lots of sunshine. Tuesday will be another frosty night below freezing. But as Wednesday arrives temperatures will climb across the country.

Weather presenter Carol Kirkwood said Sunday night was the coldest night for April since 2013 where Tulloch Bridge in the Scottish Highlands fell to -9.4 and could fall further.

She said: “There is still some snow in the forecast and as we go through this week don’t be surprised if you see a little bit more.”

She added: “As we go through this week it’s going to remain cold, it’ll be frost by night, will be mainly dry, still some wintry showers but equally some sunshine.”

Kirkwood said high pressure is driving our weather this week and the weather front producing the snow is pushing southwards that will bring the wintry showers. 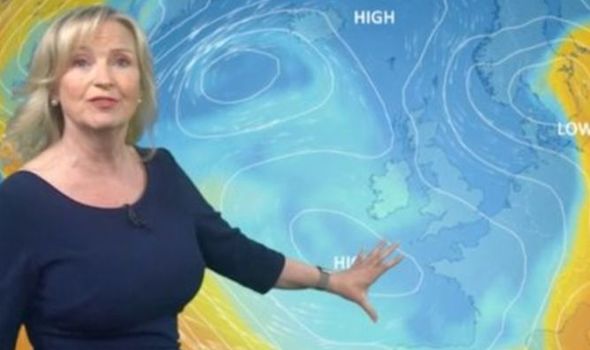 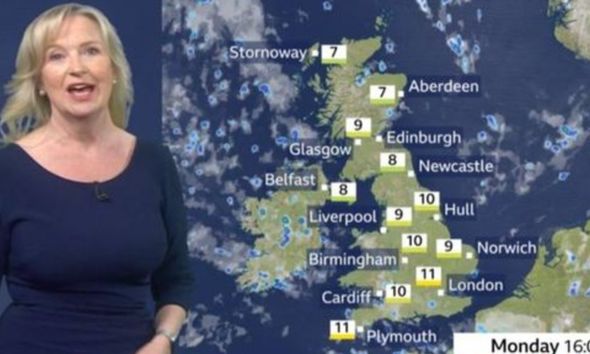 Temperatures on Monday afternoon will be 11 in London, 10 in Cardiff, 9 in Glasgow and 10 in Hull with scattered showers through the course of the afternoon.

Monday night will see much of the U.K. plunge to freezings temperatures and could see North East Scotland get as cold as -5 and -6.

She warned to expect ice on untreated surfaces across the UK.

It will be cold and frosty start for Tuesday but as the country heads through the day temperatures will rise across the country to 12 in London and 11 in Glasgow. 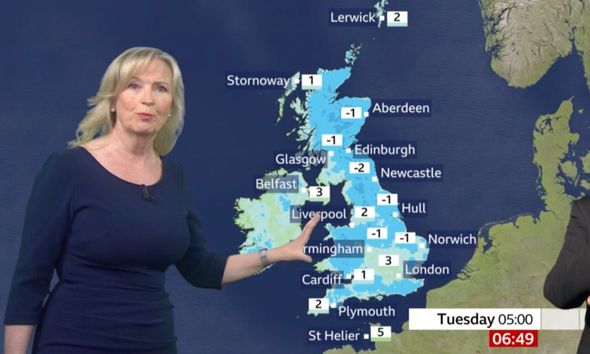 But Kirkwood did warn of “more showers around tomorrow than we are looking at today.”

She said Wednesday will see “another cold start to the day, another frosty one.”

There will be some mist and fog patches around but they should lift “quite quickly” as Wednesday wears on.

Wednesday will be cloudy across the country “but there will still be sunshine having said that” Kirkwood ensured. 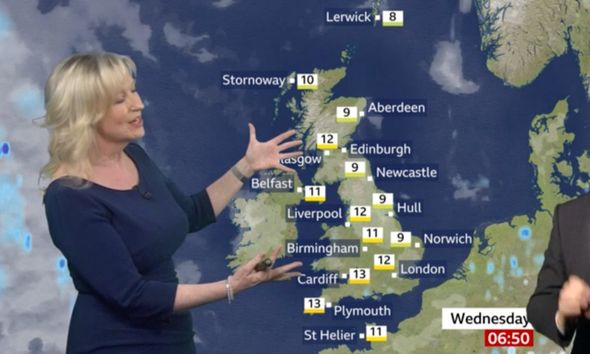 She added: “Temperatures 8 in the North, feeling cooler on the North Sea coastline.”

But there could be showers in the far north.

Kirkwood added: “Temperatures out are closer to average.”

Later on Wednesday will see highs of 12 in London, 13 in Plymouth, 12 in Liverpool and 12 in Glasgow.