Europe is set for lots of sunshine through this week with temperatures rocketing to 25C in Lisbon, Portugal, as a “big area” of high pressure brings settled weather across western parts. Despite milder temperatures for western Europe, it will remain colder in eastern parts as cool air sweeps in from the north. BBC weather presenter Tomasz Schafernaker said: “It’s settling down nicely across western parts of Europe from Spain, Portugal, France, into the UK as well, Benelux, also areas of Germany seeing some partly cloudy skies with some sunshine. But notice that around Scandinavia, the Baltic, Poland and eastern parts of Europe it is a lot colder here. That colder air coming in from the north, cloudy skies, and central Mediterranean quite unsettled there, around Italy, Corsica and Sardinia.

“But the eastern Med as well as Turkey, Greece, the Greek islands, looking absolutely fine on Tuesday. Here’s the rain across Corsica and Sardinia.

“In Spain and Portugal some fabulous weather on the way, in fact in Lisbon 25C with lots of sunshine, and then France and the UK fairly settled.

“At times it will be cloudy in France and Germany here and as a result a little on the cool side. Not much changes across western parts of Europe on Wednesday, there is still a big area of high pressure here, so that means settled weather.”

The BBC weather host continued: “Whereas the Mediterranean across southern parts of Italy and just about into Greece turns very unsettled. 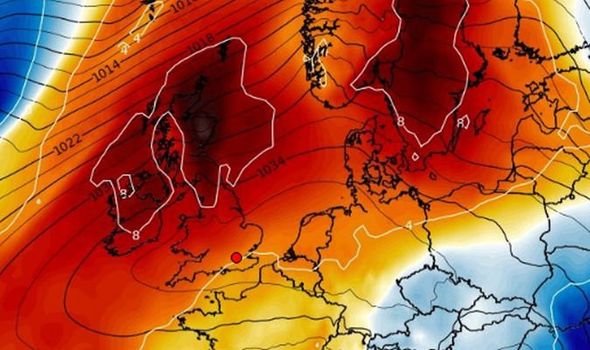 In Spain and Portugal some fabulous weather on the way, in fact in Lisbon 25C with lots of sunshine

“Now a selection of places in the coming days, so if you are heading off to Madrid it is going to stay beautiful right across the course of the weekend.

“Rome is also going to improve, sunshine on the way but not quite so warm here, 16C. Warsaw however cooler, but it looks as though things are going to turn that little bit milder over the weekend.”

Meanwhile for the UK, the Met Office predicts that by Thursday, temperatures will be as high as 18C in many places.

The high temperatures have seen many forecasters believe this spring will be the hottest on record.

Met Office forecaster Becky Mitchell said: “As we head to Wednesday and Thursday we could see temperatures of 17C or 18C.

“Monday will be a dry and bright day for most of us with a chilly start in the countryside.

“There will be one or two showers in Scotland and a few in Northern Ireland. But for many places, it will be a dry and crisp and sunny start.

“During the rest of the day, most will hang on to the fine weather.”