BBC Weather: Highs of 25 degrees forecast for parts of UK

The BBC meteorologist noted some areas would kick off the weekend with a cloud and drizzle, especially across northern England and western Scotland. The weather forecaster however noted conditions will become increasingly more settled through the day with temperatures hitting the high teens and low 20s in most of the UK. Thermometers are set to surge well past the mid-20s on both Saturday and Sunday.

Mr Taylor said: “A little bit grey for many at the moment. Some southern and western areas it’s grey and it’s drizzly, but bear with it – the weekend is on the horizon as is much sunnier weather once again.

“Lots of sunshine developing this weekend, humidity developing after brief dips in northern areas and, for some of you, England and Wales especially, it is going to be a hot Sunday.

“Out there at the moment, we do have a weather front pushing southwards, a couple in fact.

“They’re introducing slightly fresh conditions across the north, where temperatures at the moment are in double figures but it’s in the mid to high teens in southern areas, 17-18C across some eastern parts of England. 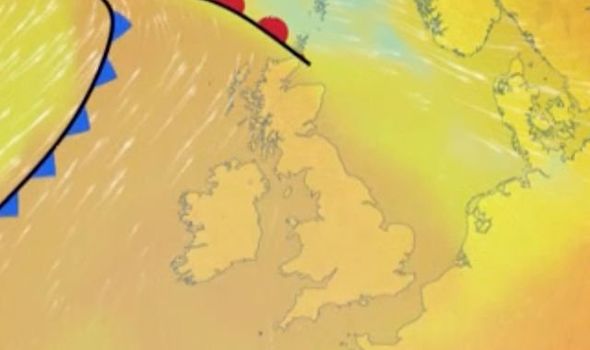 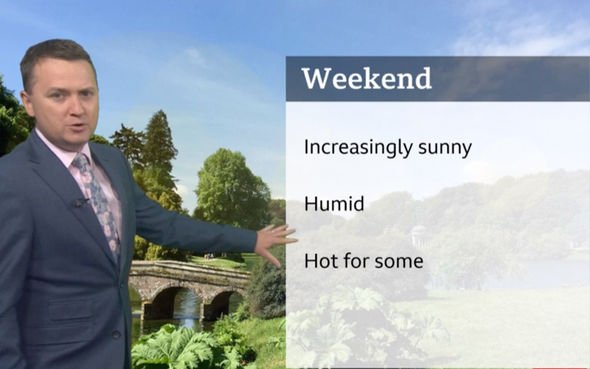 “Plenty of cloud around, drizzle in western Scotland, some too in northwest England now pushing its way south.”

The BBC Weather forecaster continued: “To the south of it we’ll see some sunny breaks develop after a rather grey morning.

“It’s not going to be humid across Scotland, Northern Ireland, northern England. Temperatures slightly down on yesterday, still humid across central, southern parts of England and Wales.

“Cloud amount is going to wax and wane through the evening, there will be some clear skies and a few showers in the very far north of Scotland.” 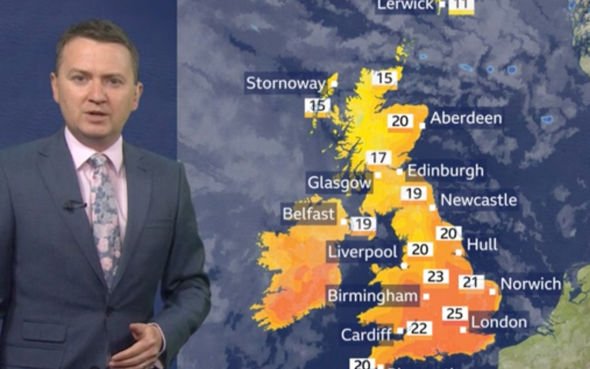 Mr Taylor noted temperatures will keep climbing through Saturday and Sunday, with some southern areas set to hit 29C at the height of the weekend.

The BBC Weather forecaster added: “Not the weekend, an area of high pressure is going to build up and as it does we draw up these amber colors, an indication the hot air is coming back.

“Saturday may be again a bit grey for many of you but the cloud will thin and break.

“One or two showers across Orkney and Shetland but long spells of sunshine for most into the afternoon and temperatures continue to climb. 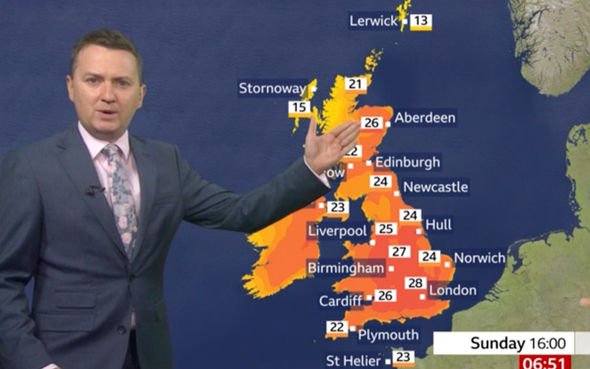 The Met Office added a “very hot spell” could bake the nation during June, before cooler air returns.

The forecast between Tuesday, June 15, and Thursday, June 24, said: “High pressure across the majority of the UK looks set to bring a lot of dry and settled weather at first.