A dramatic drop in temperature over the next 24 hours will see Britain go from its hottest day of the year to snow showers and an Arctic chill. BBC meteorologist Louise Lear told BBC Breakfast that while today will be “lovely,” tomorrow will be “pretty miserable for many”. This comes as the UK anticipates its hottest day of the year today, with temperatures predicted to hit 26C.

Today most of the country will bask in warm sunshine while London set to be hotter than Ibiza and St Tropez.

The previous hottest temperature of the year so far was the 26C recorded in Treknow, Cornwall, on Good Friday.

This has led the government to issue urgent reminders to stay at home and obey social distancing rules amid fears people could flock to parks.

However, the mini-heatwave will not last long, as Lear warned a severe 13C temperature drop across the country by Sunday evening.

JUST IN: EU takeover: Brussels on verge of major power debate on health 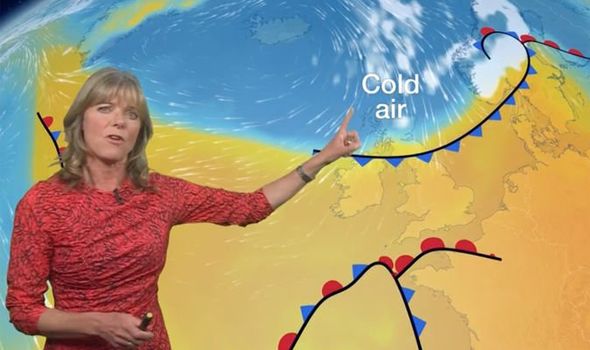 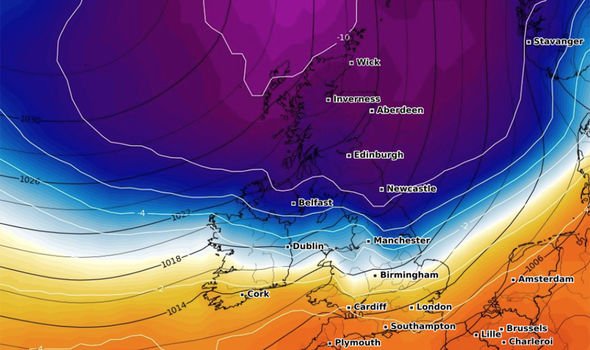 She warned that the “cold air” from the Arctic will cover the entire UK by the end of Sunday as a cold weather front pushes itself steadily south.

Lear told BBC Breakfast viewers: “Today, the bad weather has already hit Scotland, with some heavy rain hitting northern Scotland. The wind there is also reaching at excess of 30 mph.

“As we go through this afternoon, there could be some showers, some of them thundery.

“However south of the Midlands, it will be a beautiful sunny day. We could see 26C like yesterday. 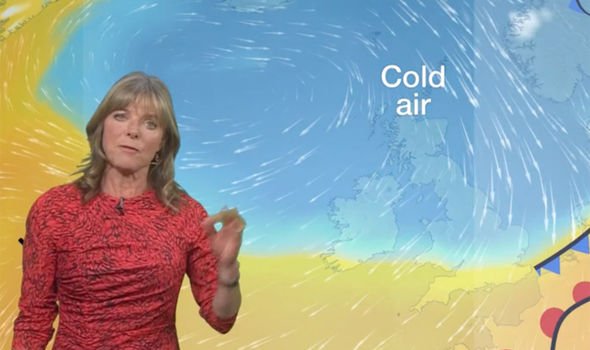 “Overnight, that rain moves across the borders. Behind it, some of the showers will turn increasingly wintry. So you could even wake up to snow anywhere above 100 metres. Snow – can you believe it?

“As we move through Sunday morning, that cold front sinks itself south. It is down to that wind. Gusting in excess of 40mph all the way down from the Arctic.

“Temperatures in areas exposed to the coast will average around 5C to 10C. That is a good 13C down from Saturday. Look at London – 14C for Sunday afternoon compared to 26C today.

“Clear skies overnight into Monday means we could see quite a frost to start the week.” 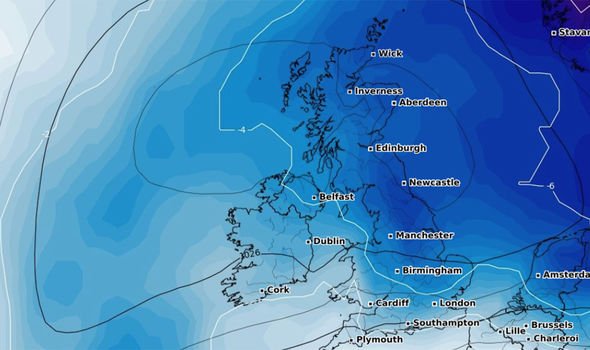 Met Office forecaster Craig Snell said: “Most of us will have some very warm and pleasant sunshine on Saturday, with London and the south-east possibly surpassing the 26C mark, which would make it the hottest day of the year so far.

“This is because of southern winds coming in from Spain, which will make it warm and dry.

“But this won’t be the case on Sunday; a cold front will move in from northern Scotland, meaning temperatures will plunge as much as 15C across the UK, with the possibility of snow in hilly areas.

“These changes do sometimes occur in spring, as we’re in the middle of winter and summer, but this is quite a high drop.”