Bathtime! Baby elephant wallows in a muddy puddle but needs a bit of help to clamber out in adorable footage

A baby elephant has been spotted getting extremely muddy during a playful roll around in a huge puddle.

But when it came time to leave, hilarious footage shows the young calf needing a leg-up from its parent to get out.

Safari tourists came upon the giant herd of elephants as they were walking through the Mashatu Game Reserve on the Botswana-South Africa border. 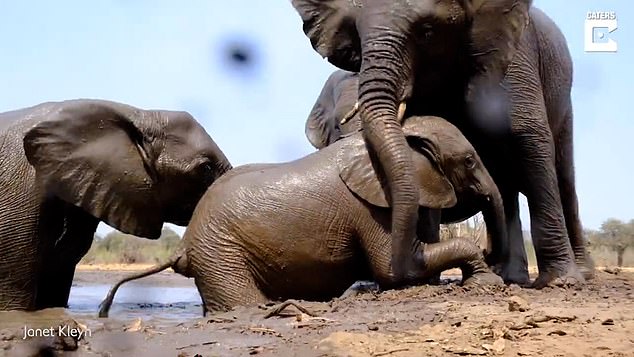 The group are seen stopping at the huge muddy pool to relax and cover themselves in mud to cool off.

In between the giant trunks and legs, the filmer spots a baby elephant jumping in and having a splash about to get as muddy as possible.

Clearly enjoying itself, the elephant even goes for a roll in the brown waters, but it is still too big to be fully submerged. 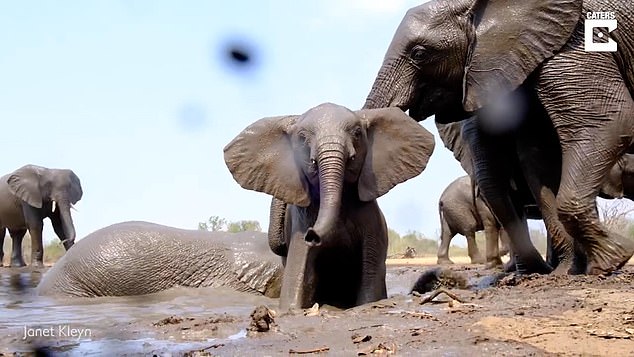 The herd then signals that it is time to move on, but as the baby tries to climb out of the steep-sided puddle it appears unable to reach.

In need of a leg-up, one of the animal’s parents soon comes to the rescue.

The heartwarming pictures were captured by photographer, Janet Kleyn, 53, in September. 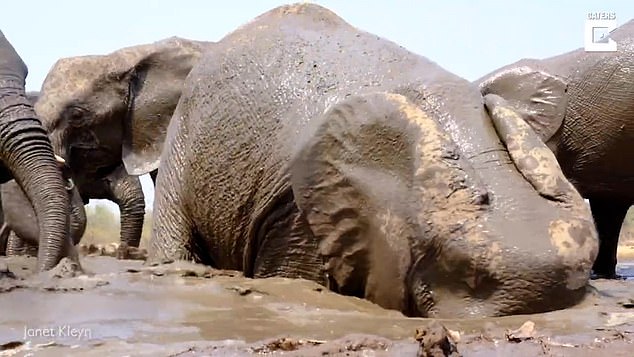 Face plant: The elephants enjoy diving and rolling around in the muddy pool in order to cool down from the high daytime temperatures

Janet said: ‘I love watching the elephants play in the water and particularly the little ones – it’s so joyful.

‘I watched for over an hour as herds came in and out until I found this particular herd, which stayed for about 10-15 minutes.

‘Elephants love to submerge fully on hot days and also spray mud on themselves which serves as an insect repellent and as sunblock.’