An Australian chemical weapons expert is one of two people who have been killed in a bomb blast in the Solomon Islands overnight.

Trent Lee, believed to be in his 40s, was working with 57-year-old British national Luke Atkinson to decommission a piece of undetonated ordinance in a residential area of Honiara, when it exploded. Honiara is the capital city of the Solomon Islands. 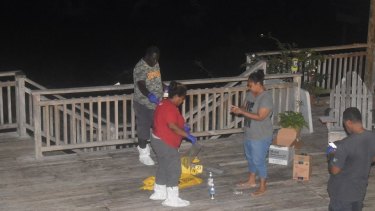 The pair was working for Norwegian NGO, Norwegian People's Aid, which works to remove undetonated wartime explosives in countries all over the world.

The Solomon Islands are littered with undentonated explosives – known as unexploded ordnance (UXO) – from World War II, according to NPA.

Per Nergaard, Deputy Secretary General of the organisation, said the accident – which happened around 8pm local time on Sunday evening – was a very rare occurrence.

"It’s very peculiar that there was a explosion in the residential area," he told The Age and Sydney Morning Herald. "We are very reluctant to speculate on the cause."

Two Norwegian People’s Aid staff, Trent Lee, an Australian in his forties who worked as a chemical weapons consultant, and British bomb disposal expert Luke Atkinson, 57, were killed in an explosion in the Solomon Islands. Credit:Royal Solomon Islands Police Force

“We have extremely strict procedures when it comes to dealing with these type of explosives. It’s a mystery as to how it could happen. It’s a very mysterious event for us."

Local Officer-In-Charge of Explosive Ordinance Disposal (EOD) Inspector Clifford Tunuki said authorities needed to ensure the scene was safe before investigating the cause of the explosion.

"On behalf of the Royal Solomon Islands Police Force I wish to convey my sincere condolences to family and relatives of those two foreign nationals who died in this tragic incident," he said.

"The survey team goes out to confirm the location of the UXOs following reports from the communities and the information is relayed to us. We determine what to do with the UXOs after the survey has located them," he said.

The bodies of both men were taken to National Referral Hospital and remain there for now, according to Hospital CEO Dr John Hue.

A spokeswoman for the Australian Department of Foreign Affairs confirmed the government was aware of the incident.