Los Angeles: Sean Penn and his wife are calling it quits.

Actor and philanthropist Leila George, whose legal name is Leila D’Onofrio, filed for dissolution in Los Angeles Superior Court on Friday (US time), according to court records. 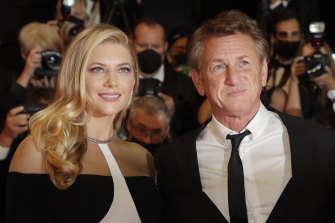 Leila George and Sean Penn pose for photographers at the Cannes film festival on July 10, 2021. Credit:AP

George, an Australian-American actor, is the daughter of actress Greta Scacchi and actor/producer Vincent D’Onofrio. This was her first marriage.

Penn and George’s lawyers have been contacted for comment.

During an August 2020 appearance on Late Night with Seth Meyers, Penn announced he and George tied the knot. The announcement came after rumours surrounding their relationship swirled for months. The Milk actor told Meyers, while holding up his gold wedding band, that they had a “COVID wedding.”

“It was a county commissioner on Zoom and we were at the house with my two children and her brother, and we did it that way,” the Oscar-winning actor said at the time.

The couple made their red carpet debut in 2016. Throughout their relationship, George had been active with Penn’s nonprofit, Community Organised Relief Effort.