The rare super wolf blood moon in January was caused partially by a lunar eclipse and saw the surface of the moon turn into a reddish hue.

While the sight was incredible in itself, what happened on camera was even more startling.

A flash of an asteroid was filmed colliding with the moon on its dark side for the first time ever during a lunar eclipse.

A new report has now revealed that the meteorite smashed into the star at a staggering 38,000mph (61,000kph).

Published on April 27 in the journal Monthly Notices of the Royal Astronomical Society, scientists also found that the debris sent flying by the impact reached peak temperatures that were as hot as the sun’s surface.

Jose Maria Madiedo, a University of Huelva astrophysicist and lead author on the new study, said in a statement: “It would be impossible to reproduce these high-speed collisions in a lab on Earth.

“Observing flashes is a great way to test our ideas on exactly what happens when a meteorite collides with the moon.” 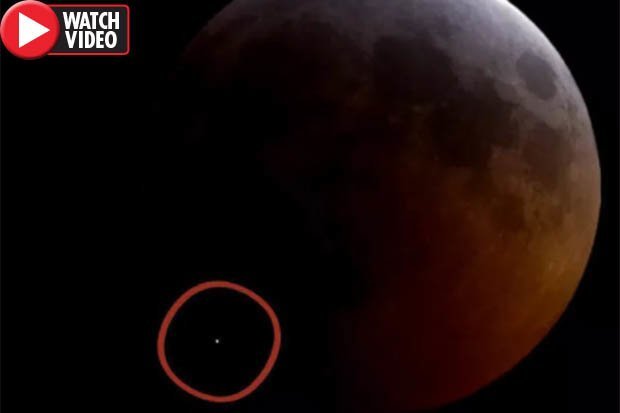 Researchers said that the moon is hit by small rocks more often than Earth because it has only a fragile atmosphere, while Earth’s is thick enough for many space rocks to burn up in the atmosphere before they reach the surface.

The scientists added that observing the flash was especially valuable because they cannot duplicate it on our own planet.

It comes after a black hole was filmed firing plasma beams into space, leaving experts stunned.

Only yesterday, it was revealed that a former NASA scientist claimed “a black hole is at the centre of the earth”.