So, where IS accepting UK tourists? After Portugal flip-flopped on allowing us in, these are the European countries welcoming Brits… and the ones shutting us out

Tourism is starting to reopen across Europe as vaccine drives ramp up and Covid infections fall across much of the continent.

From Monday, people from this country will be allowed to go abroad again as a ban on all non-essential foreign travel is dropped.

The government is using a traffic light system to determine who will have to quarantine when they get back home, but that is not the only limitation – foreign countries will also have to allow tourists in for holidays to go ahead.

So, which European nations will be letting us in, and which will be keeping us out?

Portugal has become much talked-about in recent days: A favourite travel destination of British sun-seekers, it was included on the government’s travel ‘green list’ and initially seemed eager to welcome us from May 17.

But that was all thrown into chaos this week when it was suddenly announced that a ban on non-essential travel might be extended until May 30, throwing hundreds of people’s plans into doubt. 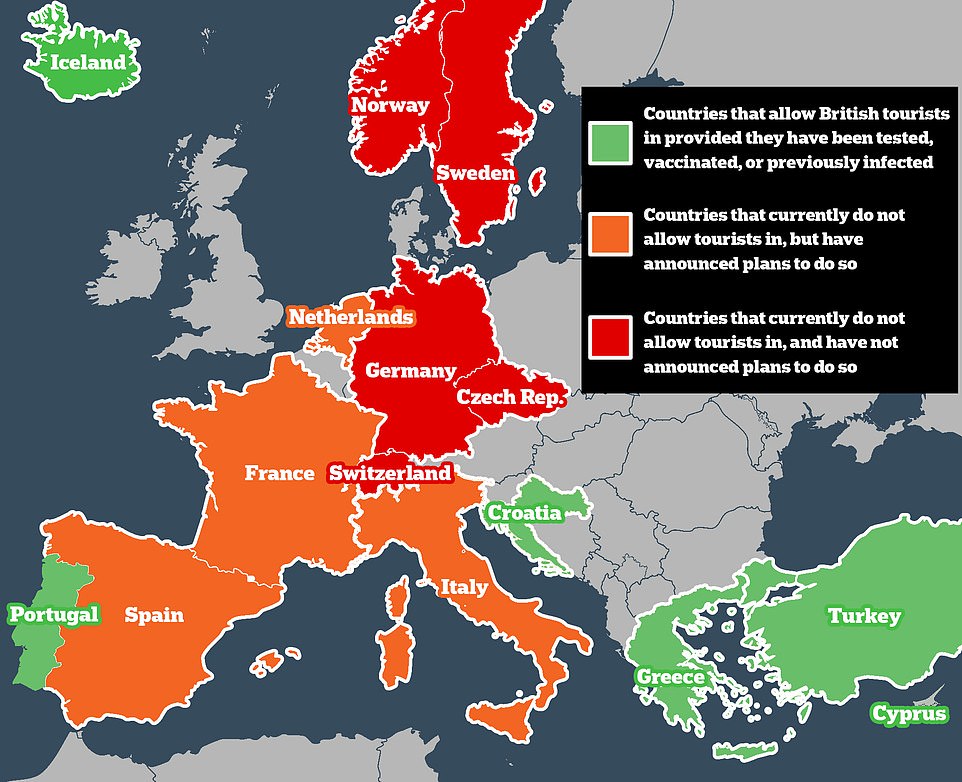 Portugal has now reversed that stance, saying it will accept tourist arrivals from Britain from Monday as originally planned.

All arrivals will have to take a PCR test no more than 72 hours beforehand, and bring the negative results with them to be allowed into the country – with those having tickets now in a rush to get the tests sorted.

Visitors from any foreign nation are being allowed into the country provided they can show proof of vaccination or a previous Covid infection.

Tourists then have to take a PCR test on arrival and wait in their hotel for the results, but border authorities say this will be no longer than 24 hours and is usually over in five or six hours. 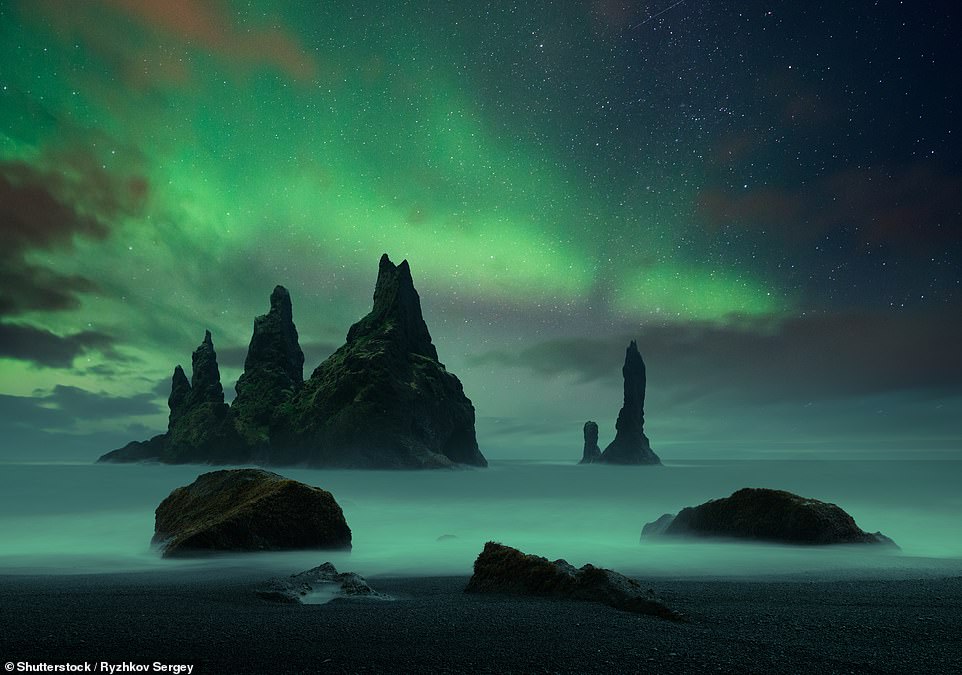 Iceland has been welcoming tourists since April, provided they have been vaccinated or previously infected with Covid and submit to a PCR test on arrival

There is a complicated list of exemptions for those who are not vaccinated, but it is unlikely that most people will qualify.

Iceland also has the benefit of being on the UK’s green list which comes into force on Monday, meaning you won’t need to quarantine after arriving home.

Since April, Greece’s borders have been open to foreign arrivals provided they can show a negative PCR test taken within 72 hours of departure or that they have been fully vaccinated with an EU-approved Covid jab.

Arrivals also need to complete a passenger locator form including details of where they have travelled and where they are staying so it can be used by test and trace authorities in the case of an outbreak.

Tourists are welcome to travel provided they have taken a negative PCR test within 48 hours of departure, have evidence of previous infection, or are fully vaccinated. 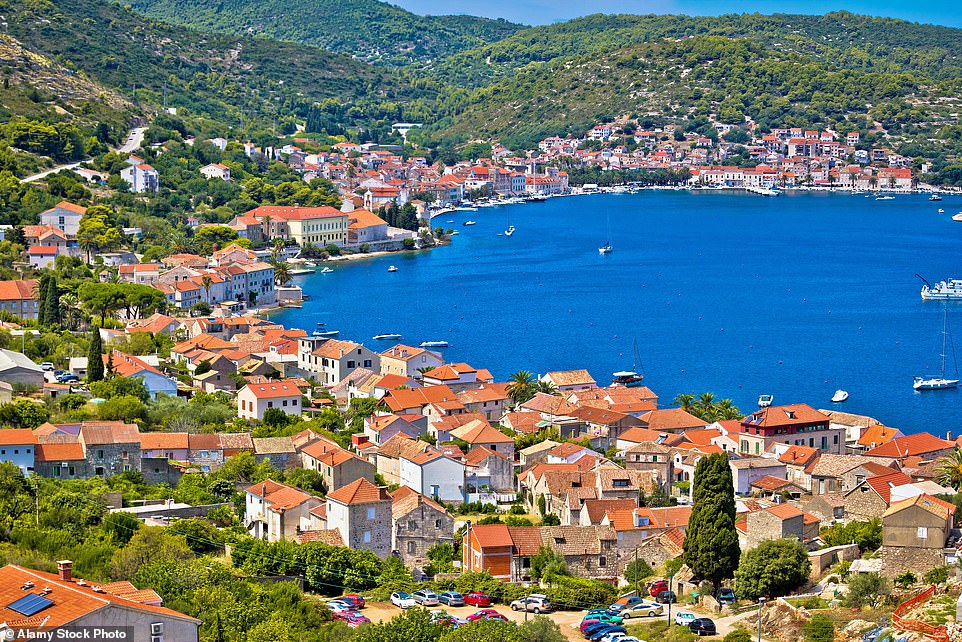 Croatia requires visitors to take a PCR test before arrival and prove they have accommodation in the country, but is otherwise welcoming visitors

Arrivals will also need to provide evidence that they have paid for accommodation within the country – which can include campsites – or own property there.

Travellers are also required to complete a form, which can either be done on arrival or in advance online.

The Mediterranean island is welcoming tourists provided they have been fully vaccinated, can show evidence of a previous infection or have taken a negative PCR test within 72 hours of departure.

Travellers also need to register for a flight pass no later than 24 hours before departure.

For those using a PCR test to get into the country, details of the test will need to be entered into the online form, meaning they will have to plan the timing of the test carefully.

Despite the country being in almost-total lockdown, Turkey is allowing tourists in without a PCR test or evidence of vaccination. 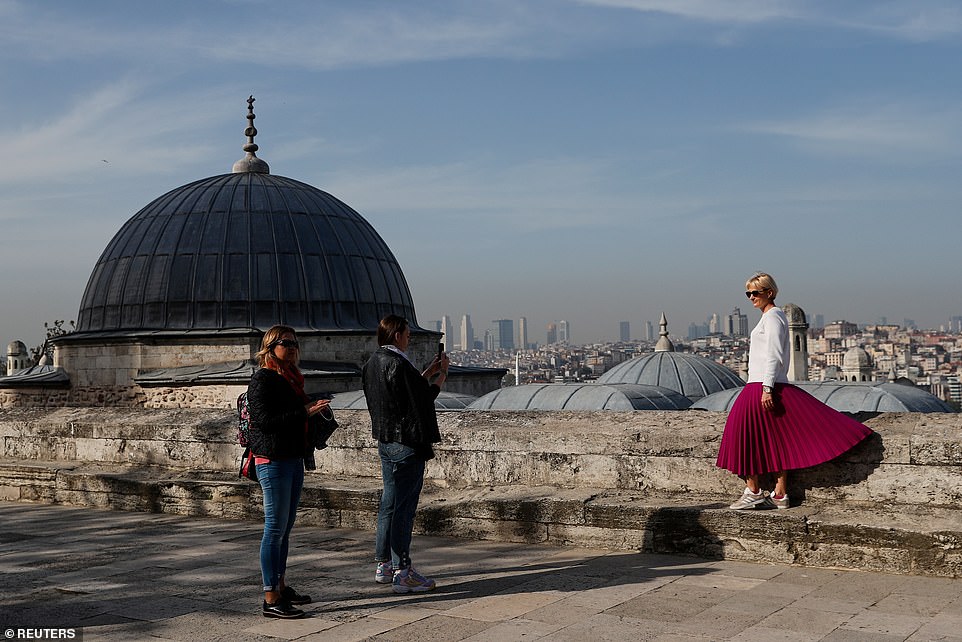 Turkey is in total lockdown, aside from tourists who are exempt from all rules and welcome without a test or vaccine – though the welcome from locals may not be warm

Tourists are largely exempt from the lockdown rules – which have confined Turks to their homes for weeks – while hotels and other businesses involved directly in tourism have been allowed to remain open.

However, many other businesses – such as shops and restaurants – remain closed. City streets are also deserted, which could be a blessing or a curse, depending on your idea of a good holiday.

Most other European countries either remain fully closed to tourists, or have highly restrictive entry policies that make tourist travel all-but impossible.

However, some have started planning for a reopening and have been giving details of when people might be allowed back.

Prime Minister Mario Draghi said last week that Italy plans to run its own ‘green pass scheme’ which would allow tourists in from any country provided they are vaccinated, have previously been infected, or have tested negative. 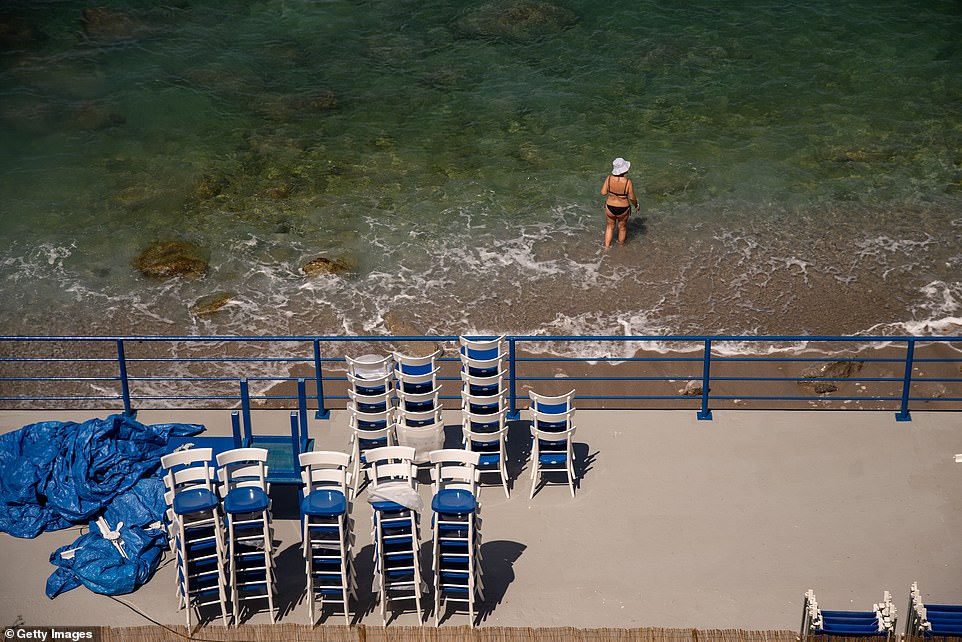 Italy says it will allow visitors from outside the EU to arrive from ‘mid-May’ using some kind of green pass, though has given no further details or a firm date

Mr Draghi said the scheme would be in place by ‘mid-May’, raising hopes that it might be ready in time for Britain’s rules to relax on May 17.

But since his initial announcement, no further details have been published leading to frustration and confusion among those hoping to travel.

Emmanuel Macron laid out plans for a gradual reopening of France on April 29, including a date for foreign tourists to return: June 9.

Under those plans, all visitors would have to qualify for a Pass Sanitaire, essentially a green certificate with a negative Covid test or vaccination required to qualify.

At the moment, the scheme – which French citizens also use – is run through TousAntiCovid, their equivalent of the NHS app. It is unclear how this would be opened up to foreign arrivals.

Like the UK’s roadmap, France’s unlocking requires infections to be falling in order to progress, meaning it could be called off or delayed.

Cases are currently declining in the country, though at a very gradual pace.

Fernando Valdes, Spain’s tourism minister, laid out his plans for reopening the tourist economy last month and predicted the country will be ready to welcome back foreign arrivals in June. 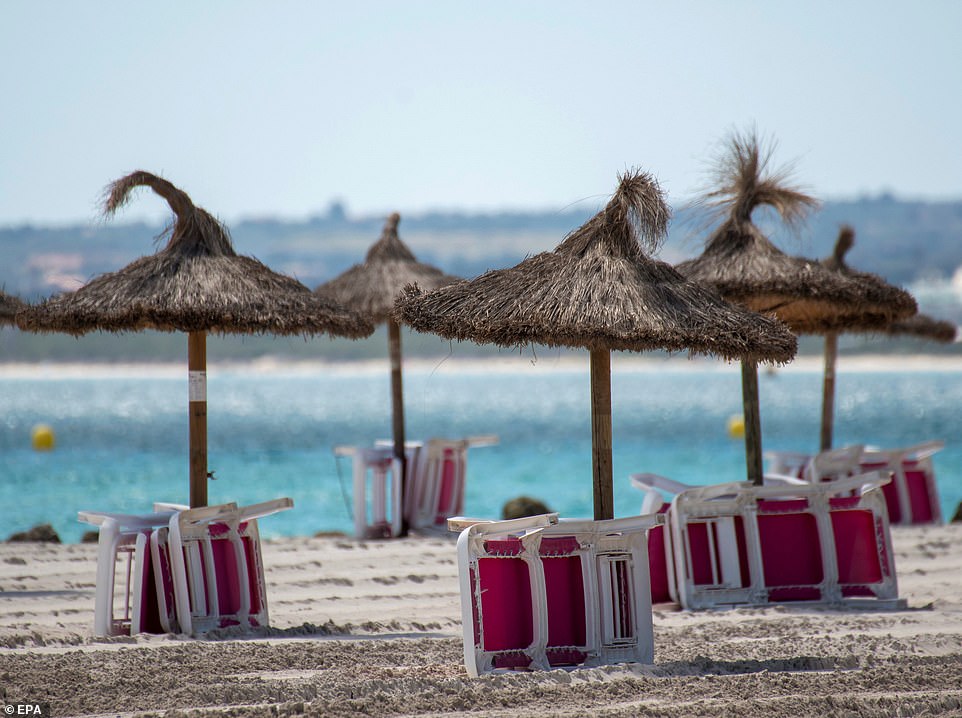 Spain has said it will be ready to welcome foreign tourists ‘from June’, but has not given a firm date or said what the requirements will be

Like other countries, entry would be dependent on some kind of green pass scheme requiring evidence of vaccination, a past infection, or negative test taken shortly before travel.

Valdes said a pilot scheme would run throughout May and that Spain would be ‘ready to receive visitors in June’.

No further details have been given.

An oddball on this list: The Netherlands is allowing tourists into the country but says it strongly discourages people from visiting.

If you do decide to go, then the government advice is to stay in your hotel as much as possible and avoid busy places when you do go out.

Many hotel facilities, including restaurants and pools, are currently closed, and there is a night-time curfew in place from 8pm until 6am.

However, from May 19 restaurant and bar terraces will be allowed to open from midday until 6pm and all non-essential retail is open.

Other European nations are currently not allowing tourists in, and have not announced plans to allow it. 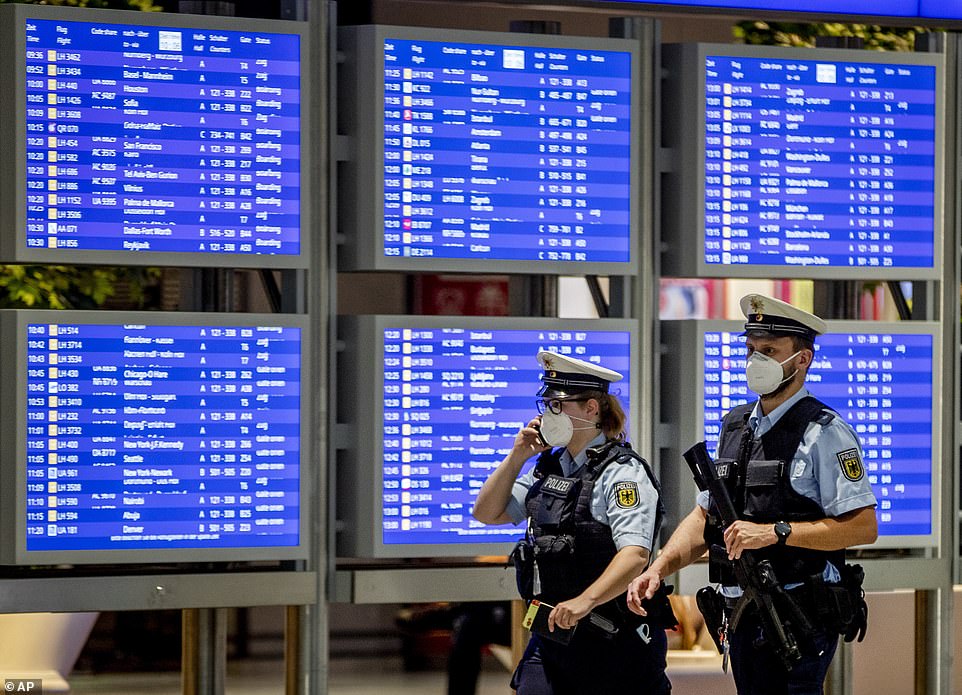 In Germany, it is currently illegal to visit for non-essential purposes and the country has not announced plans to resume tourist travel

This includes Germany, which has made it illegal for companies to transport people there for non-essential purposes.

Others nations which ban non-essential travel include the likes of Norway, Sweden, the Czech Republic, and Switzerland.

What does the EU say?

Currently, the EU has adopted a recommendation for all 27 member states to ban non-essential travel from third countries – though this is non-binding and countries can ignore it if they wish.

The EU commission last week proposed an update to the guidance which would allow fully-vaccinated citizens of any foreign nation in, provided they have been given an EU-approved jab.

The threshold to get on the ‘low infection’ list would also be raised so more countries can be added, allowing citizens into the EU whether they have been jabbed or not.

However, the guidance still needs to be approved and there is no clear indication of when this might happen. Even then, it would not be binding.