Lawyers for the tech giant made their first appearance in Perth Magistrate’s Court on Tuesday and conceded the court had jurisdiction, clearing the way for criminal proceedings over alleged clickbait advertising to go ahead. 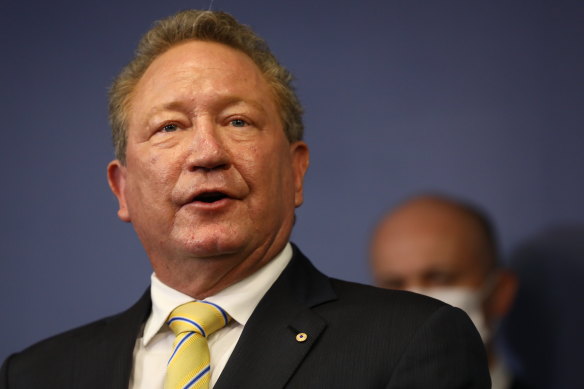 Andrew Forrest’s image was used without his permission to promote cryptocurrency investment scams in ads on Facebook.Credit:Dominic Lorrimer

Forrest, the founder of iron ore miner Fortescue Metals Group, alleges the social media giant was criminally reckless in allowing bogus advertisements using his image to appear on its site.

The three charges allege Facebook did not take sufficient steps to take down the scam advertisements, which feature the billionaire and other prominent Australians.

In a separate civil case launched in March, the ACCC alleges the scams cost one user more than $650,000.

Meta previously contested the court’s power to hear the matter.

Simon Clarke, representing Forrest, said outside the court it was a milestone day as it was the first time Meta had conceded jurisdiction in Australia.

“Usually, they subject you to a bit of a battle for two or three years,” he said.

The brief hearing mostly centred on an application about the parallel Federal Court proceedings brought by the consumer watchdog.

In bringing the charges in February, Forrest said he’d made repeated requests to Facebook to take down the advertisements, alleging the ads first appeared in March 2019 and have appeared as recently as this year.

If the WA case reaches trial, it will pass over to the Commonwealth Director of Public Prosecutions.

While Meta could face fines, Clarke said a conviction would also serve as a warning to all social media platforms.

“It would cause (Meta) to reflect on the way they’re running their platform,” he said.