Belarus leader lands in Sochi as hundreds of thousands demand an end to his rule, following the disputed August 9 vote. 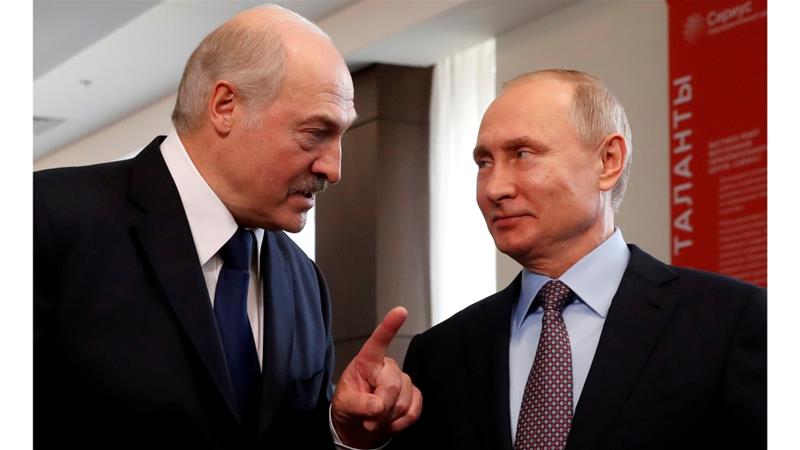 Lukashenko’s plane landed in the southern Russian city of Sochi on Monday morning, a day after police detained 774 people at anti-government protests across Belarus, including 500 in the capital Minsk, the Belarusian interior ministry said on Monday. At least 100,000 protesters flooded the streets of Minsk on Sunday.

The meeting between the two leaders marks their first face-to-face talks since the contested Belarusian election.

The Kremlin said Putin and Lukashenko would address aspects of their strategic partnership, including energy, trade and cultural projects.

Putin congratulated Lukashenko on his victory at the time, but later described the vote as not ideal. The Russian president’s actions so far suggest he has no desire to see the leader of a neighbouring ex-Soviet country toppled by pressure from the streets – even if Lukashenko has often proved a prickly and difficult ally.

Protests, some featuring violence, have gripped the country for five weeks since the vote, with anti-Kremlin placards seen at some rallies

“I’m worried about Russia’s intentions to enforce its interests here. We have to be friends with Russia, but it is not good for neighbouring countries to be involved in our internal problems,” said a protestor at Sunday’s rally.

Katsiaryna Shmatsina of the Belarusian Institute of Strategic Studies told Al Jazeera: “Lukashenko this month has exhausted all the tools he used to apply in the previous years which were used to large scale oppression towards people. People would get beaten and detained and then this would scale down protests. This time this doesnt work.”

On Monday, the UN rights council agreed to host an urgent debate on reports of violence at the hands of authorities during protests.

Lukashenko, 65, last week gave an interview this week to Russian journalists, including Margarita Simonyan, editor-in-chief of Kremlin-controlled channel RT, in which he warned that if his government falls, “Russia will be next”.

Lukashenko, who has ruled the Eastern European nation of 9.5 million people with an iron fist since 1994, has previously blamed the West for fomenting demonstrations in Belarus in hopes of turning it into a “bridgehead against Russia”.

Al Jazeera’s Step Vaessen, reporting from Minsk, said: “Lukashenko has left Belarus for the first time since the political crisis has started and his bargaining position has not improved after this mass rally on Sunday. He was hoping to keep the numbers low to show to President Putin that he has everything under control which obviously didn’t work.

“He needs more support from President Putin then ever before. And Putin is willing to give him his support because Putin really wants to prevent Belarus to fall in the hands of the West and possibly NATO. But that support will come at a price.”

“There are different scenarios are being discussed right now by observers as to what will come out of this meeting but possibly, we won’t even find out. The Kremlin has said that no statements will be given after the meeting.”