Alexei Navalny ordered a judge to ‘stop shaming yourself’ as he denied defaming a WWII veteran who appeared in a pro-Putin propaganda video.

The opposition leader, 44, is in the dock for lashing out at Vladimir Putin supporters – including the 95-year-old veteran – who appeared in a pro-Kremlin video last year, describing them as ‘traitors’ and ‘the shame of the country’.

Today’s court appearance comes just over a week after Navalny was sentenced for a different offence – and hours after his wife Yulia fled the country over fears his supporters would be the Kremlin’s next targets.

Appearing in court on Friday, Navalny – who faces two years in jail – sparred with the judge and prosecutor and mocked the veteran’s grandson, accusing him of ‘selling out’ his grandfather over the propaganda clip.

He ordered the judge to ‘enrol in some courses to improve your knowledge of the laws of the Russian Federation’. 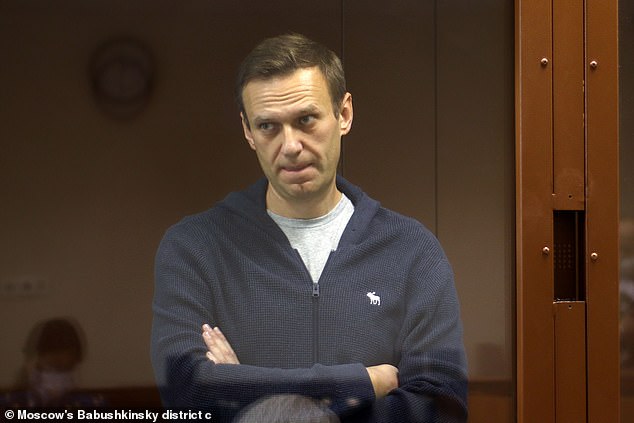 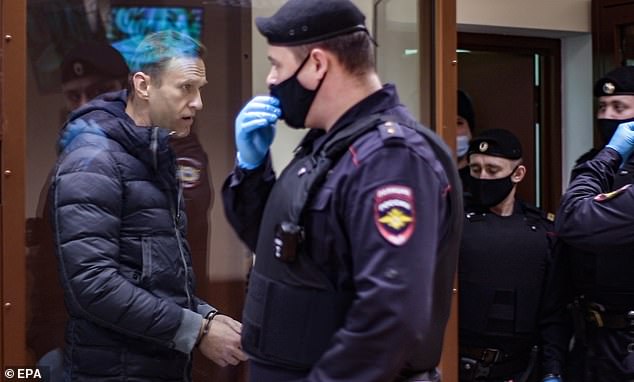 The opposition leader, 44, (pictured today) is in the dock for lashing out at Putin supporters – including the 95-year-old veteran – who appeared in a pro-Kremlin video last year, describing them as ‘traitors’ and ‘the shame of the country’

Heavily-armed riot police surrounded the court and set up cordons outside.

During a theatrical trial Friday, the opposition figure sparred with the judge and prosecutor and was repeatedly reprimanded for his behaviour.

His lawyer Olga Mikhailova called on the court to allow media in the courtroom and accused the judge of bias, asking that she be removed from overseeing the hearing. 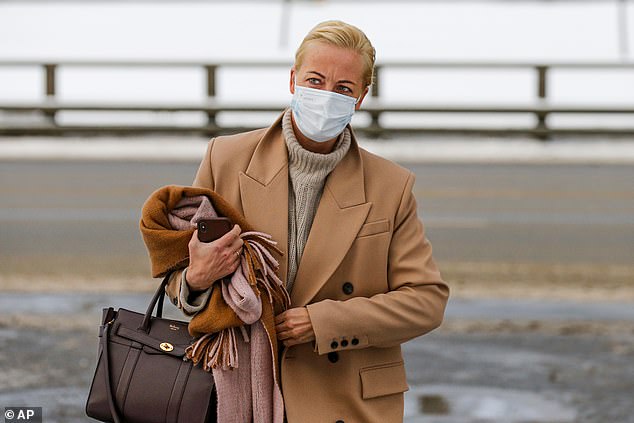 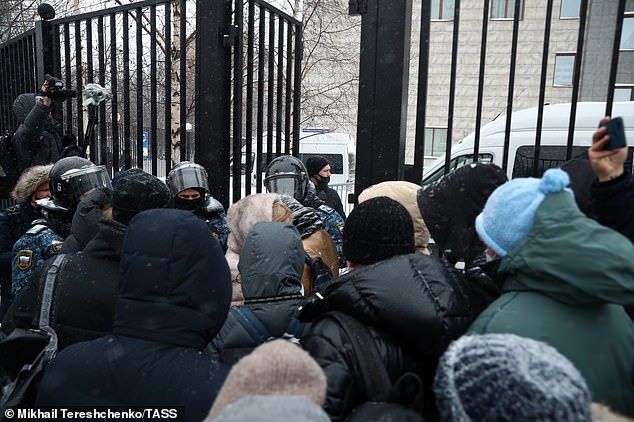 Russia’s investigative committee launched the defamation probe against Navalny last June after he had slammed the ‘corrupt stooges’, ‘people without conscience’ and ‘traitors’ who appeared in the pro-Kremlin video.

The video was a political advert for a package of constitutional reforms signed by Putin last year which could allow him to stay in power until 2036.

Authorities accused Navalny of ‘denigrating the honour and dignity’ of the elderly World War II veteran who featured in the video. 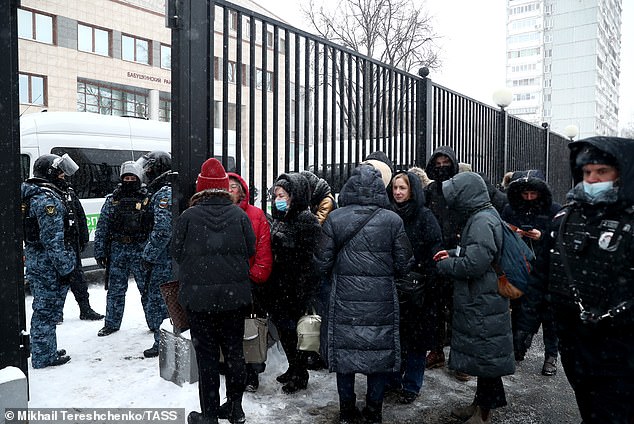 The charge carries a maximum penalty of two years in prison, but the court is not expected to pronounce a verdict yet.

In his hearing today, Navalny told the judge: ‘Stop shaming yourself and enrol in some courses to improve your knowledge of the laws of the Russian Federation.’

Later, he again accused the veteran’s grandson of ‘selling out’ his grandfather.

When the prosecutor began reading out the frail veteran’s testimony, the court heard a detailed description of his wartime experiences in Soviet-era Belarus. 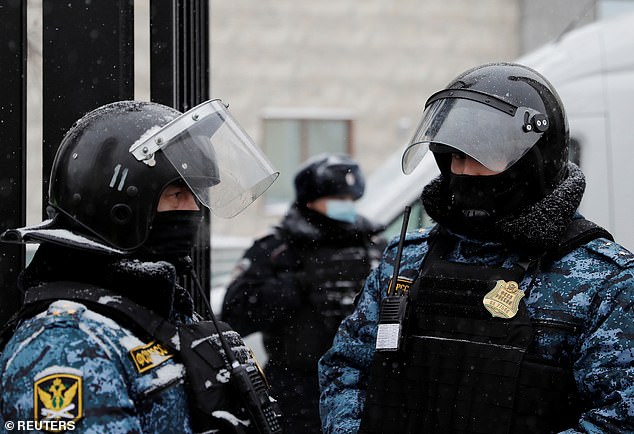 But Navalny interjected, saying the veteran’s memoirs had nothing to do with the proceedings.

Navalny was arrested on January 17 when he returned to Russia from Germany, where he had spent five months recovering from nerve-agent poisoning that he blames on the Kremlin.

A different court last week ordered him to serve two and a half years in prison on the grounds that his time in Germany violated a suspended sentence he was handed in a money-laundering and fraud conviction.

His lawyers said Friday they had filed an appeal. 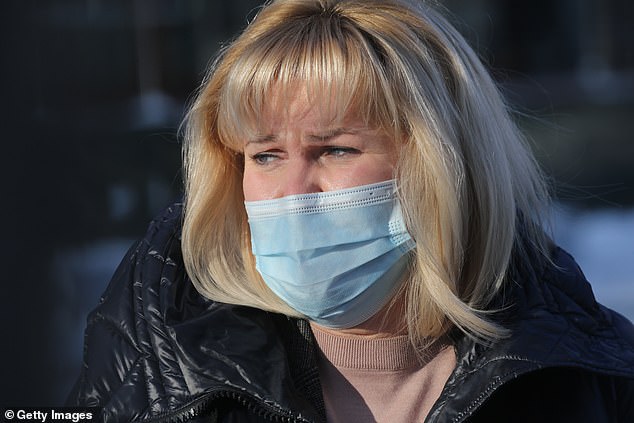 His lawyer Olga Mikhailova (pictured) called on the court to allow media in the courtroom and accused the judge of bias, asking that she be removed from overseeing the hearing

The arrest sparked protests throughout the county on two weekends in January, in which a total of about 10,000 people reportedly were arrested.

Earlier today, Russia said it is ready to cut ties with the European Union if the bloc hits it with harsh economic sanctions and travel bans over the Navalny case.

And now, Russian Foreign Minister Sergei Lavrov told the bloc that Russia is ‘ready’ to cut ties if the sanctions go ahead, warning: ‘If you want peace then prepare for war.’

It is not clear exactly what cutting ties would involve, however Mr Lavrov stressed that Russia is willing to strive for complete economic independence – in a similar style to its self-sufficient military.

The EU is also leaning on Russia for doses of its Sputnik V Covid-19 vaccine, which is still pending approval from the EU regulator. 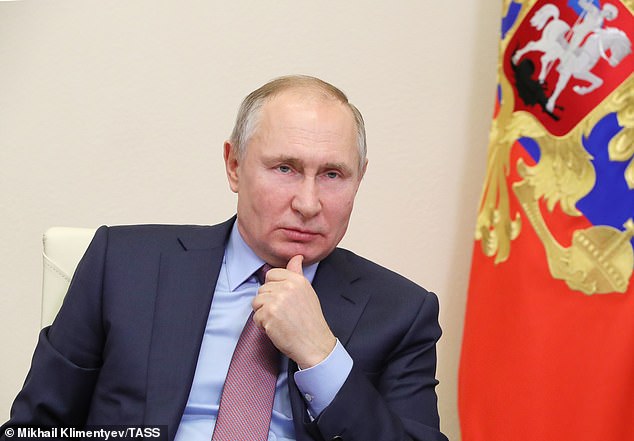 Russia (President Vladimir Putin, pictured) is ready to cut ties with the European Union if the bloc hits it with harsh economic sanctions and travel bans, its foreign minister has confirmed 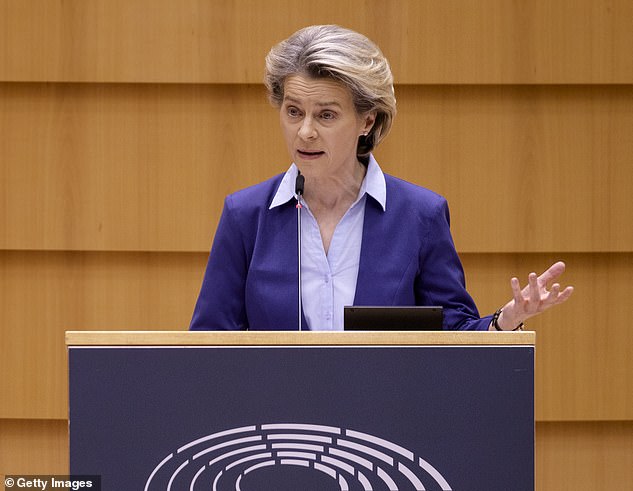 Russia has been locked in a tense standoff with the EU over the arrest and imprisonment of staunch Vladimir Putin critic Alexei Navalny. Pictured: President of the European Commission Ursula von der Leyen

Three European diplomats said the EU European Union was likely to impose travel bans and asset freezes on Putin allies as soon as this month – with France and Germany signalling their willingness to move ahead.

In an interview due to be published in full later today, Mr Lavrov was asked whether cutting ties with the EU was on the cards.

He replied: ‘We proceed from the fact that we’re ready (for that).

‘In the event that we again see sanctions imposed in some sectors that create risks for our economy, including in the most sensitive spheres.

‘We don’t want to isolate ourselves from global life, but we have to be ready for that. If you want peace then prepare for war.’ 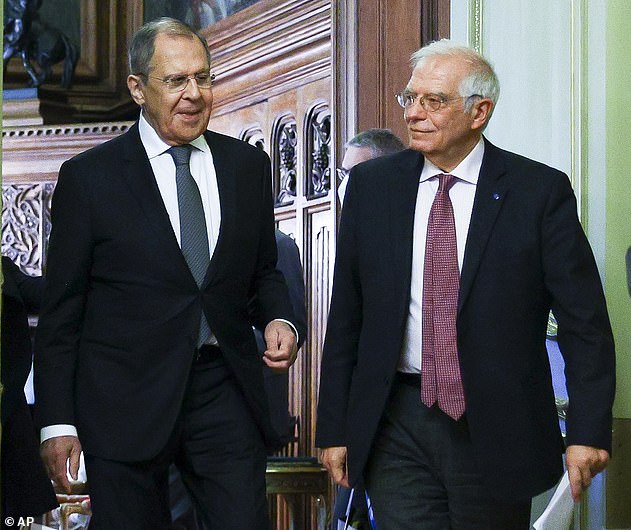 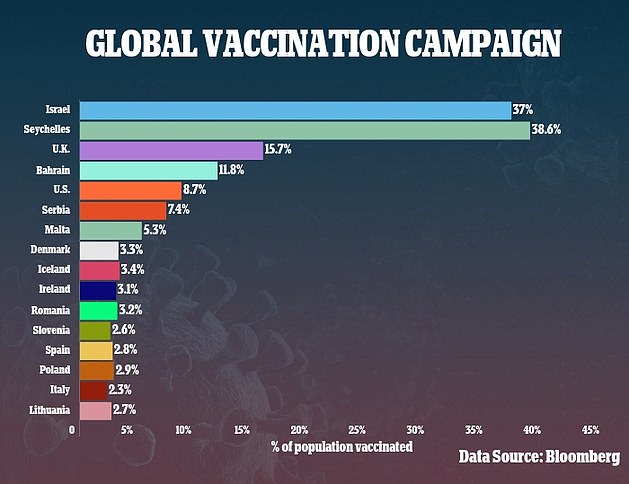 In it, Mr Borrell congratulated Russia for its Sputnik V Covid-19 vaccine, before pushing the independent European Medicines Agency to authorise the jab so that EU citizens can use it.

US officials believe Mr Borrell ‘got played,’ by Russia, as they push for a united front against the country amid calls for it to release Mr Navalny.

Speaking at Friday’s press conference, Mr Borrell said: ‘I take the floor to just congratulate Russia for this success. It’s good news for the whole mankind because it means we are going to have more tools to face the pandemic.’

A former senior US official for Barack Obama told The Daily Telegraph: ‘Borrell should not have gone to Moscow in the absence of securing some kind of substantial deliverable in advance… It does look like the Russians played Borrell.’

Putting it bluntly, former Conservative Party leader Sir Iain Duncan Smith said: ‘This is an example of the EU kissing the backside of Russia.’

Following the press conference, Mr Borrell told the European Parliament he would suggest the EU impose sanctions on Russia over the arrest of Mr Navalny and the crackdown on his supporters. 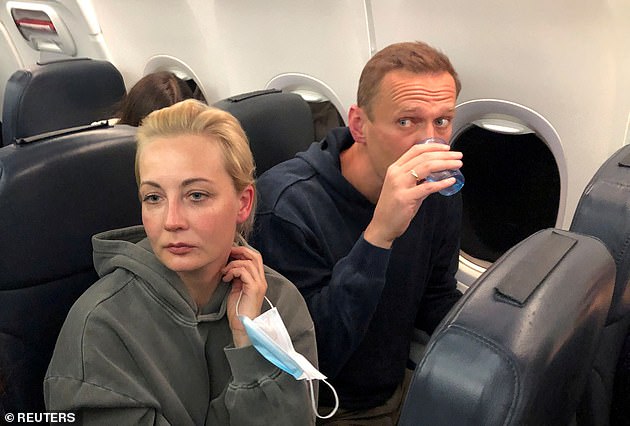 Yesterday, Russian police raided Navalny’s headquarters as his wife fled the country and headed to Germany.

The search by a dozen police ended about 1am.

It was not immediately clear if the police took away items as potential evidence, but photos posted by Navalny´s staff on social media showed them bagging material including a coffee mug.

The 44-year-old fled amid increasing pressure from the Kremlin on Mr Navalny’s supporters which saw her being detained during protests against her husband’s arrest.

There was no statement from police about the reason for the search of Mr Navalny’s offices in Moscow.

The Mediazona news website that focuses on political repressions and human rights abuses cited a Navalny staff member as saying that police said they had received a report that pornography was being published at the office.

Yulia was detained during one of the protests over her husband’s arrest and posted a selfie onto her Instagram page with the caption: ‘Apologies for the poor quality. Very bad light in the police van.’

According to local media reports, she was released the following day and later fined 20,000 roubles (£196) for attending an ‘unsanctioned protest’.

The United States, Britain, Germany and the EU have urged Moscow to immediately free Mr Navalny, with US Secretary of State Antony Blinken saying Washington will coordinate closely with allies to hold Russia accountable. 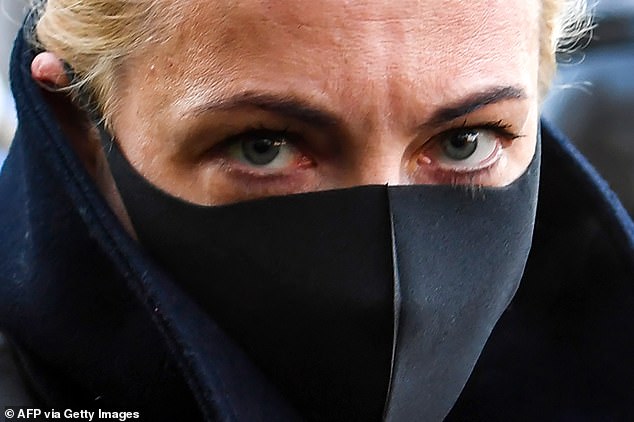 Pictured: Yulia Navalnaya arrives at the Moscow City Court to attend the trial of her husband

In the wake of his sentencing earlier this month, allies of Russian opposition leader Mr Navalny called for immediate protests after the Kremlin critic was handed two-and-a-half years in prison for violating the terms of a 2014 conviction.

At his sentencing, Mr Navalny mocked Putin by giving him the nickname ‘Vladimir the Poisoner of Underwear’ and told a judge his trial is only taking place because the Russian leader had failed to kill him with Novichok.

Navalny told the Russian courthouse that Putin is ‘demanding to steal underwear from opponents and smear them with chemical weapons’.

He also said Putin wanted him imprisoned to ‘scare millions’ and warned the President that ‘people will realise.’

He then made a heart gesture to his wife who was sat at the back of court and said ‘Don’t be sad! Everything is going to be all right.’