The infamously irascible writer spent his final months in a nursing home on the NSW South Coast. 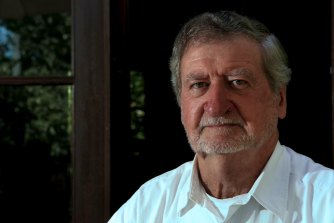 Alan Ramsey at his Canberra home in 2011.Credit:Alex Ellinghausen

Ramsey had a 56-year career in journalism and wrote a weekend column for The Sydney Morning Herald between 1986 and 2008.

He was 28 when he went to work in the Canberra press gallery in 1966, following a stint as a war correspondent in Vietnam in 1965. However, he was no cleanskin. He'd already clocked up 13 years in journalism, working in Sydney, Melbourne, Mt Isa, Darwin, Port Moresby and London, and on publications including The Australian and Time. He retired 43 years later in 2008 as the oldest and longest-serving reporter writing about federal politics.

Tributes have poured in from people in the media.

Mike Carlton paid tribute on Twitter: "Sad to hear today of the death of Alan Ramsey, the SMH Canberra correspondent and columnist. Irascible, fearless, implacable, in his heyday in the Gallery there was none better."

Former politician Tony Windsor said: "Very sorry to hear of the death of Alan Ramsey … one of the greats in the Canberra Press Gallery of SMH fame. Always enjoyed his work."