Al Sharpton speech at border drowned out by protesters

Al Sharpton’s press conference at Del Rio, Texas, was drowned out by protesters accusing him of stoking racism

Al Sharpton’s speech at the Haitian migrant encampment in Del Rio, Texas, on Thursday was drowned out by protesters who accused him of using the border crisis to stoke racism.

Sharpton took a tour of the migrant camp on the U.S. southern border in Del Rio to “meet and pray with refugees in the wake of the humanitarian crisis,” according to Wednesday press release from the civil rights organization National Action Network (NAN), which Sharpton founded in 1991.

After touring the situation with Democratic Del Rio Mayor Bruno Lozano, Sharpton held a press conference during which he accused Border Patrol of using tactics reminiscent of the slavery era, but his comments were overwhelmed by protesters who accused him of being “a disgrace” and “a racist.”

Among the phrases hecklers hurled at Sharpton were “Why are you stoking racism where it doesn’t exist?” and “How much money are you making out of this?”

“Del Rio is not a racist city,” someone shouted. “Del Rio is a loving, caring community. We don’t want your racism in Texas. Get out of here! Nobody wants to hear your racist nonsense in Del Rio!”

“He [incites] violence and riots,” said Kelsey French, the wife of a Border Patrol agent, according to local Fox 29. “He is not pro-cop. Our community is very cop. We support our men and women in the green and the blue and every color that they wear. We love them. We don’t want him here we don’t want his trouble. Amen.” 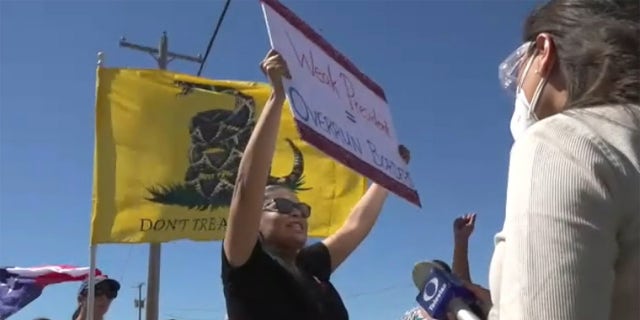 Sharpton spoke dismissively of the protesters, whom he accused of being “Trump supporters” and “right-wingers” who “can scream all they want.”

Sharpton also said he wanted the Border Patrol to face an investigation while someone shouted that he is “a race-baiter.”

Sharpton said on Wednesday’s episode of MSNBC’s “Morning Joe” that he and his group intended to get to the bottom of the recent controversial photos some Democratic lawmakers have claimed show Border Patrol agents using whips against Haitian migrants, though they did not possess whips.