The head of the Department of Agriculture Andrew Metcalfe has angrily denied signing the death warrant for millions of sheep, after relaxing the summer ban on live exports of sheep to the Middle East.

The relaxation comes after successful lobbying by the live export industry and was quietly announced this week, on the eve of the election being called, denying parliament the opportunity to try to stop it by disallowing it. 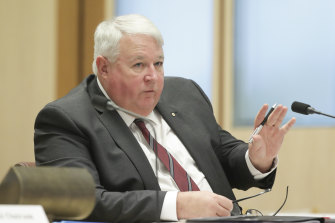 Department of Agriculture, Water and the Environment Secretary Andrew Metcalfe in 2020.Credit:Alex Ellinghausen

The summer ban on live exports to the Middle East was first imposed by the industry itself as it fought off a push to ban the trade outright, following the 2017 Awassi Express disaster in which thousands of sheep dropped dead on board a voyage due to heat stress.

But the industry has been requesting the ban be relaxed and trade allowed to resume for the first two weeks of June.

On Wednesday the Department of Agriculture, which is tasked to regulate the trade, agreed and said shipments to the Red Sea would now be permitted.

The department said in a statement that new “climatology data” meant that there was a “reduced risk” of sheep suffering heat stress during voyages to the Red Sea in June.

“The department is now considering the feedback received, available science and evidence and is conducting further analyses,” it said.

Department Secretary Andrew Metcalfe told an Estimates hearing it was based on “granular data” and temperatures in the region for the last 40 years but did not project future likely temperatures.

Greens Senator Mehreen Farqui said the Department had “signed an order for the death warrant of millions of sheep.”

“Any assertion that I have signed a death warrant for millions of animals is frankly outrageous and I reject it,” Mr Metcalfe told the Greens senator.

The Department said it would co-fund research carried out with the live export industry during the northern hemisphere shipments.

“The research will further ascertain and align sheep physiological and behavioural changes observed during a voyage with other data,” it said.

“The claim that they need to gather more data on live exports sounds similar to the Japanese saying they need to kill whales purely for scientific research,” Ms White said.

“This decision puts the financial interests of a handful of exporters above the lives and well-being of thousands of Australian animals and the wishes of Australian community,” she said.

“It’s also very worrying that these regulations have been put in place now, on the eve of a federal election being called – when Parliament may not sit again for months and so may not have the chance to scrutinise these last-minute changes,” he said.

Last week, Agriculture Minister David Littleproud told this masthead that any decision was independent of the government and a matter solely for the department.