Early January is when many of us pack away the Christmas tree, tinsel and lights till next festive season, but for Eastern Orthodox Christians like Luba Cowall, festivities are in full swing.

Thursday is Christmas Day for denominations that follow the old Julian calendar, and so it’s a busy time for the Holy Protection Cathedral of the Russian Orthodox Church in Brunswick. 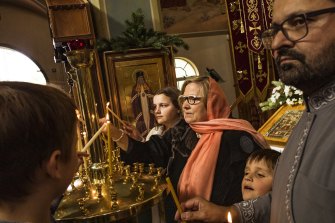 For Mrs Cowall, the daughter of Russian refugees, it was a joy, following many months of worshipping online under COVID-19 restrictions, to be able to attend Christmas Eve service on Wednesday, and Christmas morning service on Thursday with her grandchildren, Nicholas, 14, Sophie, 12, and Peter, 7, and her son, Nicholas, the choir conductor.

The children get two Christmas Days each summer.

On December 25 they dined and exchanged gifts in the Endeavour Hills home of the parents of their mother, Kathleen.

And on Thursday there were to be more presents, and wishing their ‘‘babenka’’ Mrs Cowall, S rozhdyestvom Hristovym ("with the birth of Christ") over dinner at her home in East Burwood.

They are happy moments after a tough year. Mrs Cowall’s husband, Nikolaj, 88, died of cancer in April. Having Christmas without him is hard. ‘‘The first of anything is difficult when you lose a loved one,’’ Mrs Cowall said.

Their daughter, Natasha, 41, who teaches English in Vietnam, could not make it to the funeral due to travel restrictions, nor could she be home for Christmas.

For the first time at the Brunswick cathedral, worshippers had to book for Christmas services, and they were full-up.

The Cathedral has been part of Mrs Cowall’s life since she was a girl, in 1954, when it opened in Oxford Street, Collingwood.

In 2006, the majestic new gold-domed cathedral, with its icons and frescoes, opened in Albion Street, Brunswick.

Mrs Cowall, 73, whose husband's original surname was Kovalenko, observes the feast days with her grandchildren, "so they know it all".

"They were born in Australia but I think it gives you an identity, that you have other roots."

Mrs Cowall and her family found a community at the Collingwood church after migrating to Australia in 1952.

From age 16, Mrs Cowall was involved in lay ministry and now heads the ladies’ auxiliary that helps maintain the church and cares for sick and disadvantaged members.

"That was a place where we had an identity," Mrs Cowall says of the Collingwood church. "All the Russians gathered there, we spoke the language, we had something in common with all those people, and our faith."

Today, at Brunswick, "people still travel here from everywhere" for worship and to connect with community, she said.