Wellington: The mortuary at Fiji’s largest hospital is now full, the country’s health ministry says, due to a second wave surge in daily coronavirus cases in the Pacific island nation.

Although Fiji had early success during the pandemic with keeping the virus at bay by closing its borders, the highly transmissible Delta variant, first detected in India, is now spreading. 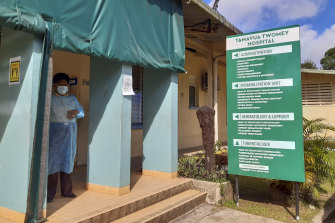 To date, there have been 33 COVID-19 related deaths in Fiji, with 31 of these deaths occurring since the outbreak that began in April.

Fiji’s health system is currently straining under the weight of the outbreak, and hundreds of new cases are being reported daily.

The Colonial War Memorial Hospital in the sole public hospital in the capital of Suva and its facilities are now devoted to caring for COVID patients. There were no immediate details on the capacity of the morgue.

“Due to the mortuary now being utilised to full capacity, the concerned relatives are kindly requested to make immediate arrangements for the uplifting of the deceased from the mortuary, and the performance of final funeral rites for your loved ones,” the ministry said in a statement.

There have been 6443 cases reported during Fiji’s outbreak that started in April 2021. To date, the country has recorded a total of 6513 cases since the very first case was reported in March 2020.

In its daily COVID-19 update on Monday, Fiji’s Ministry of Health and Medical Services said there were 352 new cases of the virus, as well as three deaths to report in the past 24 hours. This followed a new daily high of 522 new infections on Sunday.

Due to the outbreak, Fiji police have warned they are stepping up enforcement of COVID restrictions, RNZ reported.

Acting Police Commissioner Rusiate Tudravu issued the warning after 48 people were arrested in the last 24 hours for failing to wear a mask in a public place within a containment or lockdown zone. 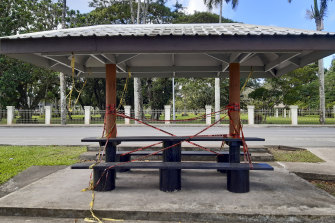 A picnic spot in front of the Prime Minister’s residence is closed off to the public during the COVID-19 pandemic in Suva, Fiji.Credit:AP

More than 1000 people have also been arrested for breaching the nation’s 10pm to 4am curfew.

“There are a lot of fearful people, so much anxiety and continuing distrust of the government, but the government is not coming out to explain itself very well, and we haven’t seen our ministers, our prime minister, for a very long time now,” she said.

The island has a population of about 900,000. About 54 per cent of Fijians have received at least one dose of the AstraZeneca or Sinopharm vaccines, according to official data, while almost 9 per cent have received a second.

The three latest deaths were all over the age of 50 and had not been vaccinated, and died at home or on their way to a health centre, the ministry said in a statement.

In comparison, New Zealand’s total death since the start of the pandemic sits at 26. There are currently no community cases in New Zealand.

The Fiji health ministry said that to date, it had recorded a further 15 COVID-19 positive patients who died from the serious medical conditions they had before they contracted the virus.

New Zealand has provided Fiji with $NZ40 million worth of aid and support in recent times, Ardern said.

“We have provided support in the form of PPE and of course the commitment we’ve made around AstraZeneca vaccines, which is what Fiji are using for their roll-out,” Ardern said.

New Zealand medical regulatory body Medsafe is yet to approve AstraZeneca, but Ardern said Fiji was made aware of the approval process and timeframe. New Zealand has also contacted Australia about helping Fiji with vaccines.

Ardern said Bainimarama had acknowledged that New Zealand had sent over one member of the New Zealand Defence Force and another medical officer to support Fiji’s work on infection control.

Papua New Guinea is also battling a jump in infections.