Javid Nazari hasn’t been to work this week. The 26-year-old Eltham man can hardly eat or sleep from worry.

At the age of 15, Mr Nazari fled Afghanistan alone in 2010 and tried to reach Australia by boat. After three months in detention on Christmas Island and seven months in Melbourne community detention, the Hazara man – then a teen – was granted permanent residency as a recognised refugee. 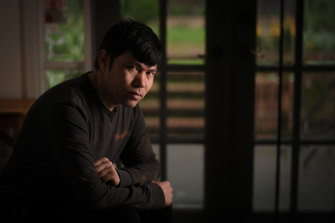 Javid Nazari, 26, is desperate to get his wife to Australia. Credit:Eddie Jim

He has since become an Australian citizen, learned perfect English, gained a TAFE qualification and become a youth worker caring for those in child protection and out-of-home care.

But instead of working, he’s spent this week calling his 25-year-old wife in Afghanistan every few hours to check she is safe after the Taliban – who were the reason he fled his home country – officially took control of Afghanistan.

Mr Nazari is one of hundreds of Afghan refugees who fled to Australia, were subject to harsh detention policies and are now pleading for government assistance to rescue their families. 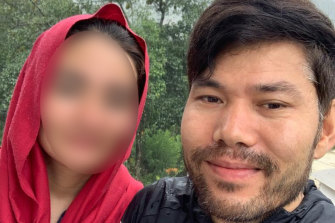 Javid is desperate to get his wife (pictured) to Australia. She lives in Ghazni on the outskirts of Kabul.

His wife, who Mr Nazari is scared to name in case it puts her in danger, lives in Ghazni – a city 120 kilometres from the capital, Kabul. Ghazni fell to Taliban rule earlier this month. The group closed down the school where Mr Nazari’s wife was studying maths and English.

The pair met in 2014 when Mr Nazari went to Pakistan to visit family. Two years later they were married in Pakistan on another visit and in 2017 they lodged the paperwork for a partner visa so they could be reunited in Australia.

“The Home Affairs Department says the process should take 14 or 15 months,” he says. “It’s been four years.”

His wife has passed all Australian government-required medical and biometrics tests for the application. Mr Nazari can pay for all the costs involved for the visa and any flights and quarantine, and if she was granted a visa their respective families would try to get her to Pakistan or Iran so that she could fly her to Australia from there.

Mr Nazari then applied for a visitor visa for his wife as a short-term measure – but that secondary application was rejected two weeks ago.

It’s a similar situation for Melbourne man Ahmed – not his real name as he fears speaking publicly could jeopardise his chance of a positive outcome with the Home Affairs Department.

The 36-year-old tradesman is also a Hazara Afghan, and also tried to reach Australia in 2010. He spent two years in detention before being granted permanent residency.

He has been desperately trying to secure a partner visa for his Hazara wife who is living in Quetta, a city on the border of Pakistan and Afghanistan.

They applied eight years ago. Ahmed has been told by Home Affairs staff that even though he has been recognised as a refugee and is a permanent resident, the partner visa is not a priority because he came by boat.

Although his wife is no longer in Afghanistan, Hazaras are also a targeted minority group in Pakistan, with suicide bombings common in the areas where Afghans live.

“Every day I call her at the same time and she cries and I cry here,” he tells The Sunday Age, through tears. “We haven’t seen each other since 2016″.

Ahmed says his wife was studying medical science, but has recently dropped out due to her long-term depression. He is terrified she may self harm, and knows of another Afghan man in Australia whose wife suicided after being separated for so long.

“Afghans here in Australia, we just want to be with our families,” he says. “In lockdown people are struggling when they can’t see their families for like a week or two, but there are all these people who are suffering from the last 10 years.″⁣

The ripple effect of Australia’s immigration policies on those who fled from the Taliban is also being felt in the US this week, where hundreds of refugees held by Australian authorities in offshore detention have been resettled.

Mohammed, 37, was resettled in the US in 2019 after seven years in detention on Manus Island after he tried to reach Australia by boat.

The Hazara man, who fears publishing his last name could have repercussions for his family, now lives in North Carolina working as a house painter, after stints in Arizona and Texas.

In that time he’s experienced homelessness, worked in industries where he was underpaid and exploited and struggles to carry out day-to-day tasks due to post-traumatic stress. 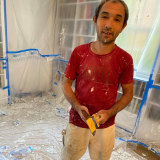 Mohammed, 37, a refugee from Afghanistan who spent seven years on Manus Island after trying to reach Australia by boat.

But this week, the fall of Kabul has mentally crippled him – he is desperately worried about his wife and two teenage sons who are living in the capital city.

“I can’t sleep, I can’t go to work. Everything – this situation, my depression is too much,” he tells The Sunday Age.

With the Taliban circling their neighbourhood, Mohammed’s sons were among the thousands of people who unsuccessfully tried to get on flights out of Hamid Karzai International Airport in Kabul this week.

Although he’s been in the US for 22 months, Mohammed’s green card is yet to be issued. Without it he has no avenue to apply for visas for his family to join him.

North American Refugee network Ads-Up, which is run by Australian expats and volunteers to assist refugees sent from Australia, holds grave fears for the Afghan refugees they support, including Mohammed.

“These folks have already spent upwards of eight years separated from parents, partners and children, first by Australian refugee policies, then by American bureaucracy and now potentially by the Taliban takeover,” says Ads-Up co-founder Ben Winsor.

“The fear they feel for family members back home is very real.

“All anyone really wants to do after eight years in immigration limbo is look forward and build a life of safety and opportunity for themselves and their families.”

This week the Australian government announced that it would accept an initial humanitarian intake of 3000 Afghans over the next year – which would come out of Australia’s existing 13,750-person annual program.

A Home Affairs spokesperson said priority would be given to persecuted minorities, women and children and those with family already in Australia, but confirmed that family visa applications related to those who arrived by boat were “lowest priority” under Ministerial Direction 80 of the Migration Act. This is the case even if they have already been granted citizenship.

“This direction is consistent with the government’s policy intentions in relation to the size, composition, and integrity of the migration program and the management of the Australia’s border,” the spokesperson said.