An Afghan mother gave birth aboard a US military plane after it landed at a base in Germany.

Air force officials said the woman gave birth to a baby girl at the Ramstein Air Base after experiencing complications on a flight coming from an intermediate staging base in the Middle East.

The aircraft commander on the US Air Force C-17 decided to “descend in altitude to increase air pressure” in the plane, which helped to “save the mother’s life”, Air Mobility Command said on Twitter.

Upon landing, medical support staff came aboard the aircraft and helped deliver the baby in the cargo bay.

Both mother and child were “transported to a nearby medical facility and are in good condition”.

The tweet said: “Medical support personnel from the 86th Medical Group help an Afghan mother and family off a U.S. Air Force C-17, call sign Reach 828, moments after she delivered a child aboard the aircraft upon landing at Ramstein Air Base, Germany, Aug. 21. 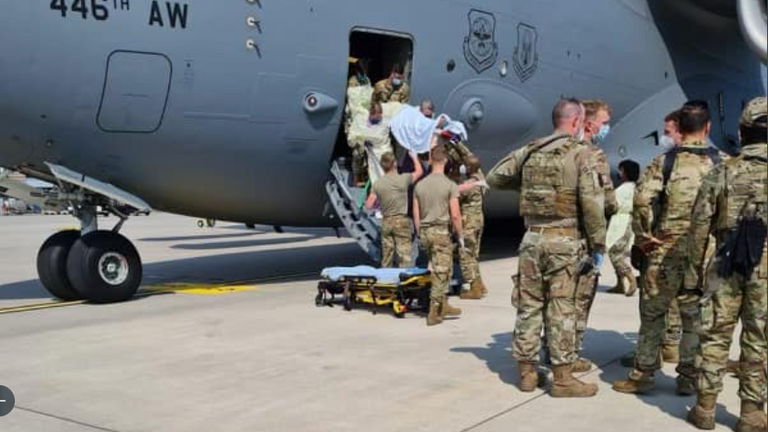 “During a flight from an Intermediate Staging Base in the Middle East, the mother went into labour and began having complications. The aircraft commander decided to descend in altitude to increase air pressure in the aircraft, which helped stabilize and save the mother’s life.

“Upon landing, Airmen from the 86th MDG came aboard and delivered the child in the cargo bay of the aircraft. The baby girl and mother were transported to a nearby medical facility and are in good condition.”

Several social media users responded to the post, with one saying “these people are heroes” and another writing “This is so amazing, I love the military and I’m proud to be an American”.

Evacuation missions by US and British troops have been taking place in Afghanistan following the Taliban takeover of the country.