NEW DELHI: Under a highway bridge in New Delhi, where a large protest had shut down several lanes of traffic, a coterie of veteran dissidents took turns speaking: men with shaggy beards, singers strumming guitars, social activists so impassioned that spit flew from their wet lips.

But a jolt of electricity passed through the crowd when a slight woman – younger, smaller and more vulnerable-looking than anyone else – stepped up to the mic. 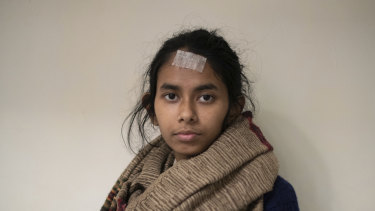 Aishe Ghosh, president of the student body at Jawaharlal Nehru University, in New Delhi. Since being attacked by Hindu nationalists at her New Delhi campus, Ghosh has become an icon in India’s growing protest movement.Credit:Rebecca Conway/The New York Times

She carried no notes. She wore a bandage on her forehead. Her arm was in a cast.

“Many people ask me whether I’m scared,” she began. “And I tell them: How can I be scared?”

People nodded their heads, seeming to follow her words carefully.

She wasn’t frightened of Amit Shah, the home minister, she said, or Narendra Modi, the domineering prime minister who has sent India down a Hindu nationalist path.

“Even if you beat us, we won’t step back,” she thundered. “Long live the revolution!”

The biggest and most energised protests India has witnessed in a generation are sweeping the country, and one young woman has been thrust to the fore: Aishe Ghosh. 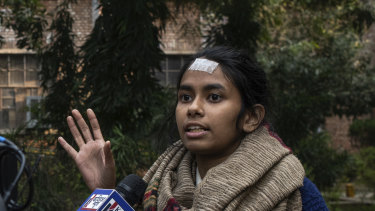 Earlier this month, while leading a peaceful demonstration on her university campus, Ghosh was attacked by Hindu nationalist goons. After they cracked her in the head with an iron bar and thrashed her body, images of her blood-smeared face were instantly beamed nationwide.

But it was the photograph made two days later that etched her into the Indian psyche: It showed Ghosh, 25, staring straight into the camera, her head wrapped in a doughnut of white medical tape, her hair wild and her eyes radiating a resolve that seemed indestructible.

“Every protest has a face,” said Vidit Panchal, a young doctor who traveled across India this week to meet her.

Ghosh is that face.

The product of politically active parents from West Bengal, Ghosh was a talented painting student before she entered university to study politics. Last fall she was elected president of the student body at one of India’s liveliest and most prestigious schools, Jawaharlal Nehru University, a bastion of anti-Modi dissent.

Even in the weeks before she was attacked by the gang of Modi’s supporters, Ghosh was marching in protests, coordinating strikes and recruiting followers – in essence, galvanising the resistance. Now, she is being invited everywhere to speak.

To be a student leader in India, it’s a thrilling time.

“Professors have been writing mails to us saying that you should be going to the protests, because protests teach you more than I can teach you in the four walls of the classroom,” Ghosh said, clearly excited by all this. “We have politicised so many people. It gives me so much pride.”

Ever since modern India was envisioned, a fundamental question has been how Hindu-oriented it should be, given that the population, about 80 per cent Hindu, has long hosted a dizzying array of different cultures. They include a Muslim minority that today, at 200 million people, would on its own be one of the largest Muslim nations in the world. Modi has taken a clear position, pushing a slate of divisive Hindu nationalist policies that play quite well with a large segment of society but deeply worry minorities and progressives.

“A Germany in the making,” Ghosh calls it.

Since Modi’s reelection in May, his government has ploughed ahead with a contentious citizenship review in northeastern India that is widely seen as a test run for a nationwide attempt to identify and marginalise Muslim families. In August he summarily deleted the statehood of Kashmir, which had been India’s only Muslim-majority state.

These moves raised some eyebrows, especially in rival Pakistan, which also claims Kashmir.

But the issue that sent millions of Indians over the edge was Modi’s new citizenship law, which creates a special path to Indian citizenship for migrants from all major South Asian religions bar one: Islam.

Modi has insisted that the law is intended to protect persecuted migrants from neighbouring countries, but many Indians see it as blatantly anti-Muslim and discriminatory. As soon at it passed in December, universities across the country exploded in protest.

Jawaharlal Nehru University, in central New Delhi, where Ghosh is working on a master’s degree on climate change, has been one of India’s most reliable incubators of dissent. It’s a big leafy campus, known for its liberal arts programs, and on a recent day professors and students mingled in a sun-dappled courtyard between hulking brick buildings painted with images of Mandela, Gandhi and Guevara.

These days, Ghosh has trouble making it across campus because she is stopped so often.

“Are you OK?” one young woman asked.

“You have amazing energy and stamina,” said another.

“Please don’t get beaten up again!” a friend laughed.

It was a chilly day under a thick gray sky, and Ghosh, in bare sleeves with an anaconda-size scarf cinched around her neck and a permanent smile on her face, was hard to miss.

She seems to have natural political skills. She lets people finish before she starts talking; she speaks well in public; and she constantly absorbs digs, like body shaming.

For a long time, Hindu extremists have hated this school, and January 5, the shock troops arrived.

That evening, Ghosh was speaking at a protest against a fee increase at her university.

Witnesses said the attackers were a mix of students and outsiders from pro-Modi groups. They targeted liberal leaders at the university and others who had been vocal about their opposition to Modi’s Hindu nationalist policies. A Hindu extremist group later admitted to participating in the melee, saying it had armed followers in self-defence.

The attackers carried iron bars, pipes and sledgehammers, and they knocked Ghosh to the ground and kept hitting her and hitting her.

“I thought I was going to die,” she said.

There’s a grim, new joke in India: There may be freedom of speech, but there’s no freedom after speech.

After speaking out about her beating, Ghosh became the victim of a vicious disinformation campaign. Hindu extremists spread fake pictures of her, showing her cast on the other arm and saying she was lying. They even said that she had smashed her own head with an iron bar.

Police officials then accused her and other leftist students of instigating the violence, which she denies.

Ghosh grew up in Durgapur, near Kolkata, a hotbed for India’s communists. Her father works as an operations manager at a thermal plant and has joined many labour strikes. Her mother is a housewife.

She has one younger sister, and during teatime, the Ghosh family sat in their two-bedroom apartment and dissected politics.

An old college friend, Yashvi Pandit, laughed about when she first met Ghosh, seven years ago. “She would be going on and on about this joint secretary appointment or that,” she recalled, “and we were all like: Why do you care? And now look: She’s gotten a blue tick!”

(Ghosh recently received a coveted blue tick on Twitter next to her name, signifying that she is a person of interest who has been verified as genuine.)

Ghosh has not seen her parents since she was attacked, even though they wanted to visit. She has barely spent time with her boyfriend (another student activist) either. She is in the middle of a moment – and she seems well aware of it.

“With all that’s going on,” she said as she hurried off to another protest, “I'm busy.”