Never before has an unelected Government adviser been so powerful – and divisive.

The Prime Minister’s right-hand man and self-proclaimed architect of Brexit, Dominic Cummings, has already been depicted in a TV film by Benedict Cumberbatch and was the subject of a BBC documentary this year.

He has seemed to revel in his reputation as the ‘dark puppeteer’ – complete with his scruffy attire, abrupt tone and disdain for the Press. But to many, revelations that he may have breached lockdown rules are a controversial step too far. Here the Mail analyses the allegations against him.

To many, revelations that Dominic Cummings (pictured) may have breached lockdown rules are a controversial step too far

March 23, 2020 was the day Britain was placed into lockdown. Boris Johnson told Britons they should only leave home for one of four reasons: To shop for essential items, to exercise once a day, to travel to and from work where it was ‘absolutely necessary’ or to fulfil medical or care needs.

Those who had any symptoms of coronavirus were told to stay at home for at least seven days. Other members of that household were told they must self-isolate for 14 days.

The Government unveiled its message ‘Stay home. Protect the NHS. Save lives’ – which would have been drafted with the help of Mr Cummings. Then, four days after lockdown was imposed, Mr Johnson and Health Secretary Matt Hancock tested positive.

The following day, local police received a report he was at the rural Durham farmhouse of his parents Robert, 73, and Morag, 71 – 265 miles from his London home.

It is thought Mr Cummings travelled there on March 27 or 28 – shortly after his wife, Mary Wakefield, began showing symptoms. 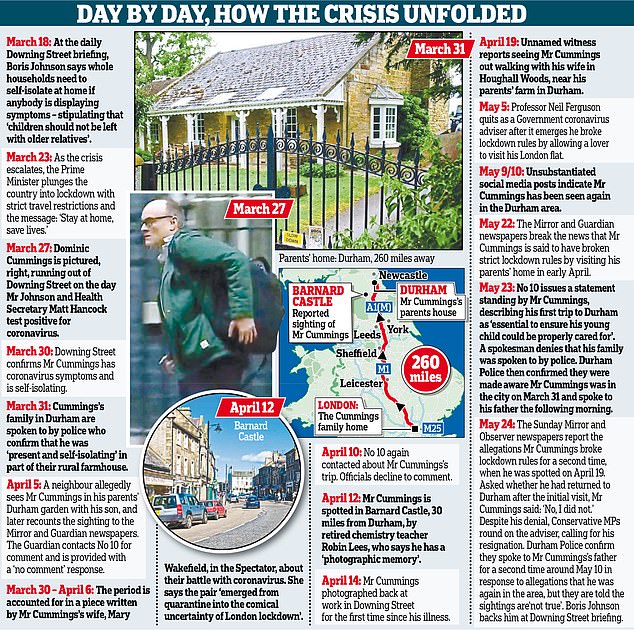 Such a move would have been hugely at odds with Government guidance as Mr Cummings could have looked after their young child in London while his wife recuperated.

At around 5.45pm on April 5, an unnamed neighbour spotted him in his parents’ garden with his son – with Abba’s Dancing Queen being played in the background.

The neighbour said: ‘I got the shock of my life. I was really annoyed. I thought “It’s OK for you to drive all the way up to Durham and escape from London”. It’s one rule for Dominic Cummings and one rule for the rest of us.’

In response to questions last week, No10 said Mr Cummings travelled to Durham as his sister and nieces had volunteered to look after his four-year-old son.

At the weekend deputy chief medical officer Dr Jenny Harries said travelling during lockdown was permissible if ‘there was an extreme risk to life’ with a ‘safeguarding clause’ to prevent vulnerable people being stuck at home with no support. She added that a small child could be considered vulnerable.

But rather than Mr Cummings’ son staying with other family members, he was in fact with his parents in a farmhouse adjoining the main property. Food was left by Mr Cummings’ sister at the door.

The trip would appear to fly in the face of strict lockdown rules as both parents were showing symptoms and could have taken advantage of help elsewhere in London.

Parents’ home: The home of Cummings’s parents in Durham, 260 miles away, which he visited during lockdown

COULD THEY HAVE STAYED IN LONDON?

Mr Cummings has insisted the Durham trip was necessary for the well-being of his son. The boy would likely have contracted a mild version of the illness, if at all, by staying with his parents.

In contrast, Mr Cummings’ elderly parents were at a much higher risk of contracting a severe and potentially fatal form of Covid-19 – making his actions appear all the more reckless. Family friends have pointed out that his wife, Mary Wakefield, has a brother, Jack, who lives in London with his own young son. She also has a half-brother, Max, who lives in the capital.

It has also been suggested it may have been more sensible for a family member to travel from Durham south to help the Cummings .

On April 12, his wife’s birthday, Mr Cummings and his family were allegedly spotted 30 miles from Durham in the town of Barnard Castle. Retired chemistry teacher Robin Lees, 70, said he was ‘gobsmacked’. Although Mr Cummings could have theoretically completed a 14-day isolation period to recover from symptoms, the Government guidance were still clear: Stay at home and avoid unnecessary travel. Mr Lees said: ‘They looked as if they’d been for a walk by the river. It didn’t seem right because I assumed he would be in London. You don’t take the virus from one part of the country to another.’ 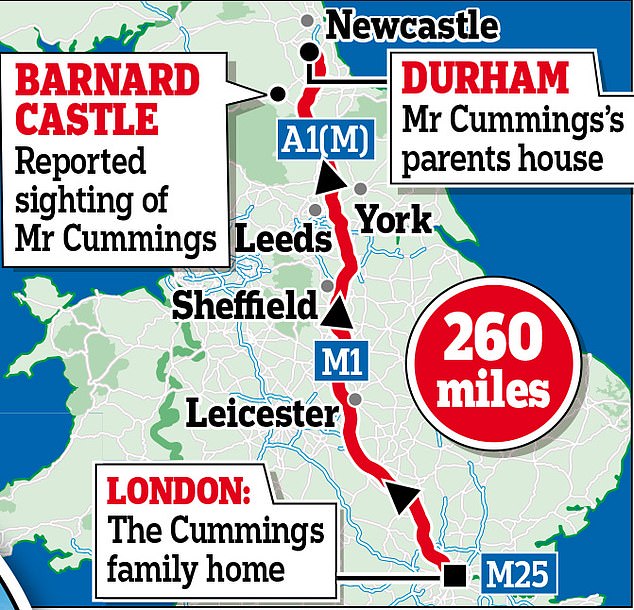 London-to-Durham: The 260-mile journey that Cummings made to reach the home of his parents in Durham

Like all good journalists, Mary Wakefield did not miss an opportunity to turn personal difficulty into tantalising copy. As commissioning editor of political magazine The Spectator, the baronet’s daughter described her and her husband’s battle with coronavirus for a late-April edition.

She said she initially contracted symptoms before Mr Cummings rushed home and ‘collapsed.’ She explained: ‘I felt breathless, sometimes achy, but Dom couldn’t get out of bed. Day in, day out for ten days he lay doggo with a high fever and spasms that made the muscles lump and twitch in his legs. He could breathe, but only in a limited, shallow way.’

Then, in a conclusion which contradicts the sightings in Durham, she said the family ‘emerged from quarantine into the almost comical uncertainty of London lockdown.’ On April 14, Mr Cummings returned to work at Downing Street.

A witness claimed to have seen Mr Cummings at Houghall Woods, a beauty spot near his parents’ home in Durham, on April 19.

He was overheard remarking that the bluebells are ‘lovely.’ The witness said: ‘We were shocked and surprised to see him because the last time we did was earlier in the week in Downing Street. 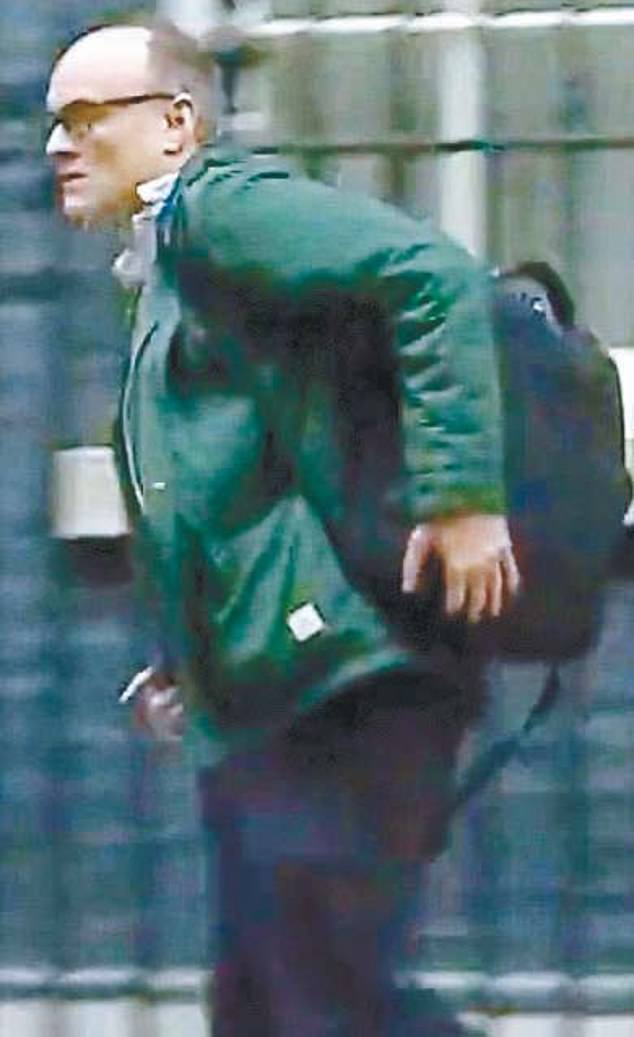 ‘We thought “He’s not supposed to be here during lockdown”. We thought “What double standards, one rule for him as a senior adviser to the Prime Minister, another for the rest of us.” When asked yesterday whether he had been to Durham a second time in April, Mr Cummings said: ‘No I did not’.

On May 10, rumours begin to circulate on social media that Mr Cummings had again been seen in the Durham area. A police source yesterday told the Telegraph officers contacted Mr Cummings’ father around this time but were assured the sightings were not true.

When news broke of the alleged lockdown breaches late on Friday evening, Downing Street described Mr Cummings’ actions as ‘essential’ and ‘in line with coronavirus guidelines’. A further No10 statement said: ‘At no stage was he or his family spoken to by the police about this matter.’

Durham Police later issued a statement saying they had been made aware of his presence in the city on March 31 and spoke to his father the following morning.

Mike Barton, ex-chief constable of Durham Police, yesterday insisted Mr Cummings ‘broke the law’. He said: ‘The deputy chief medical officer…made it really clear – it’s got to be a life-threatening issue that allows you to break the coronavirus lockdown.

‘This was not life-threatening, so let’s not beat about the bush.’ 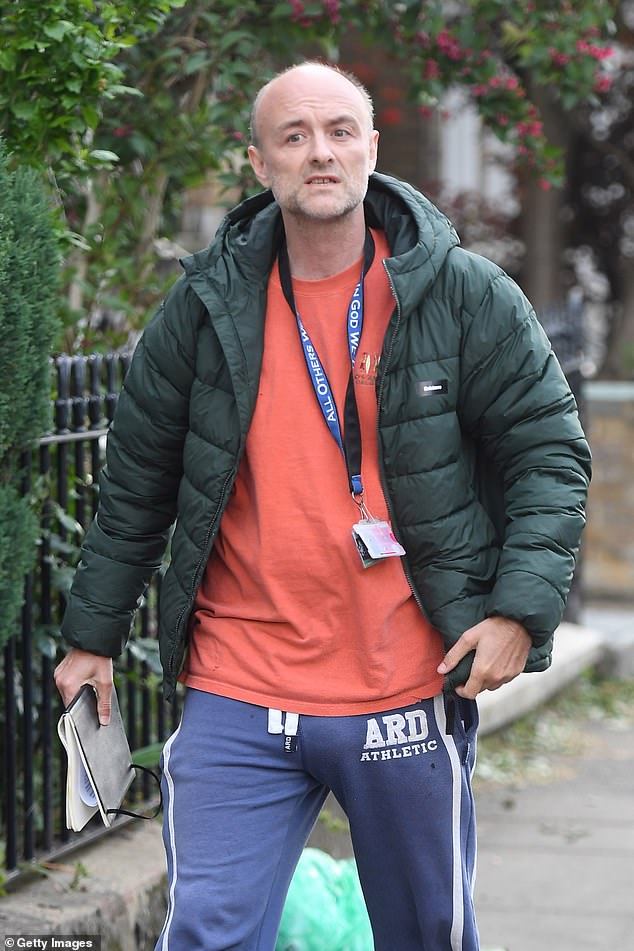 When news broke of the alleged lockdown breaches late on Friday evening, Downing Street described Mr Cummings’ actions as ‘essential’ and ‘in line with coronavirus guidelines’