‘In the hell of battle, they were there for each other, even to death’: Hundreds of people gather as 13 unknown British and Commonwealth soldiers from WWI are buried in Belgium

Hundreds of mourners gathered today to mark the burial of 13 unknown soldiers who died fighting in Belgium in the First World War.

The unidentified war dead – all from the UK and Commonwealth nations – were buried side-by-side with full military honours near Ypres.

Shots from the gun salute rang out across the quiet clearing, the same Flanders field where the men lost their lives.

The poignant ceremony at Wytschaete Military Cemetery formed one of the final chapters of the Dig Hill 80 project, which discovered the remains of 110 soldiers.

Father Patrick O’Driscoll, chaplain to the 1st Battalion The Royal Regiment of Fusiliers, conducted the service, starting at 11am. 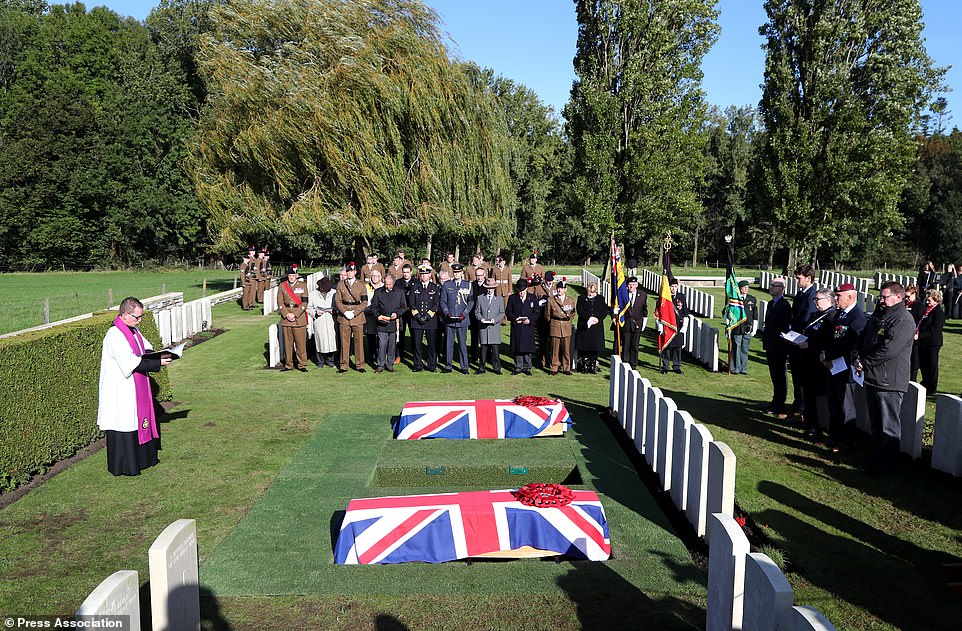 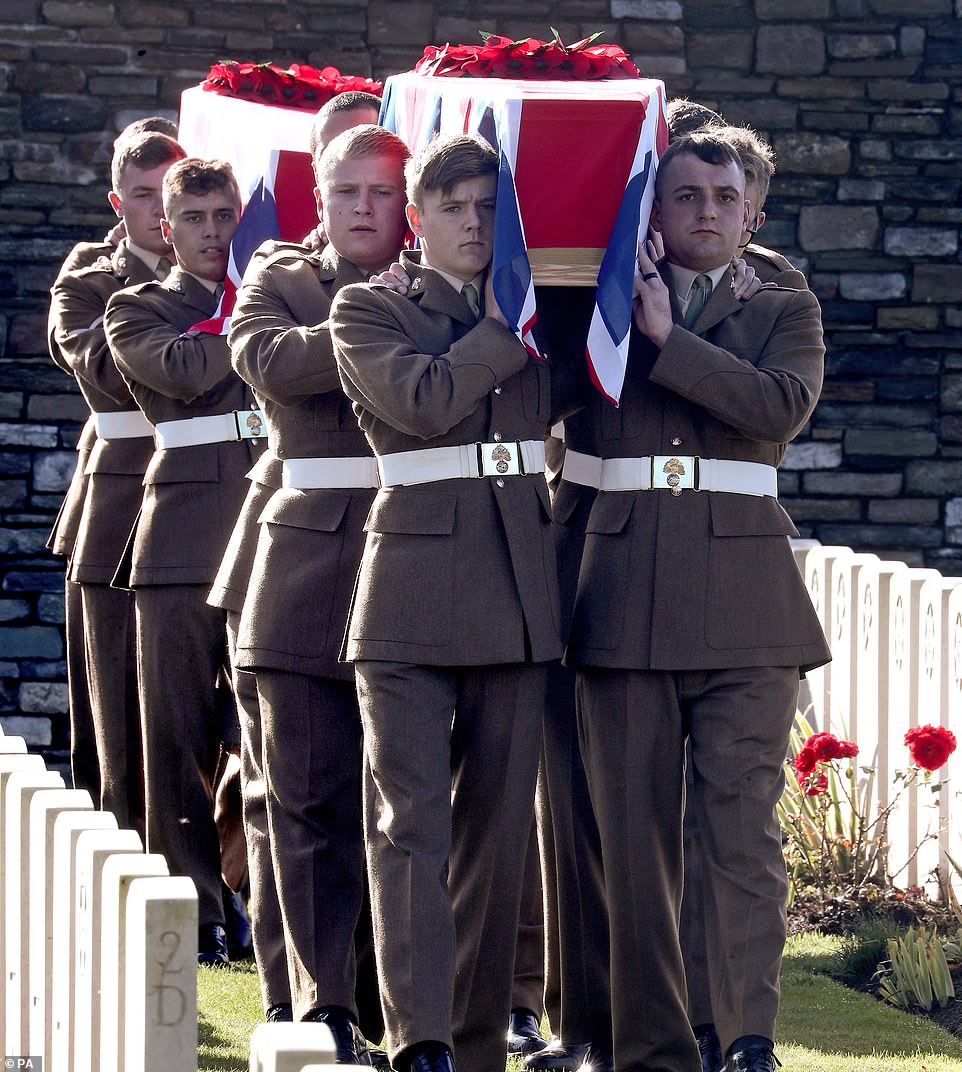 Soldiers from the 1st Battalion The Royal Regiment of Fusiliers carried the coffins of the two unknown soldiers identified as British to the final resting place in Ypres, Belgium

He spoke of the symbolism of the red poppy and the need for enduring peace.

He said: ‘We are gathered in fellowship today before God to remember those who have made the supreme sacrifice by the giving of their lives in the service of their country.

‘We remember and pray for all those who have suffered, and who still suffer, as a consequence of war.

‘Finally, we pray for peace and reconciliation – especially remembering those with the responsibility for the leadership of nations – that conflict may be avoided, and peace prevail among all people.’

The service was attended by representatives of armed forces from various nations, there to pay their respects to the fallen 13 men.

Two of the unknown soldiers – identified as British – were carried to the ceremony by soldiers from the Fusiliers and Union Jack flags were draped over the coffins.

The remaining 11 war dead were buried in a third coffin before the service began.

Father O’Driscoll paid tribute to the ultimate sacrifice made by the 13 soldiers as he addressed the crowd.

He added: ‘We come together today to remember and thank these men for their great sacrifice in fighting and dying together as one. 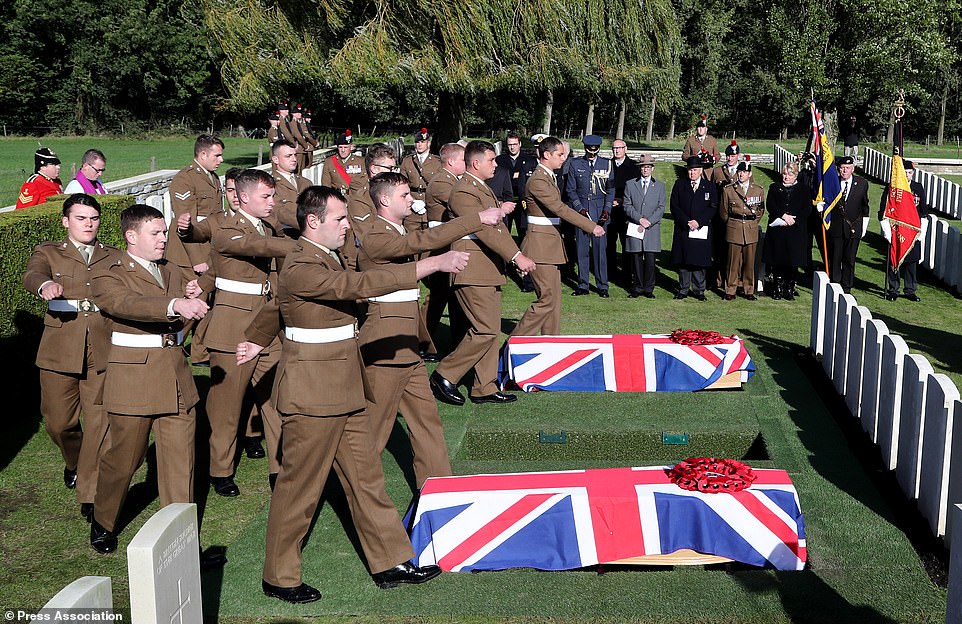 Soldiers preparing to bury two coffins. The burial with full military honours is the culmination of the ‘Dig Hill 80’ project that discovered the remains of the soldiers in 2018 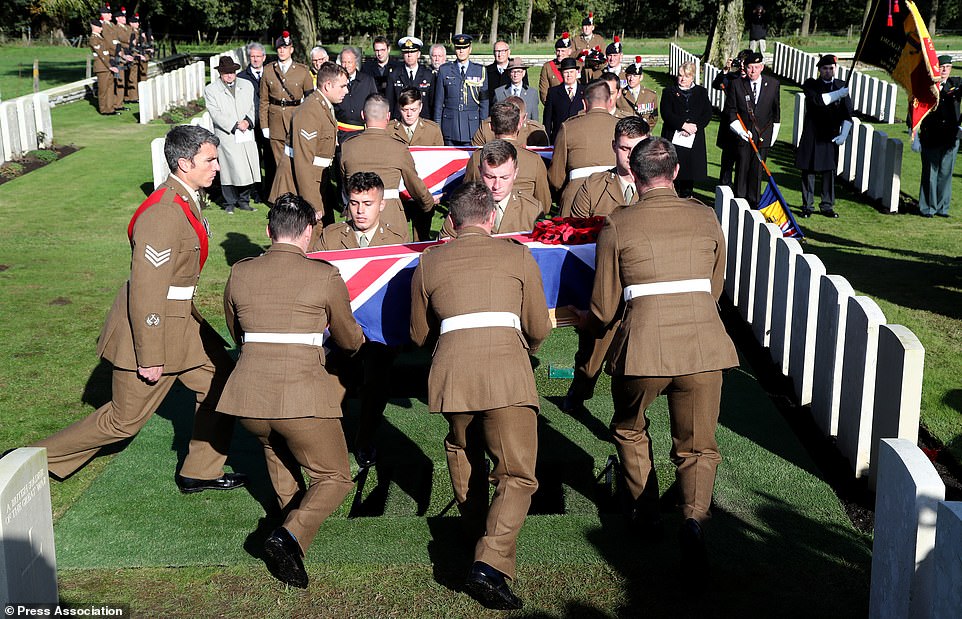 ‘Even though we do not know their names, we remember their humanity and courage and that even in the hell of battle they were there for each other even to death.

‘So in prayer and celebration, we place these men together in this consecrated and special ground, so that they rest in peace and we learn and make sure humanity endures in its fullness.

‘As we commit the remains of our brothers to the deep, grant them peace and tranquillity.’

After the burial, shots from the traditional four-gun salute to the fallen echoed across the quiet clearing.

The Exhortation was read out, with guests repeating the famous promise: ‘We will remember them.’

Music was performed by a joint venture between British and German schoolchildren, to symbolise peace and co-operation.

Pupils from Mildenhall College Academy in Bury St Edmunds and St Joseph’s College, Ipswich, formed the contribution from the UK.

The service came as a result of the hard work of those at the Dig Hill 80 project, who excavated Hill 80 – the site of a German gun emplacement where many UK and Commonwealth soldiers fell.

The project led a 1.1-hectare crowdfunded archaeological excavation, which took place at the former site of Hill 80 in Wytschaete, on land that had been allocated for future housing development. 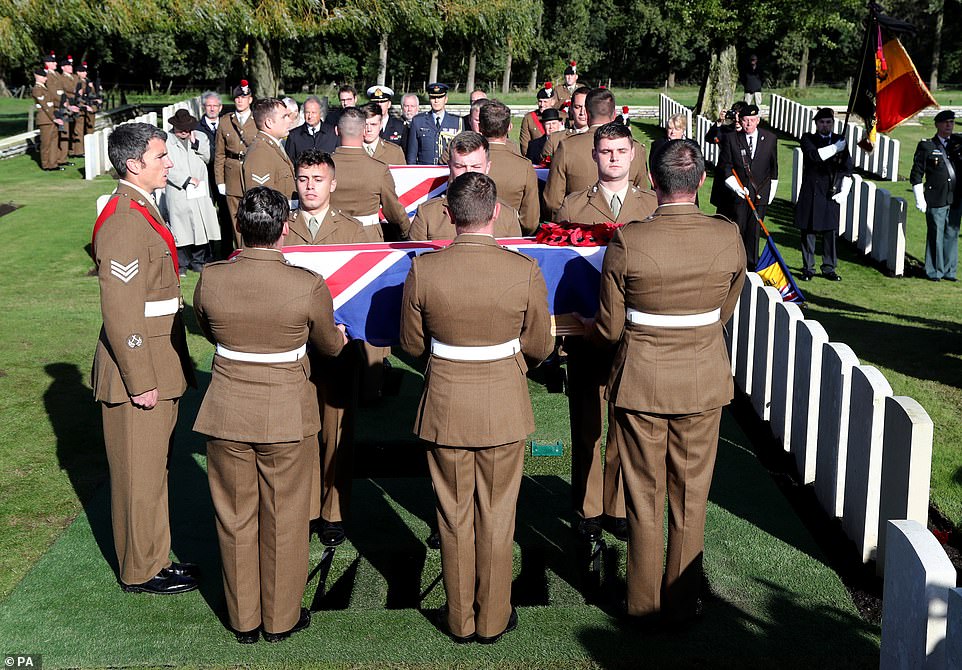 Coffins arriving for a burial service at the Commonwealth War Graves Commission’s Wytschaete Military Cemetery, near Ypres, Belgium, for thirteen unknown soldiers who died fighting in Belgium in the First World War

The project excavated 550 metres of trenches and 430 bomb craters, with the remains of 110 soldiers discovered, including British, French, German and South African personnel.

It has not been possible to identify the 13 unknown soldiers who were buried today, but at least two are believed to be British.

Three Commonwealth War Graves Commission (CWGC) headstones will mark their collective final resting places, which will be cared for by the commission in perpetuity.

In keeping with burial tradition, the casualties were interred together, ensuring that those who served and died together are buried and commemorated together.

Hill 80 was the site of a windmill before the First World War, but became an entrenched German gun position following the capture of the village of Wytschaete in 1914.

The location afforded observational advantage to the Germans as it overlooked the town of Ypres and formed part of the Messines Ridge.

The site remained in German hands until the Battle of Messines in June 1917, when it was recaptured.

In 1918, Hill 80 was again taken by the Germans during the Battle of the Lys, before finally returning to Allied hands in September 1918.

Dig Hill 80 head archaeologist Simon Verdegem said: ‘It is now about a year since the investigation into the soldiers of Hill 80 was completed.

‘Thanks to massive international support from individuals and organisations, enough money was raised through crowdfunding to make a detailed excavation possible. 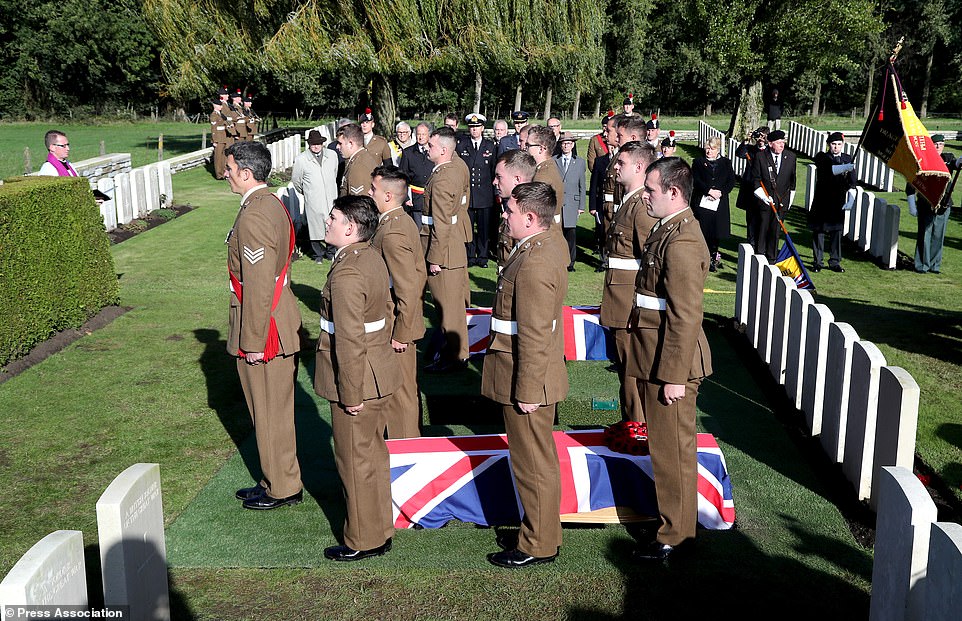 Coffins arriving for the burial service today. The Dig Hill 80 project excavated 550 metres of trenches and 430 bomb craters, with the remains of 110 soldiers discovered, including British, French, German and South African personnel

‘The aim was not only to excavate the trenches but also to recover the soldiers. Now, the British and German soldiers will finally be given a definitive and dignified resting place along with their comrades. I dare to believe that it gives them peace, knowing that people from all over the world have joined forces to recover their mortal remains.

‘In my opinion, this can count as a symbol of peace and reconciliation.’

‘And it’s a credit to the team who excavated Hill 80 that they have recovered these men at last, who will now be laid to rest with former comrades, and cared for in perpetuity by the Commonwealth War Graves Commission.

‘It is sad that the men cannot be identified individually, but they will never be forgotten, by their nation, or by the people of Flanders who always show such respect for our war dead.’

The German soldiers discovered on Hill 80 will be laid to rest on Friday at the German war cemetery in Langemark.