100,000 five-year-olds haven’t had polio booster: Worrying figures show lack of protection among the young as deadly virus is found in London

Tens of thousands of children in England are unvaccinated against polio, figures show.

Uptake varied from a low of 55.8 per cent in the London borough of Camden to a high of 96 per cent in County Durham.

It comes as the UK Health Security Agency declared a national incident after detecting samples of poliovirus at a London waste water site since February.

It warned the deadly virus was likely to be circulating in England for the first time in almost 40 years, with the last confirmed case in 1984 and the UK declared polio-free in 2003.

A health minister yesterday said it might be possible to trace the source of the samples to an individual household or street. This would allow those infected to be isolated and those living in the area to be targeted with a vaccination drive. 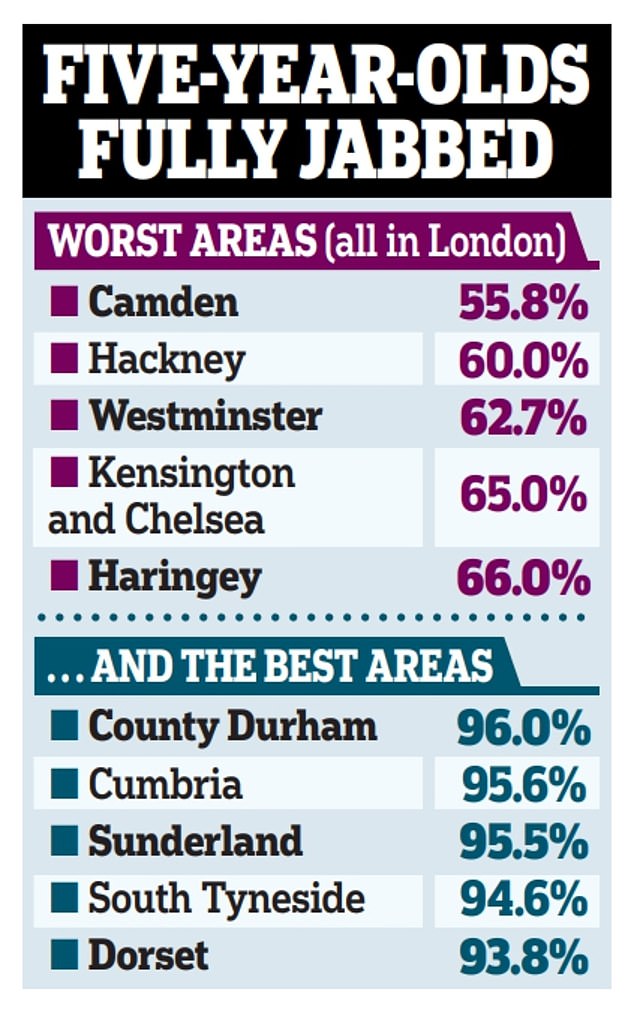 Polio mainly affects the under-fives, attacking the nervous system and causing paralysis in up to one in 100 cases. It can prove fatal if it affects the muscles responsible for breathing. There is no cure.

More than a third of all unprotected five-year-olds (34,105) are in London, according to data published by NHS Digital.

London councils occupy the bottom 21 places, with Birmingham 22nd worst and Liverpool 26th worst out of 148.

Kripen Dhrona, chief executive of the British Polio Fellowship, said: ‘The discovery of the poliovirus in waste water is worrying. We need to increase vaccination rates to limit the spread of the virus and to protect people from its devastating effects.

‘I would urge parents to vaccinate their children as I would not want them to see their child go through the ordeal of catching polio.’